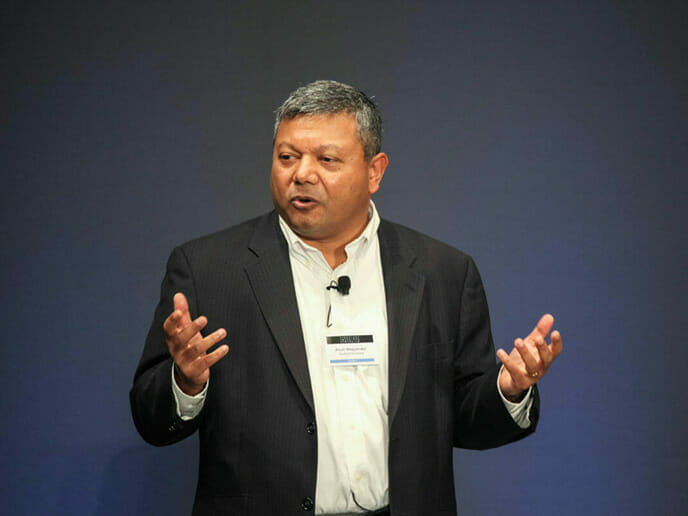 The system is an example of the innovation under way in the most cutting-edge energy systems, said Arun Majumdar, Jay Precourt Professor at Stanford University, who spoke during the Fiduciary Investors Symposium at Stanford.

The race to introduce new systems is paramount, given the little headroom left to cap carbon if the world is to contain warming at less than 2 degrees. Yet decarbonisation must be balanced with continued economic growth, particularly in many regions of the world that still have poor access to electricity. It also needs to run parallel with the huge growth in the world’s megacities, Majumdar said.

Natural gas would be one gamechanger, he predicted. It is an abundant resource, and it has decoupled from oil prices in markets. Majumdar forecasted a massive increase in liquefied natural gas trading and new technologies, making production cheaper still. He noted that renewables were now the cheapest way of generating electricity in many parts of the world. They are undercutting nuclear in California, as evidenced by the state shutting down its last nuclear power plant, Diablo Canyon. Switching from coal will cause “social dislocation” in India, where he noted coal was becoming a stranded asset.

The challenge is now adapting electricity grids never designed for volatile generation to take solar and wind power. Data and digitisation would play a key role in integration, Majumdar said. Developing grids to balance volatile energy supplies from renewables is a “common problem in California and around the world”, he explained. Storage is one solution but it work across days, or even a season, to be available for days when renewables aren’t generated.

“Are there solutions today? No. Are there some promising [potential] solutions? Yes,” he said.

Developments in batteries would usher in more electric vehicles, with real penetration in the next five years, he predicted. Majumdar noted that electricity utilities were “beginning to talk” to the automotive industry to prepare for the rise of electric vehicles so that grid services and mobility services could work together. Some oil majors are preparing for the threat of being squeeze out, he said. Royal Dutch Shell, whose chief executive, Ben van Beurden, recently said the world’s demand for oil could peak as soon as 2025. Galvanised by shareholder pressure, and helped by a strong balance sheet, the company bought UK energy supplier First Utility. Shell also has a large electricity trading arm in Houston, Texas. BP is also transforming its business, recently buying Chargemaster, the UK’s largest electric vehicle charging company.

The pace of innovation is gathering speed. Majumdar has noticed that, in recent years, incremental innovation has accelerated due to falling costs and improved performance. It means transformative ideas like solar, which first began in the 1960s, are now truly disruptive.

“It takes 20-30 years to bring down cost and then become disruptive,” Majumdar said. Finding future disrupters involves research and development, finance and scale. Policy is also important, nowhere more so than in the carbon price. Without a carbon price, it is difficult to integrate carbon capture or public acceptance, he said.