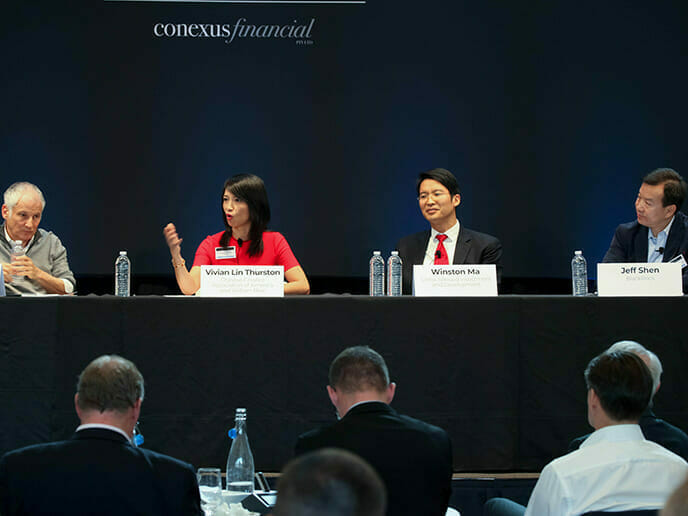 China is one of the most innovative and technologically advanced countries in the world, charging ahead in key areas such as automation, artificial intelligence, fintech, and electric vehicles, all backed by huge government investment.

“Innovation is one of the key drivers going forward for China and it is an investible theme,” said Vivian Lin Thurston, partner and China generalist at William Blair, and founder and chair of the Chinese Finance Association.

China is leapfrogging the US and other Western countries in mobile payments and social networking, she said.

Speaking at the Fiduciary Investors Symposium at Stanford University, Thurston said China was also pushing the development of its semi-conductor industry, which has been singled out for government support and investment to reduce China’s dependency on imports. China accounts for 60 per cent of the global demand for semi-conductors, she said.

China has the largest population of Millennials in the world. It is this group that is driving consumption of new technologies, delegates heard. Thurston also noted opportunities in healthcare, one of China’s most unpenetrated industries, as the population ages.

The panel discussed how China’s A-shares market is attractive, liquid and has a low correlation with the rest of world. It is also inefficient, offering opportunities for active investors. Jeff Shen, managing director, head of emerging markets and co-head of scientific active equity at BlackRock, said the inclusion of China A-shares in the MSCI market indices was a landmark change that warranted attention, and noted BlackRock’s enthusiasm for active management opportunities in China going forward.

China will be the undisputed global leader in AI by 2030, said Winston Wenyan Ma, chief executive of China Silk Road investment and development. He said Chinese tech companies were investing more than ever before in technology and putting more focus on new technologies. Up until now, most of their focus has been on developing the consumer-side of their businesses. He also said companies sought products that were invented in China, not just made in China.

“It doesn’t mean that Made in China goes” but, like Silicon Valley, China will become a hub of smart technology companies and unicorns, he explained. China also has a consumer market to test its technology products.

China’s A-shares market is characterised by millions of retail investors driving volume – 85 per cent of trading value comes from retail investors. Watching this retail sentiment is a key tenet of success and can be done by searching online trends and blogs, Shen said. Moreover, it is possible to spot trends and opportunity through satellite imagery, picking up construction sites and economic activity in China’s 160 cities. In a typical investment model, you think of macro trends and fundamentals, Shen said. Now it is possible to search online for factors driving sentiment.

Accessing the growth in China’s A-shares market is not straightforward. Mostly because China is “complicated” and investors don’t understand it, Thurston said. Along with being dominated by retail investors, China’s A-shares index is populated by state-owned industries (SOEs), which are less efficient and have poor governance and lower returns. It is why investors should favour active investment because passive strategies would lead to exposure to these laggards, Thurston said. In another trend, the panel highlighted opportunities from investing in foreign companies with a strong Chinese footprint, such as consumer goods groups. Risk factors include regulation, Thurston noted.

The panel also noted that because the market is so dynamic, there are many losers and winners. In a dynamic marketplace, just because you have exposure doesn’t mean you necessarily have a return. The conference also heard how centralised political control and censorship made for a different kind of innovation than what occurs in Silicon Valley.

Shen said it was important to understand that China is “not trying to become the US” but is looking for its own unique solutions. Political decisions are made that prioritise keeping the vast population happy and the Communist party in power. China’s mindset is to solve problems with one political system, so although it will take inputs from the US, it has a different approach, delegates heard.

Wenyanma noted that the government was supporting innovation at a local level and via tax reductions. The government often reimbursed losses if an investment went badly, he said. In contrast, Silicon Valley is supported by venture-capital money. Thurston called China’s model a hybrid of capitalism with one-party government. She described the Chinese Government as the senior management team of China Inc, allocating capital and managing society.