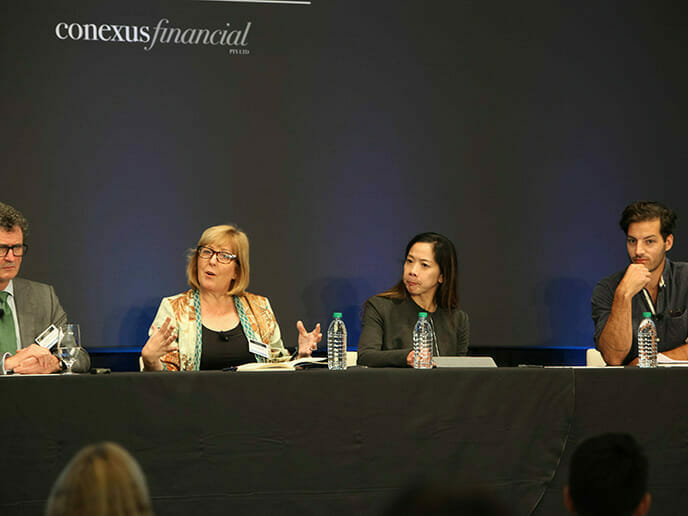 Investors have an important role in ensuring that advances in technology are managed from a human rights perspective, particularly workers’ rights. A panel of experts chaired by Fiona Reynolds, managing director of the Principles for Responsible Investment heard how there is little democracy in many workplaces, including the tech industry, many workers are on short-term contracts with little job security and few rights, and technology is making their positions even more precarious.

Investors have the influence to change things, said Deborah Ng, director strategy and risk and head of responsible investment, at Ontario Teachers’ Pension Plan. About 60 per cent of OTPP’s assets are invested in private markets, where investments are often direct, allowing direct access and communication with management. She told delegates that human capital issues are “top of the mind” and that the pension fund took care to understand how companies in its portfolio were managing human capital issues. She also said human capital management was important for driving the success of a business, since poorly engaged staff or high injury rates would damage long-term performance.

OTPP ensures investee companies have board oversight of human rights issues with a dedicated committee. Ng said if the pension fund has invested in a company in a disruptive sector, it asks that managing the potential impact on human capital be a part of strategy. She said it also checked to see that policies were enforced and requested the data and metrics to prove it.

“If we don’t see these, we know there is an issue,” she said.

Data needs to move away from disclosure and more to discovery and investors need to take more control over what they are discovering, rather than just relying on what the data is telling them, said Andrew Parry, head of sustainable investing at Hermes Investment Management. Parry also told delegates that the ‘S’ for social, in ESG, is often overlooked and pointed to the interconnected nature of many of the disruptions under way from climate change, technology and demographics. He said disruption would be significant across every industry and urged investors to focus their engagement activities on improving the quality of jobs. This can be done by putting pressure on employers to pay a living wage, and ensuring human rights throughout supply chains, particularly in the extractive industries.

Parry also told delegates that small islands of wealth and large areas of inequality were not good for long-term demand. He said this would ultimately create a fragility in long-term demand that would hurt companies’ ability to sell their products. It is about ensuring there are people left to buy products in the future, he said. He also noted that technology is changing the nature of work and demand and will impose decisions on society.

The investment community is increasingly shaped by a sense of purpose, Parry said. There is more focus on the purpose of a company and the purpose of shareholders, a trend he attributed to the vacuum at the centre of policymaking. He said investors needed to encourage an environment where technology worked alongside human capital and that society and the environment should be put at the heart of businesses.

The panel discussed how decarbonisation would lead to significant job losses and affect whole communities and towns built around traditional energy sectors.

“Don’t forget the human side,” Reynolds said. “It is not just about stranded assets, people and communities get stranded as well.”

Ng said investors needed an orderly transition to new energy sources. She said that not acting on rising physical risks would lead to reactive policies that could hurt society and returns. She said investors needed to work with policymakers to encourage the establishment of clear, long-term policies. She added that initiatives such as Canada’s Just Transition Task Force was helping address this. The plan, which includes working with people on the ground most affected by transition, is looking at how Canada can manage its resource endowment sustainably and transition away.

“Investors can work with companies to ensure they are prepared,” Ng said. “It is within our fiduciary duty to ask companies for hard plans about their future.”

The panel noted that although investors are not responsible for solving all problems, they have an important role to play in a just transition. They can engage with companies, particularly around tax and fair wages, Reynolds said. Parry said investors could also use the SDGs as a framework for action.