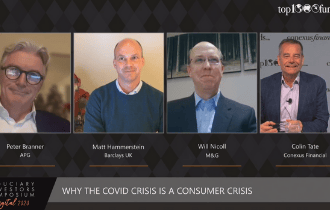 Protected by furlough schemes and mortgage holidays and saving money working from home, many consumers have come through the pandemic in better financial health than they were before. It could pose an exciting investment opportunity, say a panel of FIS 2020 Digital experts.

Investors are eyeing opportunities in the consumer sector as many people emerge from the pandemic with spending power at the ready and in better financial health than before. FIS Digital 2020 delegates heard from Matt Hammerstein, chief executive at Barclays, how UK consumers are emerging from the crisis in stronger financial positions than going into it.

He said that although some consumers have been hard hit by the pandemic, typically those on lower incomes, with young children and working in the hospitality sector, others have saved because of restrictions on their ability to spend and some have changed their financial behaviour.

“There has been an unprecedented amount of people paying off debt,” he said, adding that many of the bank’s more affluent customers are preparing to spend once the vaccine has been rolled out.

So-called consumer risk is typically held by banks, rather than investors, observed fellow panellist William Nicoll, chief investment officer, private and alternative assets at M&G Investments. But the relative financial strength of many consumers is causing him to reflect on whether investors might move into consumer risk. I wonder if consumer risk will move out of banks to investors and if investors might, for example, see returns on mortgages attractive, he asked.

“Consumers are underweight in many portfolios; consumer risk might be interesting.”

He said investors we will never compete with banks in terms of their reach and depth of consumer understanding, but he said if banks offload risk, investors might “be happy to take it.” Adding: “It is the current thing we are most interested in.”

Nicoll explained how consumers have been supported by government helicopter money, furlough schemes and mortgage holidays.

“In a normal crisis, we’d see unemployment going up, a mortgage crisis and other impacts, but there is no big housing crisis coming through as people have been protected.”

Moreover, the end of government furlough and mortgage holidays is unlikely to have a big impact on the robust health of many consumers.

Other important changes in consumer behaviour triggered by the crisis include the move away from cash, said Hammerstein.

“We are unlikely to go back to cash,” he said.

Elsewhere he also noted a move from credit card use to debit cards, and people refocusing on their surroundings, either by buying locally, or spending more on their homes.

“People are refocusing their energy and spend on supporting local businesses,” he said, noting how retailers focused on the home and hobbies have done well through the pandemic. “People are thinking differently about how they use their home,” he said, referencing “a tale of two halves” in the retail space reflected by Barclay’s own staff where around 40% of employees now work from home.

Expanding on the WFH trend, M&G’s Nicoll noted how investors in real estate will increasingly favour environmentally-friendly buildings. Old office blocs requiring full refurbishments will struggle. “We have seen accelerated moves towards the office of the future,” he said. That said, although office space has been hard hit by the pandemic, Nicoll argued that companies will still want office space. “The desire for offices and central spaces has changed but not gone away; quality will do well.”

In contrast, retail property is in difficulty he said, noting how the market is writing down the value of retail property. As for aviation, he said the desire to travel hadn’t gone away although factors around carbon emissions will impact aviation.

The pandemic has accelerated trends already underway like digitalisation, investment in efforts to counter climate change and Chinese growth, reflected fellow panellist Peter Branner, chief investment officer, APG. Referencing the fund manager’s 2019 stake in Brussels Airport, bought with Australian alternatives fund manager QIC, Branner said “flying with come back,” although he noted that with “hindsight we could have waited longer.”

Elsewhere, the recently acquired stake in a Portuguese toll road operator has also struggled to perform given people are driving less. Here he reflected “people will continue to drive; maybe not the same cars but they will drive.”

Now the fund is looking at opportunities in electrification and the grid and wind investment in France and Portugal, allocations he described as some of “the most important part of our private portfolio” seeing “the strongest price moves.”

Investors’ inability to carry out due diligence on the ground because of the travel ban is a key concern, he concluded. “It’s a big worry.” As for a decline in the popularity of city living, he said that city centres are still expensive. “City living will always be attractive so I don’t expect that to change too much,” he said.