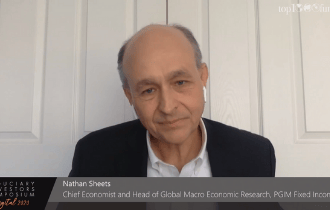 PGIM’s chief economist and head of global macroeconomic research, Nathan Sheets, outlines what Biden’s priorities will be and how his key appointees will lead their departments. He also explains why he believes inflation will remain low and that investors will increasingly move into risk assets.

Expect the Biden government to invest strategically in infrastructure, healthcare and efforts to combat climate change, said Nathan Sheets, the former Under Secretary of the Treasury for International Affairs representing the US government on international economic policy, and now chief economist at PGIM Fixed Income.

Speaking to FIS delegates, Sheets said Biden’s new appointees have years of experience and are not a team of rivals, but cautioned that a sleek administration will face headwinds getting ambitious spending plans through Congress.

One of the most experienced of Biden’s appointees is treasury secretary ex-Federal Reserve chair Janet Yellen.

Sheets said her principled independence will ensure she “leaves the Fed to pursue its policies” and said her overwhelming focus will be on steering the economy back to health after the pandemic. Here her particular focus will be on the labour market.

“The issue of getting people back to work is critical for the administration, and her experience is so useful. No-one knows the US labour market as well as she does,” he said, telling delegates to expect fresh ideas and approaches that will put the US in a strong position as the recovery takes hold.

Next he mentioned Brian Deese, former head of sustainability at Blackrock, tapped by Biden to lead the National Economic Council where he will lead the battle to counter climate change. He predicted that Deese’s “deliberate and smooth” style would be behind the scenes, rather than front of house talking to the press on policy.

Again, he flagged the challenges of getting climate policies through Congress and suggested the focus will be on executive orders and an administrative focus, alongside emphasising policies that focus on fuel efficiency.

As for Biden’s China policy, Sheets said Biden will also view China as a strategic competitor but the new administration’s methods of dealing with China will differ from Trump.

“US China policy will stay strategically tough, but the tactics will be different,” he said. While Trump’s focus was unilateral and focused on trade, Biden will work on a multilateral basis seeking allies and alliances in a negotiation process that will span opening up the Chinese economy and respecting foreign technology.

“Many of America’s concerns are shared in Japan, Australia and Europe,” he said. “Expect a tactically different approach, but there will be tensions in the US/ China relationship under Biden.”

Describing himself as in the “low inflation camp,” Sheets downplayed the likelihood of inflation spiking in the wake of the pandemic.

Drawing on his knowledge of low inflation after the GFC, a time when many people thought it would surge given the liquidity in the system, he said the same could be the case this time around. Back then structural forces in the economy like an aging demographic and automation kept inflation low, and these structural forces are still in play today.

“Automation is progressing and more so coming out of the pandemic, while high levels of debt are likely to impact demand,” he said, forecasting soft to moderate growth, low inflation and low rates in the years ahead. “It is possible during the process of getting back to normal that we see shortages and bottlenecks of higher inflation, but it will be a temporary phenomena.”

Reflecting on the impact of low rates and low inflation on asset classes, Sheets said investors would increasingly “reach for yield” in a trend that is positive for risk assets.

“Investors need to take on risk to to hit their expected return objectives,” he said, predicting investors will increasingly move into high quality stocks and out of government securities. Navigating currency risk will remain tough he said, predicting the dollar will depreciate not against the yen or Euro but against the renminbi and emerging market currencies as the global recovery takes hold.

“Currencies will be toughest asset class,” he concluded.