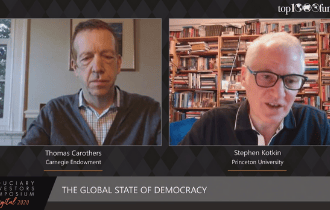 Celebrated expert and author on democracy Thomas Carothers speaks to Stephen Kotkin on the reasons why democracy is in crisis. The solutions involve meeting the needs of alienated middle classes, strengthening institutions and policies that foster equality rather than enable elite capture, he said.

The crisis in democracy is linked to three key trends that have emerged over the last 15 years said Thomas Carothers, one of America’s most celebrated experts on the topic. Speaking at FIS Digital, the Harvey V. Fineberg chair for democracy studies at the Carnegie Endowment for International Peace urged investor delegates to reflect on a few important themes rather than make the mistake of slipping into a “broad gloom” about democracy’s long-term survival.

First, he linked threats to democracy in established democracies like the US and in some European countries to troubled middle classes, a group he described as “dislocated and insecure and searching for alternatives.” Their hunt for “something different” has also been fuelled by immigration, sparking a reaction against too much change and leading people to seek to “turn the clock back.”

In another trend he explained to delegates that democracy is struggling because instead of liberalising and converging with the West, China and Russia have gone in different, surprising directions. “Two authoritarian powers are genuinely challenging the West,” he said.

However in amongst all these trends lies another that Carothers, whose work includes democracy assistance projects for many organizations alongside extensive field research on aid efforts around the world, warned delegates promises more disruption still. Citizens have rising expectations of improvements in their education and wealth, and ask more of the people governing them. However, in many cases people are unable to better their lives, leading to protest. People feel excluded and marginalised and increasingly angry about corruption, he said. “Corruption is the single biggest driver of political change.”

He also said political overreach is threatening democracy as Presidents steal elections, visible in countries like Belarus. “Protest waves are the thermostat that measures the fever,” he said. “It’s not a problem with democracy; the problem is that citizens want more, and governments are struggling to provide.”

Moreover, democracy also flounders when flawed systems choose bad leaders. Instead of elections processes being open and fair, often leaders are not representative; elsewhere leaders are constrained by law, or fail to show basic competence. He said the West has been complacent about rising angst amongst the population, and overestimated the health of institutions in striving and nascent democracies back in the 1990s. “All shiny, new democracies have weaknesses; there isn’t a mysterious crisis in democracy – these are tangible things,” he said.

Next the conversation turned to the US election. Despite the high turnout (the highest in 100 years) US democracy remains troubled because of a series of challening problems. On one hand the polarization between the US Republican and Democratic political parties is extreme. “There is very little common ground; the right is much further right than the centre right,” he said citing extreme Republican views like the elimination of taxes as difficult to square with liberalism.

US democracy is also under threat because of elite capture. The high concentration of wealth by people with a strong influence over aspects of policy is testing democracy. If you have money you can penetrate the political system, he said. This ignores the middle classes, while attempts to change the status quo are met with cries of class war. “The idea that America’s democracy is a democracy for all is not true,” he said. Finally, Carothers warned that America’s democracy is imperilled by “a very old constitution” with structural problems that allow entrenched minority interests. “Constitutional amendments are a heavy lift,” he said.

That said, solutions are to hand. He urged Biden to push ahead with “broad-based” wins for the population like healthcare, infrastructure and broadband investment. He also urged to begin fixing the electoral system by ensuring it is no longer run by bipartisan officials, requiring a new policy overseen by central guidance as well as significant investment. “Take small issues one at a time rather than a big bang approach,” he said.

However, Carothers concluded that one of the dilemmas of polarization is that it makes reform to alleviate it difficult. “Consensual systemic reform in a polarized country is difficult; big reforms are also difficult with elite capture.” As for America’s ability to preach democracy overseas, he urged a neutral and humble, “quiet and serious,” approach that wins back credit for the US overseas.