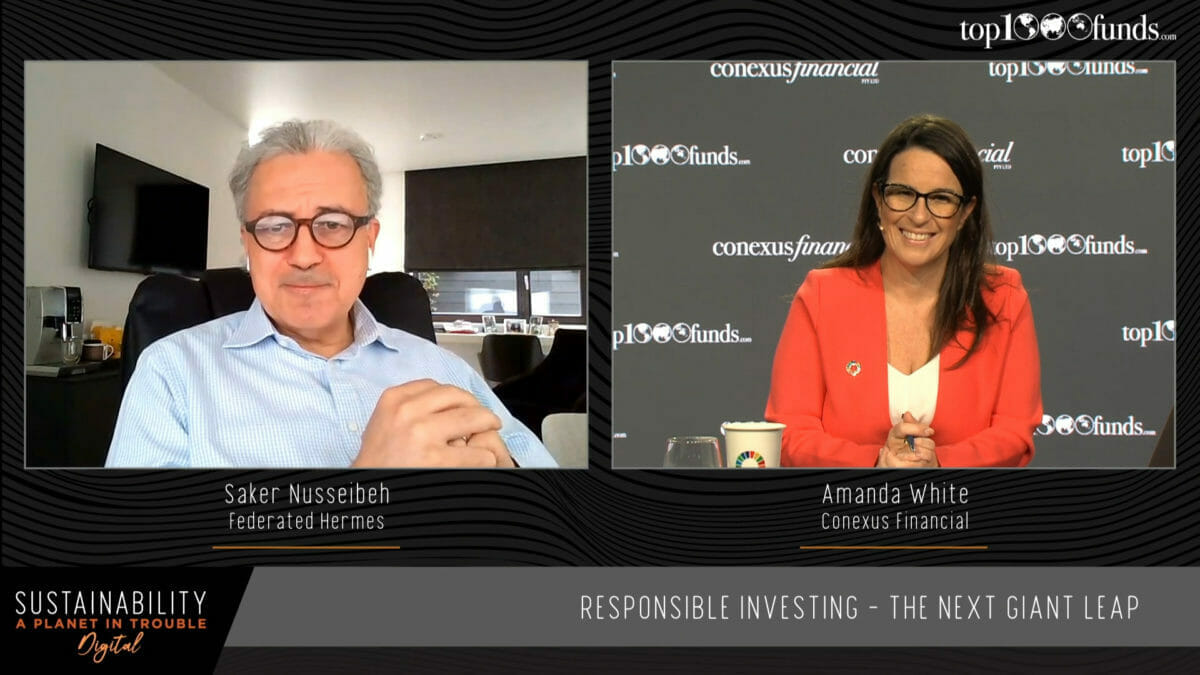 Stewardship and engagement will become an integral part of investment in the future, and asset owners need to write stewardship and non-financial objectives into their mandates with external managers, according to Saker Nusseibeh, chief executive international of Federated Hermes.

Because investment- unlike trading the financial markets – is long-term, investee companies’ actions over the long term are crucially important. Speaking at Sustainability Digital, Saker Nusseibeh, chief executive international of Federated Hermes told delegates that assets held in an index fund give investors no connection with the company over the long term. There is no conversation with the company about strategy, how they treat their workforce or mitigate black swans. Investment, by contrast, is about being a responsible owner for the long term.

He urged delegates to learn about ESG and plough resources into garnering a knowledge that goes deeper than just claiming to integrate ESG.

Regarding engagement, Nusseibeh advised working with companies on the issues that they care and worry about. Run it in a democratic way; ask them what issues concern them, he said.

“If you want to help make the company better, think about the issues we face together.”

He said that changing company behaviour involves measuring performance, including how corporates perform against peers in their sector. Over time those that meet sustainability KPIs outperform their sector substantially because they are simply enhancing their ability to make money over the long-term, he said.

“It is about doing capitalism better. Discussions about ESG and sustainability should always be about investment.”

Nusseibeh, who was awarded a Commander of the Order of the British Empire in the Queen’s 2019 New Year’s Honours list for services to Responsible Business and Finance, said few active managers outperform the benchmark but investing long term leads to outperformance.

However, investing for the long term doesn’t mean holding and then leaving. Being owners of a company involves making sure the business is sustainable and thinking about risk and how to mitigate it. For example, not integrating diversity in a business “halves supply chains” and not acting in the interests of stakeholders like the local community invites regulation.

“The companies we own shape the societies we live in, and people want to ensure that the society they retire into is sustainable,” he said.

He told delegates that this belief in stewardship will increasingly impact funds management. All investors will recognise that ownership of public or private companies involves an element of stewardship “to look after their investments over the long term.”

Stewardship and engaging with companies will become an integral part of investment, he predicted. Hermes first started engaging for stronger UK corporate governance in 1983, was a founding signatory of the PRI in 2006, and spearheaded the Climate Action 100+.

The audience, made up of asset owners from 42 countries, was in support of integrating stewardship into the investment process, with 60 per cent saying that stewardship should be mandatory in a live poll at the event.

Nusseibeh said that asset owners need to write stewardship and non-financial objectives into their mandates. You can’t just allocate to passive or active funds without a stewardship target assigned, he said.

He also urged investors to talk about long-term realistic targets that incorporate the value of integrating ESG whereby value is attributed to aspects of a business other than the financials.

For example, COVID-19 has taught people that culture is very important within a company.

“Companies with strong cultures survived COVID but how do you measure culture?” he asked. There should be outcomes that are related to behaviour. “This is the only way to invest separate from betting on the markets,” he said.

He also said that low cost, passive investment would come back to “bite” because of the wider costs incurred by society as a whole. If global warming reaches three degrees the savings investors will have made via passive allocations will be wiped out by the increased costs of water, food and energy.

“The money we save has got to be able to let us retire well,” he concluded.