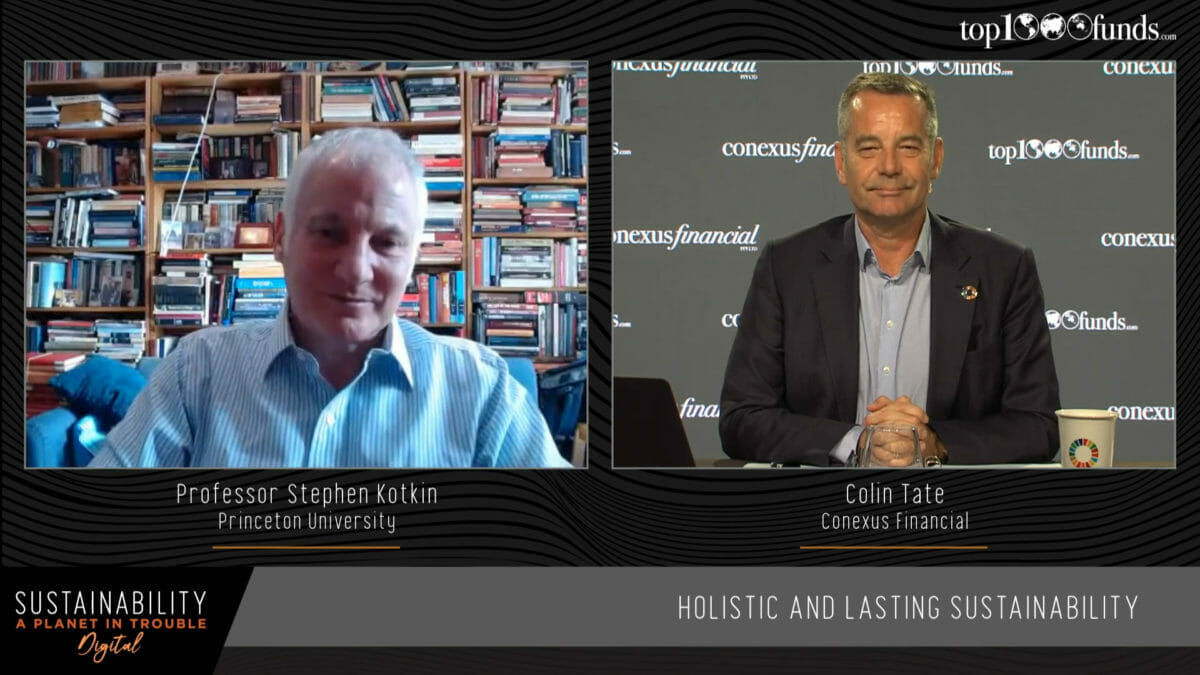 Apocalyptic portrayals of the future have failed and sustainability needs to make much more of the fact that doing the right thing also equates to better returns. Speaking at Sustainability Digital, Stephen Kotkin, Professor in History and International Affairs at Princeton University, urged delegates to make much more of ESG’s superior returns. He said shaming and virtue signalling doesn’t work.

“The data shows ESG adoption is not about being virtuous but about superior returns.”

He said that ESG needed to offer realistic solutions and build patiently from the ground up, adding that sustainable politics entails building coalitions and incentives. For example, surveys suggest people want to be green but when they are asked to make green choices, many opt not to.

Referencing William Nordhaus, Sterling Professor of Economics, Yale University speaking in an early session, Kotkin said the current approach is failing because there are no sticks.

Kotkin said that solidarity only exists on a national level, yet global integration requires global solidarity.

“People are global citizens – but only in a small way,” he said. “Governments are only accountable to their own voters.”

Although global policy is aspirational and sought after it is only apparent in two important areas: multinational business and global investment.

Citing the likes of US pension giant CalPERS or multinationals like Unilever he said they can act globally and engender global politics.

Kotkin also looked at how the pandemic was playing out in authoritarian regimes.

“The bigger the crisis, the more they can justify the lack of accountability,” he said. However, he said authoritarian regimes do not like a crisis they haven’t manufactured; a real crisis requires governance, solutions and adaptability as well as the free flow of information. Authoritarian regimes have not done as well in the pandemic, he said.  “They are great when the enemy is imagined,” he said.

Even if a global solution to the world’s biggest challenges looks impossible, he told investors that they should continue trying to solve the problem and increase ESG performance.

He said the hydrocarbon industry did not appear overnight, and similarly, finding an alternative will take time.

He also urged delegates to rely on data, drawing their attention to important data behind recent racial injustice in the US. America’s black middle class has doubled in size since the 1970s while the black upper classes have quadrupled and the number of black academics has also risen.

He said this was far from meaning “the problem is solved” but that thinking “we are back where we were” is similarly false.

“When we deal with aims and goals it needs to be based on data and not based on Twitter and TV images. This type of media plays up the violence and discrimination, making the challenge bigger than it is in reality,” he warned.

He said that science will ultimately solve the problem of nuclear waste, while the biotech industry is advancing healthcare. Elsewhere, agriculture is growing food without soil and 3D printing could potentially change patterns in global trade. Against these sweeping changes, he lamented the lack of change in the power sector.

He urged institutional investors to adapt and change and build expertise in new asset classes, “equipping themselves for the next economy.” Expertise in real estate and commodities may not be the asset classes of the future.

“How do you get the expertise you need tomorrow? For an organization this is not easy because you are talking about people,” he noted.

Kotkin said the bravest people always go first, and then others follow.

Looking ahead to the US election, he said politics should involve building a coalition in the middle rather than building from the far left or far right. This made you a minority that “can only win through manipulation.” He noted that America’s swing states would play a pivotal roll in November’s result and warned of possible chaos in the election’s aftermath.

“Our institutions are stronger than predictions and American people are more sensible than the polarisation portrays,” he concluded.

For all the conference sessions, stories and white papers visit the Sustainability content hub here.