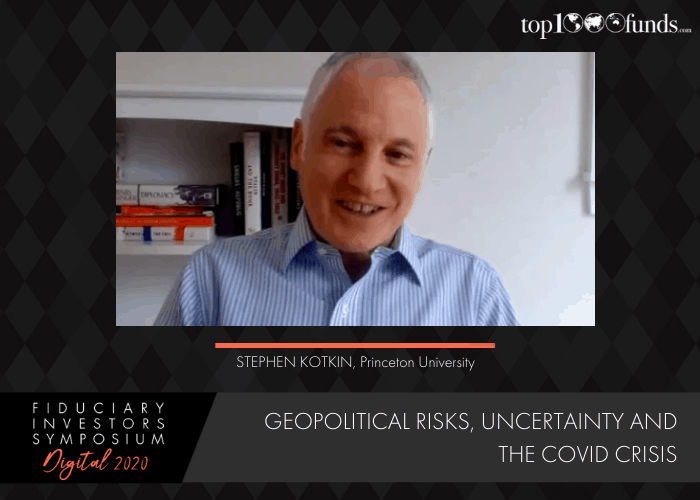 Poltical regimes around the world are stuck in a series of dead-ends and despair. Most importantly, the China-US relationship has hit a brick wall as their fundamentally different values and interests clash. Deterrents and robust policy is the only way forward, says Stephen Kotkin, professor in history and international affairs, Princeton University.

Speaking at FIS 2020 Digital, Kotkin said political Islam in the Middle East has evolved into “stagnation and despair.” With no forward momentum, it offers “no solutions” to populations in the region.

China, which has innovated with breath-taking results driven by its dynamic population, has also hit a brick wall, he said. China can’t “move forward” with political liberalisation because that heralds the demise of the communist party. History tells us that when communism tries to open-up it liquidates itself, he said.

Thirdly, the successful US-UK pro-market dynamism born in the Thatcher and Reagan years has also ground to a halt. This has stagnated into a “cul de sac” in which President Trump and Boris Johnson are symptoms, not the cause, he said.

Elsewhere the European Union, born from a response to the WW2 and “a solution in many ways,” is also stuck because fiscal union hasn’t followed monetary union in an “inherent contradiction.”

Kotkin said that progress is difficult without a resolution of these trends which have ushered in stagnation and made “muddling through” the norm. All now set against the backdrop of ballooning corporate and sovereign debt and the promise of inflation to come.

He said that China and America’s fractious relationship (an alarming trend that affects all other trends) is rooted in fundamental differences of interest and contrasting values that have caused a cold war. He said the Chinese communist regime was a “deadly combination” of arrogance and insecurity that has accelerated divisions around the world as spheres of influence develop. He said US policy was “fumbling” in response; that the differences needed to be managed first by laying down deterrents, and secondly by engaging in robust diplomacy.

Reflecting on Beijing’s “strangle” on Hong Kong, he said the west should support Hong Kong. He said policy was not agile enough. But noted “things aren’t over” because of the courage of Hong Kong’s population.

Kotkin was critical of “the grief” the incumbent US administration causes, but he said that America’s legal structures amount to “corrective mechanisms” that would “fix” the country. Whatever the outcome of the November election, he said that the US will remain stuck between nativism on the right and anti-imperialism on the left that will continue to constrict America’s ability to engage internationally.

Reflecting on President Trump’s ability to win the election he said it was too early to jump to conclusions. The Trump campaign hadn’t “unloaded” on Joe Biden which it did to such effect on Hillary Clinton and John Kerry.

“Biden will have to withstand an intense negative barrage fuelled by big money,” he said. If he can withstand this, he could win, but there is also a pathway for Trump’s re-election – as improbable as it seems. He also counselled delegates to temper their expectations on the level of change a defeat of Trump would bring.

Regarding Russia, Kotkin said it has also hit “a brick wall.” Putin’s power is eroding, although he said he wasn’t likely to be overthrown.

“Trends continue until there is an alternative; you can’t replace something with nothing.” Difficult relationships with Russia don’t compare to China and America’s mismanaged relationship.

Apart from the Gorbachev era, every communist regime that has fallen has given way to a right wing, nativist authoritarian regime. “China is moving in this direction inside the communist party,” he concluded.

To see Professor Kotkin’s answers to questions posed during the conference click here.

To listen to the podcast with Professor Kotkin on de-globalisation click here.