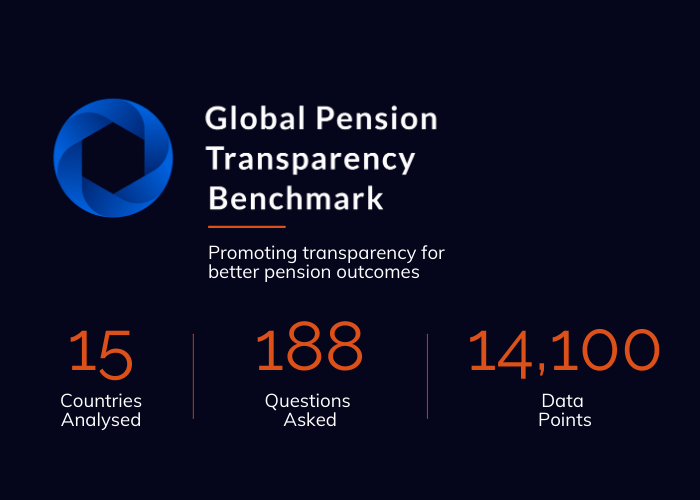 The Global Pension Transparency Benchmark, a collaboration between conexust1f.flywheelstaging.com and Toronto-based CEM Benchmarking, brings a focus to transparency of pension fund disclosures.

The GPTB ranks 15 countries on public disclosures of key value generation elements for the five largest pension fund organisations within each country. The overall country benchmark scores look at four factors: governance and organisation; performance; costs; and responsible investing; which are measured by assessing hundreds of underlying components.

Overall the transparency of disclosure varies greatly, both between countries and between funds, across all the factors that were measured. In some instances there are wild variances between the best and worst performers.

Pension funds around the world scored best on performance disclosure, followed by governance, cost and responsible investment. But only performance could be considered a decent score (average country score of 68).

While some countries and funds scored well on certain factors, on average transparency of disclosure needs improvement.

Principal at CEM Benchmarking, Mike Heale, who led the project says the benchmark has highlighted the areas where improvement is needed.

“We found quite a remarkable range for both what was disclosed and the communication quality. Individual fund total transparency scores ranged from 18 to 82. The highest scoring funds generally covered all factors well and provided many best practice examples that we have highlighted,” he says. “However, we were disappointed with the overall global results. All too often disclosures for responsible investing, costs, and governance were non-existent or minimal. Transparency builds trust. It is the right thing to do and the smart thing to do. There is much room for improvement.”

Analysis of the results showed that certain countries, and pension funds, dominated each of these four factors.

Within costs, the Netherlands was a clear leader. Within governance, the Canadians shone. When it came to performance transparency, the United States was the leader. And within sustainability, Sweden was the outlier, although all the Nordic countries performed well.

The wildest variance was in the disclosure of governance (0-97) and responsible investment (0-88).

The average country cost factor score was 51, with individual fund scores ranging from 18 to 88.

As indicated by the score range, cost factor disclosures varied considerably.  Disclosures were better when the pension fund was a single purpose entity rather than one component of a larger organisation such as a wealth management company or a governmental department.

The Netherlands stood out way ahead of the pack with the highest country score of 83, and a tight range of 71 to 88 within the funds from that country. In fact, the top four cost factor scores were held by Dutch funds. The next closest country was Canada with an average of 69.

While the Netherlands dominated, best practice in cost disclosure could be seen across other funds as well. The Royal Bank of Scotland Group was one example, as it supplements financial statement costs in its annual report and provides stakeholders with an analysis of their total investment management fees.

This factor had the largest range within countries from a low of 0 (Mexico, which did not disclose any governance materials) to 97 (Canada).

While the Canadians were clear leaders in governance transparency, there were some other very good examples of best practice including Danish fund ATP’s clear disclosure of its board competencies and skills.

Disclosures were generally comprehensive for the current year and at the total fund or investment option level.  But there was minimal or missing data for longer time periods and asset class results.  Components with the highest scores included asset mix and portfolio composition and risk policy and measures.  Components with the lowest scores were asset class returns and value added and benchmark disclosures.

Best practice examples can be seen in the US funds CalPERS and CalSTRS but also the Canadian fund, Caisse de depot et placement du Quebec.