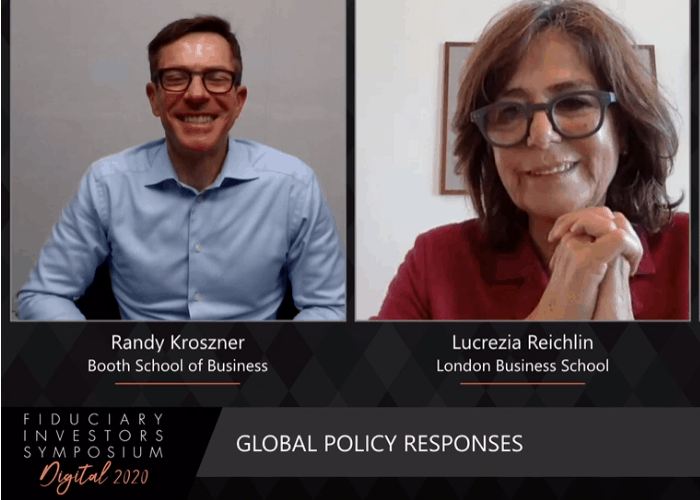 Central banks are trying to change asset prices via massive interventions, Randy Kroszner, Deputy Dean for Executive Programs and Norman R. Bobins Professor of Economics at the University of Chicago Booth School of Business told FIS 2020 delegates. In the opening panel that set out the consequences of the policy response to COVID-19, he explained that central banks actively sought to raise asset prices when markets crashed and ceased functioning in the wake of the pandemic. “It [the policy] bought things back up as planned,” he said.

Now, however, central bank’s power may be limited. The Federal Reserve cannot repair supply chains, cure the virus, or persuade people worried of catching it to venture out Kroszner, who was a former governor of the Federal Reserve, said.

That said, central bank support of asset prices has allowed companies to build up their balance sheets. The rush of corporate debt and equity issuance since February is a consequence of firms wishing to hold cash in uncertain times, creating what Kroszner called “fortress balance sheets.” It means that should another crash come, companies are well prepared. As long as companies have cash on hand, they can weather a tough recession, he said.

The crisis has provided a unifying opportunity for Europe, said Lucrezia Reichlin, Professor at London Business School and founder of Now-Casting Economics. She told delegates that Europe’s monetary and fiscal policy response has differed from 2008. She said the purchase of assets by the European Central Bank, where she used to be head of research, revealed a new level of flexibility to support weaker European economies like Italy, relaxing proportionality rules.

“This flexibility has been adopted by all members of the Governing Council,” she said. Elsewhere, she noted innovation around guaranteeing market liquidity.

Regarding fiscal policy she said governments had more room to move to put fiscal packages in place to provide liquidity to households and companies.

She also noted another “new phase” emerging in the shape of the EU recovery fund, with funds raised used to support EU spending. Reichlin told delegates that the ECB has to tread a fine line between coordination and independence. Central banks now have a broader set of tools and a larger role in the market, she said.

Kroszner said that the Federal Reserve and other central banks will have to act quickly on withdrawing stimulus if “markets are right” and a recovery is on the way.

Although he noted it will take a while to get back to where markets were before the pandemic, he said central banks will have to time withdrawing their support to avoid inflation.

“They should be able to do it. Programs are easily and quickly reversible but there is downside risk,” he said. “It may be challenging for central banks’ to pull back quickly enough.”

He added that although the Federal Reserve is forced to consider negative interest rates, it would try to avoid them.

Reichlin told delegates that she didn’t see inflation coming, although she warned it can come suddenly and that central banks should be prepared.

She said the bigger challenge was deflation, but that policy makers have the tools to keep interest rates and inflation at the right levels.

“Central banks will have the capability of acting in a timely way, but we shouldn’t be complacent,” she said, urging policy makers to use all tools to sustain the economy both in terms of market infrastructure and aggregate demand. Going forward, innovative coordination between fiscal and monetary policy will be key, she said.

Kroszner agreed that low inflation is more likely in the short and medium term since people will have less purchasing power. He said policy makers’ priority is to ensure markets continue to function, and that the better markets functioned, the easier it would be for firms to build up their balance sheets.

The second day of the Fiduciary Investors Symposium Digital 2020 will take place on June 24 starting at 2.00pm BST. To join the conversation register at www.fiduciaryinvestors.com