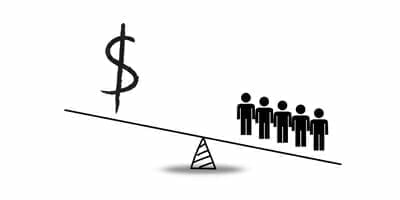 The analysis of these various cohorts reveals a large difference in the costs, with the £1 billion funds total costs at 25 basis points more than funds with £50 billion in assets.  The difference – 69 basis points versus 44 basis points – is due to a large degree to the level of internal management.

John Simmonds, principal at CEM says that the difference between the investment costs of small and large funds goes straight to the bottom line return.  He puts the cost differences down to three factors .

“The larger you get the more money you can save using internal management and by going from fund of funds to limited partnerships or even direct deal making in private markets. The reason large funds typically outperform smaller funds is cost.”

One of the implications of this is that small funds need to look at asset allocation and implementation techniques very differently to large funds.

Small funds are copying large funds, but they don’t have the resources or scale to implement at a reasonable cost.  “Don’t copy the large funds unless you are sure you can invest cost effectively,” Simmonds says.

The data shows that on average, internal management beats external management due to cost, so the natural next question is ‘when does internal management make sense’?  Many funds have been grappling with this question.  Of course there are many considerations for managing money internally, but the economic rationale is one that funds should consider closely.

CEM looked at whether there was a rule of thumb, or criteria, for a minimum size for internal management.

On average, those funds that have internal management employ one front office full time employee (FTE) for every £0.5 billion in public equity.

“We worked on the hypothesis that, getting started, you would want at least three front office FTE to mitigate some of the key-man risks,” Simmonds says.

According to CEM, the global average all in cost, including all overheads, of each full time employee is £250,000. That equates to a total budget of approximately £2.25 million to get started.

“An average cost for active external management across all public equity asset classes is around 50 bps” explains Simmonds.  At £1 billion invested in public equity that equates to fees of £5 million.  Simmonds explains that the actual ‘crossover’ point, when it makes economic sense to build an internal team is therefore around £0.5 billion for public equities.  For fixed income the minimum size is closer to £1 billion.

“Of course, the fact that it makes economic sense at that point doesn’t mean that every fund of that size should do so.  There are a host of factors that need to be considered alongside cost,” Simmonds says. “At least we now know the starting point for having the conversation.”