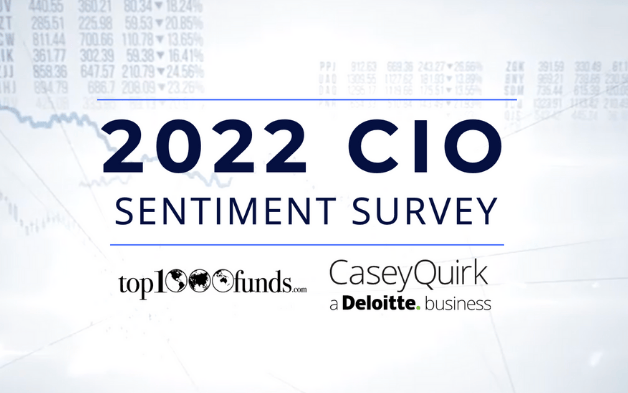 The 2022 annual CIO Sentiment Survey, a collaboration between Top1000funds.com and CaseyQuirk, part of Deloitte Consulting, finds asset owners most concerned about equity valuations and inflation. After three years of fee rises, asset owners are paying less for their investments with external fees coming down, while CIOs in 2022 are also working with a smaller manager roster than previous years.

The survey, which has been running for six years, finds global CIOs notably concerned about elevated equity valuations and inflation. Touted as temporary by most policy makers last year, inflation now looks more engrained and is driving demand for defensive allocations to assets like infrastructure and real estate. For a breakdown of the full results including graphs and analysis click here.

Investors’ risk perception is informing their planned allocation shifts, most visible in a spike in the number of funds planning “significant increases” to active fixed income in North America and EMEA.

Elsewhere, CIOs continue to de-risk and reduce equity allocations while the majority of respondents said they planned to increase allocations to alternatives, increasingly tilted toward real assets and private debt. Respondents listed the main defensive allocations in their portfolios as core fixed income (61 per cent) and real assets (30 per cent) and said they are venturing into private markets for yield and diversification. For more results click here

When it comes to sourcing new managers, most CIOs surveyed use existing relationships with providers and consultants to introduce new relationships. Introduction requests via consultants, or making direct enquiries to a new manager themselves, are the least-used route.

But asset owners using a smaller manager cohort, doesn’t mean 2022 heralds a further reduction in the number of managers. Over two thirds of survey respondents noted plans to either moderately increase” (31 per cent) or “maintain” (33.3 per cent) their manager numbers. For more results click here

Technology produced some of the most emphatic 2022 responses, highlighting asset owners driving ambition to increase technology within their organisations. In notable spikes from 2021 levels, around two-thirds of respondents cited the importance of process automation to improve staff efficiencies; 90 per cent are currently channelling technology to improve analytics tools and services; 94 per cent are investing in performance reporting and attribution tech and 97 per cent are deploying technology to manage risk. For more results click here

2021’s roaring equity markets have boosted the funded status of many pension funds and reduced their need to add incremental risk with three quarters (76 per cent) of survey respondents saying they had no plans to increase risk to achieve their return target. Elsewhere, 63 per cent of 2022 respondents said they are confident of meeting their return target compared to 51 per cent in 2020.

For a breakdown of the full results including graphs and analysis click here.