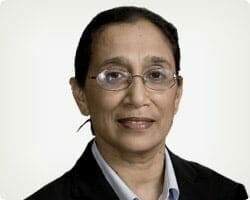 “We are now faced with an uncertain environment and it is useless to apply probabilities of outcomes,” she said. “Don’t take for granted anything in scenario planning.”

“When I look at back at my career it was much easier, we were dealing with a world where we could rely on certain structures and who the players were, we knew what monetary and fiscal policies were and what the levers were. In the last few years there has been a breakdown of that structure and relationships, everything is moving under our feet. The relative power dynamics are changing quite significantly.”

She says the increase in uncertainty, in both advanced and emerging economies, has been triggered by monetary and fiscal policies, geopolitical factors, growth prospects and trade uncertainty.

“Overall this is a very sobering picture. This is not traditional risk management,” she said.

Looking at monetary policy, Shyam-Sunder said that while the overall consensus is that quantitative easing worked in that it got the global economy back on track, it has also created a lot of uncertainty about the future including:

“The textbooks say that the Fed sets market expectations but now it looks like the Fed is reacting to the market, it is very perverse. The Fed seems to get nervous worrying about a recession. All of this is unsettling markets,” she said.

“These are new issues. There is less and less space to use fiscal policy as a tool,” she said.

The uncertainty around fiscal and monetary policy tools also coincides with increased geopolitical risks and the recent spike in trade protectionism with many countries becoming more inward looking.

“The global order of collective problem solving is breaking down and countries are tending to their own problems first,” she said.

These issues combine to paint a pretty grim picture for the global macro environment with the World Bank’s most recent estimates of global growth being revised downward, with global GDP forecasts moving from 3 per cent to 2.6 per cent for 2019, and an expectation it will remain below 3 per cent until 2021.

In perhaps a significant sign of how bad the situation is, the World Bank in assessing the impact of global uncertainty on its own balance sheet is looking at what could happen if US interest rates became negative.

Shyam-Sunder says the US banking sector has done a good job of deleveraging, but that is not true of other countries. Meanwhile government debt has increased.

“Some say this is a good time to buy debt which is true if it is being used for productive developments and the debt can be repaid,” she said. “But we’re concerned that some countries won’t be able to repay the debt.”

She estimates that around 50 per cent of lower income countries are at high risk of financial distress, and this is something the World Bank is very focussed on.

The World Bank and the IMF have a joint project on sustainable debt and use a tool called debt sustainability analysis to assess the borrowing decisions of low-income countries.

But there has been a change in the landscape here too, and with the increase of alternative sources of debt, such as private debt, the data is more difficult to capture and so there are issues of debt transparency.

She also warned about the escalation of the trade war between the US and China, demonstrating that both countries’ imports and exports had declined. The seriousness of the situation is when it hits the US consumer.

The World Bank’s assessment of the Asian region is quite low, with the forecast of Asia GDP falling below 6 per cent for first time since Asian financial.

“Overall this is a very sobering picture,” she said. “This is not traditional risk management. The way were are dealing with it is to focus on our clients and helping them weather these events and focusing on responsible lending and borrowing, and debt that is sustainable. We don’t think borrowing should be for spending but linked to specific reforms, and to helping build countries’ foundations for the future.”

She said despite the move to protectionism the World Bank will continue to focus on solving collective global problems, which is what it was set up to do.

“We’ll continue to work at what we do and try and make the world a better place.”