Institutional investors are increasingly worried about investing in businesses that exploit slave workforces through their supply chains. A roundtable into modern slavery discussed how asset owners and managers can take the lead to impact the 40.3 million workers in the world suffering from some form of labour abuse.

With modern slavery and human trafficking gaining new prominence there are questions over how best to tackle some of the worst human rights abuses.

While the onus is primarily on company supply chains, banks, asset managers and financial services also have big roles to play, according to James Cockayne, director at the Centre for Policy Research at United Nations University.

In fact, he can see the conversation on modern slavery shifting from an additive approach – which says as long as the marketplace gets the right information then market forces will fix the problem – to a more prudential approach.

“This approach would see a reliance on banks, insurers or asset managers or other non-governmental actors to shift us in the right direction,” he said.

Cockayne is the head of the secretariat for the Liechenstein Initiative for a Financial Sector Commission on Modern Slavery and Human Trafficking, which is a partnership between the governments of Liechtenstein, Australia and the Netherlands together with a consortium of banks, philanthropic foundations, and associations. 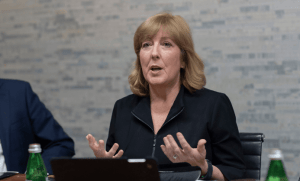 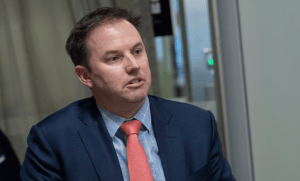 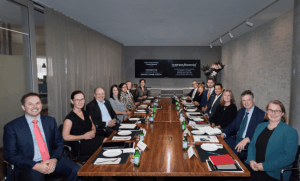 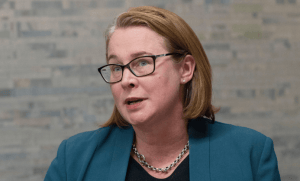 Forced slavery generates revenues of US$150 billion annually. The United Nations estimates 40.3 million people around the world are suffering some form of labour abuse – that’s one in 185 people.

What’s worse, two-thirds of those in forced labour reside in Asia Pacific. The breakneck growth in the region and migration have heightened risks of modern slavery and human trafficking.

Top1000funds.com held a roundtable with a number of the Liechenstein Initiative commissioners, as well as asset owners and banks, to discuss the role they play in moving this agenda.

Fiona Reynolds, chief executive of Principles for Responsible Investment and the chair of the Commission said there has not been enough focus on the finance sector, and leveraging the innovation in the sector for change.

“It is critical to leverage financial innovation in the fight to make vulnerable workers less vulnerable.”

Cockayne picked up this point adding that there are many people in the region who don’t have reliable access to financial services and this is a major driver of modern slavery.

“If you are poor or financially insecure in some other way, and you suffer a financial shock … maybe you had an illness. You don’t have access to reliable health insurance. Or, you experience a natural disaster that wipes out your small family farm crop,” he told the group.

“This can actually drive you into unsafe labour practices or unsafe borrowing practices. And that is a major driver of modern slavery – not only in Asia-Pacific but actually, it turns out, even in developed countries.

“So, there’s a reason to look at the access to financial services as a way of thinking about preventing modern slavery.”

On his figures, about 1.7 billion people globally don’t have access to reliable and safe financial services.

“Marrying digital innovation to this question of how do we broaden financial inclusion could be hugely beneficial for those people who might anyway be vulnerable to modern slavery and human trafficking.”

Participants heard that digital banking makes it easier to offer services to those who previously missed out because the risk to return ratio wasn’t acceptable.

There was heated discussion about the reluctance of some businesses to discuss human rights and supply chain risks even after the collapse of the Rana Plaza factory in Bangladesh five years ago, where more than 1,000 workers died.

“Bringing awareness to companies that it’s not okay. We’re in an era that Rana Plaza is not okay to happen (not that it ever was), or Thai tuna sold in Australia isn’t okay anymore,” said Alison Tate, the head of economic and social policy at the Brussels-based International Trade Union Confederation, who is also a Commissioner.

On that topic LUCRF Super CIO Leigh Gavin said the issue is “always there”.

“We don’t accept bad practices in Bangladesh apparel manufacturing but we do accept it in Australian fresh food industry. We accept it in all parts of different supply chains because we haven’t had a thousand people die in a factory here.

Meanwhile, regulations on modern slavery are tightening around the world. For example, UK now requires public reporting on corporate efforts to remove slavery or human trafficking from supply chains.

Australia’s Modern Slavery Act came into effect on January 1 this year. The first reporting cycle starts in July. The law requires large businesses to report annually on actions to address modern slavery risks in their operations.

The idea is that mandatory reporting will expose poorly-performing companies, prompting a consumer backlash. However, the Act does not slap fines on companies for failing to lodge a report.

Still, all participants at the roundtable welcomed the introduction of the Act which explicitly demands actions in line with UN guiding principles on human rights.

“That means unlike the UK, it will not be acceptable to say, “We know there’s risk, and we’re doing nothing.” Since the guidance is absolutely explicit about this,” said Cockayne.

Speaking of the Australian legislation, Mans Carlsson-Sweeny, head of ESG at Ausbil Investment Management, underlined the emphasis on legal compliance. To this end, he flagged the importance of not harassing companies that behave badly by naming and shaming them.

“There are still a lot of activists in Australia who are quite happy to write shareholder resolutions against companies.” he said. “If companies are pushed too hard, there is the risk that they will just engage in box ticking as opposed to driving real change.”

Geoff Shaw, the former Australian Ambassador for People Smuggling and Human Trafficking, said the starting point for companies is to consolidate their supply chain and source from fewer suppliers.

Aside from giving businesses more leverage over suppliers, by operating a less complex chain, companies can wring efficiencies from operations and free-up capital.

“By incentivising the tier one suppliers to monitor conditions further down – that’s half the battle won.”

Still, there are big challenges ahead for asset owners such as a heavy reliance on fund managers- some of which are laggards which needed to be shifted up the curve.

“The number of companies I speak to that say, “no one’s ever asked me about this issue or environmental issue.So, there’s a huge role as  asset owners to play to be challenging our fund managers.” said Liza McDonald head of responsible investment at First State Super.

On the data front, participants are still seeing a reluctance from businesses to provide the information that institutional investors need to be able to make informed investment decisions on what the risks are.

Worse, sometimes the wrong data is being disclosed.

The PRI’s Reynolds asked how investors could use certification more effectively. “Investors don’t have time to crunch all the data for thousands of companies, so how can certification be improved to better provide confidence and credibility,” she queried.

Anne-Maree O’Connor, head of ESG at New Zealand Super, asked how to frame the argument so companies believe these investors will accept lower returns and higher workforce costs, “because we believe that would be better for our returns over the long-term.” she said.

The disproportionate amount of time being spent on executive remuneration as opposed to ensuring living wage and proper pensions down the employee pipelines was also touched on by the roundtable.

“I think if the investors could spend more time on human rights, workers’ rights, freedom of association than on what makes a good headline executive pay, we’d get more done,” O’Connor stated.

Responsible lending came in for discussion as debt bondage is one of the most common forms of modern slavery in the world today, claiming millions of victims.

Quite aside from investments in organisations that tolerate modern slavery – lending to potential offenders – there is a question mark over the banks and their responsibilities.

For Anita Ramasastry, Professor at the University of Washington Law School, the solution is clear.

She advised the group that there is new OECD guidance on corporate sector lending and how that fits with the UN guiding principles.

“So, I think there, again, for investors to be able to really ask the financial institutions, “What are you doing to look at who you are lending to and what kind of due diligence are you engaged in?”

Participants heard that the UN has set a target to try and cut that 40 million people to close to zero by 2030 which would mean removing 9,000 people per day from the size of the affected population.

Cockayne’s best guess is we are nowhere near that number.

“So there clearly has to be a very rapid movement. And there’s going to need to be some pretty creative thinking both from financial sector and indeed from governments.”