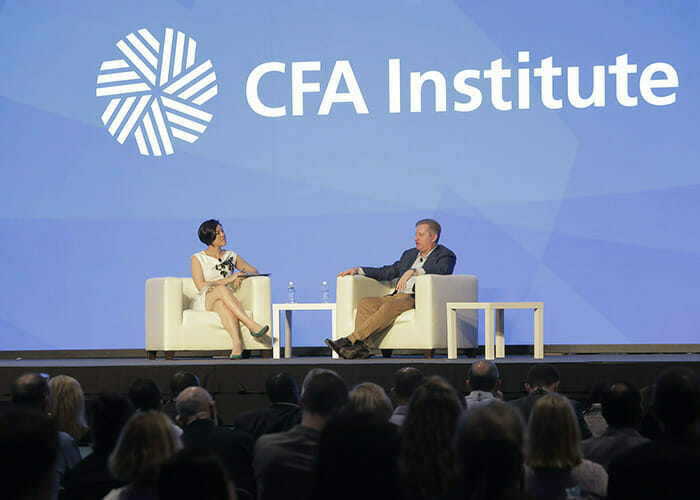 The role of securitisation is now fairly benign, and the opportunity for mischief in financial markets is small, says Steve Eisman, managing director of Neuberger Berman and one of the subjects of The Big Short.

“I see risks but I don’t see systemic risks,” he told delegates at the CFA Institute Annual Conference in Hong Kong. “Citi used to be leveraged 35 to 1, now it’s 10 to 1. The Dodd-Frank [reform legislation] has altered the landscape in the US dramatically.”

Eisman describes the financial crisis in one paragraph: there was too much leverage, the subprime asset class blew up, systemically important firms owned that asset class, and the role of derivatives skewed reality.

“The financial crisis was inevitable once subprime collapsed,” he said. “The red flags were there for years, but the gong for me was on May 8, 2006 at 7.00am, when Golden West [Financial] was sold. They were probably the best mortgage underwriters in the country, and I had a long history with them. The fact they were selling out meant, to me, the mortgage game was up.

“God could not have prevented my trade from working,” he says of his move to short subprime mortgages, which started in October 2006. “For once in my life, my timing was impeccable.”

Psychologically, it was a difficult trade. The rest of the world was on the other side, and Eisman said having the fortitude to say everyone else was wrong was difficult.

But he was angry.

“That anger held me in good stead to bet against it,” he recalled. “I thought what was going on was disgusting, from an ethical perspective.”

The structure of subprime mortgages was such that they locked in customers at a teaser rate, of say 3 per cent, that lasted for two to three years. Then the mortgage rolled over to the “real” rate, of about 9 per cent. But the customers couldn’t pay this.

“The industry underwrote the 3 per cent, and knew the customer base couldn’t pay 9 per cent,” Eisman said. “So why issue a 30-year loan when the customer can only pay the first two years and they would have to refinance and be charged for that? Wall Street was getting paid on volume, so they loved it and securitised it. Incentives trump ethics every time. Securitisation desks were all incentivised on volume not quality. Everyone in the chain was incentivised to produce as much stuff as possible.”

In the scheme of things, he said, the decision to let Lehman Brothers fail was almost biblical.

“The system had to go to the brink to get the money to bail out the industry,” he said. “Someone had to be sacrificed, unfortunately for Lehman it was them.”

Eisman said a number of systemic issues led to the crisis. For one, an entire generation of Wall Street executives “mistook leverage for genius”.

Before the crisis, he said, “the problem was Alan Greenspan”.

“He was the worst chairman of the Federal Reserve in the history of the United States; there is no one who is even close – I say that with all due respect,” he said. “Because of his ideology, he abdicated his responsibilities. He let the shadow banking industry grow with no supervision, he actually thought people on Wall Street knew what they were doing. But history [had already] taught us, and we had to learn again, that an unregulated financial system is prone to boom and bust. Banks need to be heavily regulated and don’t fool yourself otherwise.”

Now the industry is far better at managing its risk. And after the big short, Eisman said, it became much harder to extract alpha out of financials than it was before the crisis. Previously, he traded only long/short financials, but he now looks at the entire S&P 500.

“My strategy was always long/short financials,” he said. “But in a zero-rate world, it’s hard to get alpha. I went to Neuberger Berman to learn everything else. I still believe in long/short, but don’t limit it to financials.

“There are no systemic shorts at the moment. There are individual shorts, but I don’t have any ‘end-of-the-world’ shorts. I did that, I’m done,” he said. “I don’t worry about the US financial sector these days. It’s not systemic.”

He said the thing to watch the most was credit quality statistics.

“That stuff shows up in the financial system before it shows up on planet earth. But I don’t see much trouble right now.”

He describes quantitative easing 2 (QEII) as an experiment, but the problem he sees is that it gave incentives for companies to buy back stock, rather than put money back into the economy, and rates were so low that real people didn’t spend or save.

“It was monetary policy for rich people,” he argued. “How it unwinds is still very unknown. QEII has caused asset inflation, and it will be interesting to see which asset classes correct. The biggest risk at the moment is that interest rates go up too quickly.”

Eisman said there would be three rate hikes in the US this year, and three next year.

In addition to the rate at which interest rates increase, other potential risks he cited included the existence of too much high-yield debt and corporate debt.

“It’s possibly where the problems are, but it’s not a systemic problem,” he said.

Eisman also predicted that the theme of disruptors and disruptees would continue for a long time. He is bullish on info-tech stocks because of this disruption. But he is most bullish on financials, because of regulation.

“Incentivising people in any business so they do the right thing for the long term is a problem we have to solve,” he said. “The only solution for the banks is that they become more heavily regulated. I don’t think they are over-regulated at all.”

Eisman maintains 100 per cent of his wealth in a separately managed account that mimics the SMAs of his clients.