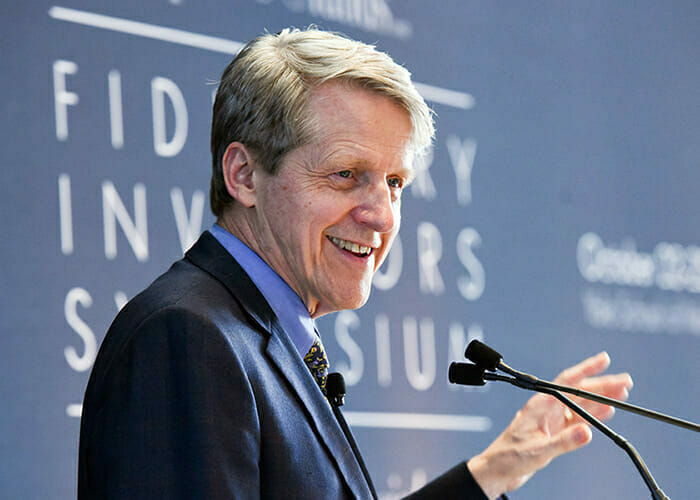 At the Fiduciary Investors Symposium at the Yale School of Management, Professor Robert Shiller reminded delegates that “finance is not just about making money”. The Sterling Professor of Economics at Yale University, Shiller warned of the tech bubble and and the housing bubble, and is the author of Irrational Exuberance. He won the 2013 Nobel Prize in Economics, alongside Eugene Fama and Lars Pete Hansen of the University of Chicago. This is an excerpt of his speech where he discusses financial innovation and the role of finance in society.

In the epilogue to my book [Finance and the Good Society] I say, finance, financial theory is a thing of beauty. When you read about a general equilibrium in financial markets where prices reflect scarcity, they sum up the demand of everybody and they put a number on it so that the scarce resource can be suitably distributed among its various uses and not squandered. And how it takes into account all of the demands and desires of people – you don’t even know them, you’ve never met them; it is a thing of beauty.

This leads some people however to worship the structure a little bit too much, because the financial theory, which I love and admire, is only a half-truth anyway. So this reminds me of your speaker from a year ago, Eugene Fama, who I think he and I agree on just about all of the facts but we differ on the interpretation. And he wants to give efficient markets a benefit of the doubt. Okay well let him do that but I doubt that markets are efficient so it’s not perfect. And there’s a bigger human element than you might imagine. So I’ve been involved with behavioural finance now for 30 years with a growing group of finance theorists.

I’m married to a psychologist as well. I think the field of neuroscience is just as revolutionary as the field of artificial intelligence because it’s changing our view of ourselves, and so we don’t fit the theoretical model of finance.

Paul Glimcher, who’s a Professor of Neural Science at New York University, wrote a book called Neuroeconomics, and he said anything that people are presumed to be doing must have a brain structure that supports it. So he wants to find out. And he says that economic theory supposes that people consistently maximise a utility function – expected utility function. That’s a pretty complicated thing to deal with. Maximise an expected utility function, subject to a budget constraint. So he says, “I want to know where in the brain that happens”. So to make a long story short, he hasn’t found it yet.

I mentioned that in my book I talk about financial professions. And I mentioned some that are not uniformly loved. But again I’m not an apologist for these people. But I also feel that they do have a position in our civil society. So let me talk, first of all, about the least loved financial profession. That’s the financial lobbyist.

In our book Phishing for Fools George [Akerlof] and I talk about lobbyists as actually having an important part of our rule making. Because congressmen are really public people that have very little time to think about policy. And lobbyists come in. They like lobbyists that are not totally dishonest; that’s why a lobbyist has to say no to some requests. He actually has a moral purpose. So maybe I didn’t convince you, but I think that there are good lobbyists. And that they are part of what makes the system work. Because the only problem with our system is if there’s an imbalance – if certain social groups have more lobbyists or more expensive lobbyists than others. But if every group has a lobbyist representing and these lobbyists have some sense of praiseworthiness as I think they do, then I think they’re a positive.

I wanted to talk about some innovations. In order to make civil society work, it’s like an engine. It has to be tuned right and managed right. And so in history there are various people with a civil society mode of thinking who propose innovations.

In Amsterdam in 1602 they set up the first stock market that really had daily trading. And they had shares held in a street name so that you didn’t have to go through all the reporting every day when shares are traded. And then the newspapers of the day, actually they weren’t newspapers yet in 1602, they were coming soon though; by the 1610s Holland had the world’s first real newspaper, so they would tell you the price of the Dutch East India Company in their newspaper. Now that is an innovation, which I think was very public spirited and it involved legal changes that allowed this to happen. But what it meant is that organisations could be valued in a marketplace, the value would be known by everybody and it provided incentives to take part in a risky venture that you couldn’t have taken part of in such a flexible way until then. It’s an interesting story because they had a short sale crisis in, I think it was 1609, and they temporarily outlawed short sales. So the invention had its problems.

Then in 1811 New York securities law was the first to really establish limited liability as a clear principle for all stock contracts, which was an adventuresome innovation. It brought us on the edge though because if you have limited liability that means you can’t put corporate executives in jail for their mistakes. And it looked like a bad idea because they thought it would lead to too many disruptive and dishonest businesses. But somehow it didn’t.

Another example is index debt; inflation index debt was first invented, as far as I can tell, in 1780 in the state of Massachusetts for a revolutionary war. And they invented a consumer price index to underlie the debt.

Other adventures are more recent. Ethical investing – I’m not sure that’s an invention. The benefit corporation is an invention of the last decade; we have non-profits and we have for-profits and it involves something slightly between that.

Another invention that I think is coming out of civil society again, which hasn’t happened yet on any scale, is GDP-linked debt – something I’ve been advocating. But I’m discovering that other people are advocating it too. It’s because it’s a risk-sharing device between countries and between investors and governments. So these are innovations that, they don’t seem to happen by the profit motive alone. They happen when there is someone in civil society advocating them.

I think that this is a particularly risky time in history. Where our risk of inequality is great because people’s sources of incomes are rapidly being challenged. But at the same time I think we’re more understanding of the role of psychology and the functioning of our institutions, and we have to think through how we can be part of civil society; how we can make financial institutions that function better with real people, but don’t get too cynical about their manipulative-ness but are also not unmindful of the deep desire people have to be praiseworthy.

We have a celebrity society, where people are admired who are not really doing much. So we’re living in a social media age where certain things go viral. So, how to engineer around that? I mentioned the benefit corporation, which is a new thing that is in the United States primarily. I don’t know what other country has it yet; it’s only a few years old. But a benefit corporation has in its charter a profit motive, but also some other stated motive like the environment or alleviating poverty or creating opportunity. But the company writes that in itself and then it becomes part of company culture hopefully.

Now, how they weigh the conflicting objectives is not defined in the law, but you just have to pay attention to both of them. But the idea that your company has a moral purpose may change their whole environment. Now, making money might be described as a moral purpose but it’s kind of tainted in some people’s eyes. There should be some other moral purpose. A lot of the states have a requirement that the company issue every year a benefit report – what they’ve done to fulfil their social or environmental goal. The question is, would you rather work for a company like that or one that was strictly for money?

To the extent that their clients allow them to, asset managers and asset owners should incorporate ESG. I would. I think in the long run, the question is, ‘how big a hit does it take on your profits?’ You might not want to invest in certain companies that are morally challenged. And I can live with that. I’d expect maybe a somewhat lower return. On the other hand I’m not even sure it will have a lower return. Because it puts you in a different space and it puts you into a different mode of thought. You attract a different kind of people in your enterprise.

The main thing that I’m working on right now, because I’m President of the American Economic Association for one year – it’s an honorary rotating thing – is my presidential address, which I have to give in January. I have a tentative title for it of narrative economics. And what I’m talking about is how social science economics, and also finance, differs from other social sciences in that we almost never use the word ‘narrative’. The people who use it the most are actually journalists. You know, you read the newspaper and they’ll say, ‘the narrative from Donald Trump is this’, or ‘the narrative about Hilary Clinton is this’. But economists don’t do that.

So what is the idea? The idea is that the human mind is very impressed by stories and they tend to be human-interest stories. And these stories inform people’s feelings and emotions. So if we’re trying to understand business fluctuations, we have to try to understand their animal spirits. And why sometimes they’re excited and willing to work very hard, and other times they’re despairing and thinking, ‘I’m out of here you know. I’m going to just try to hoard my cash and not do anything’. So what determines those things? And it is, I think, a story. What I’m looking at for my presidential address is stories behind big economic events. 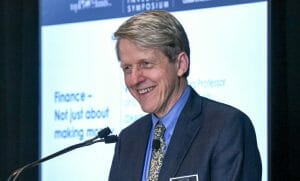 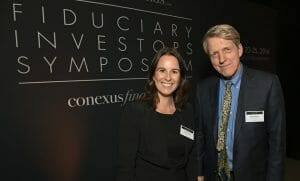 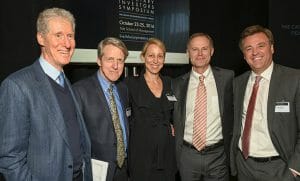 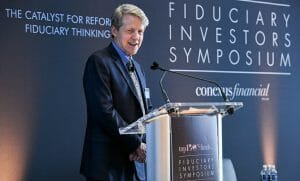 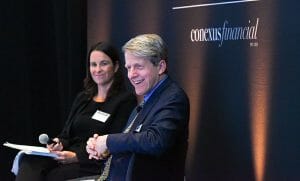 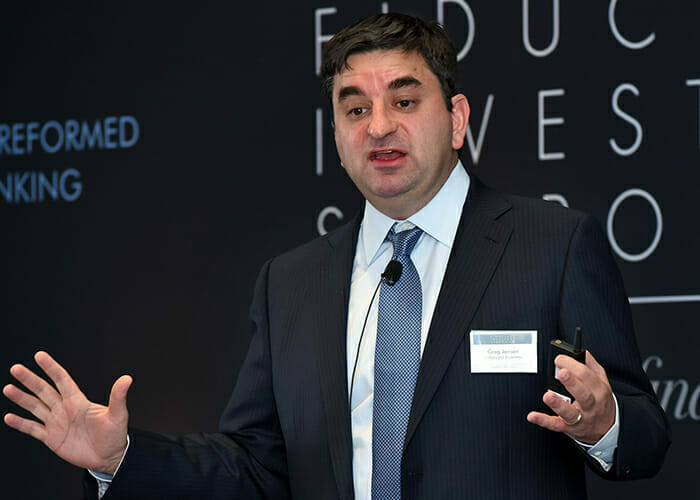 The most important thing investors can do given the investment environment is to balance their beta to account for the wide range of potential outcomes, says Greg Jensen, Bridgewater co-CIO.
Amanda WhiteNovember 9, 2016