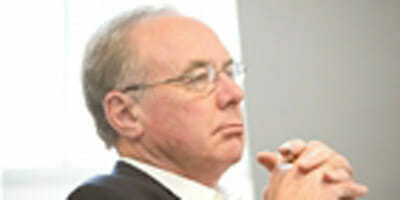 It is easy for long-term investors to avoid short termism, and the solution lies in avoiding momentum and conducting risk analysis using cash flows – not market pricing.

“Diversification is a joke. Diversification and risk analysis relies on pricing, but pricing is distorted because it’s driven by momentum,” says Paul Woolley, chairman of the Paul Woolley Centre for Dysfunctional Markets at the London School of Economics.

Woolley, whose centre has set out the not-so-small task of rewriting finance theory, says the efficient-market hypothesis rests on the premise that prices are always right, no matter whether the time frame is short or long.

But Woolley and his team, led by centre director, Dimitri Vayanos (pictured below), can show for the first time in a formal model that the long term is not equal to a succession of individual short terms.

“We’ve cracked the issue of the short term in a formal model. We can show that it is optimal to use momentum or ride the trends if your horizon is short, but if it is long term then use fundamental values and look at cash flows,” he says.

Woolley says that if markets have momentum then maybe it does pay to ride that in the short term, but investors should recognise they are forgoing long-term returns by taking that course of action.

“Anything designed to make you concerned with minimising risks and maximising returns in the short term will drive you to momentum because fundamental value investing requires patience,” he says. “It is better for long-term investors to ignore the index.”

Instead he says the benchmark for the whole fund should be real global GDP plus local inflation.

Woolley’s career has spanned academia and the private sector, but while living through the tech bubble as a partner of GMO the question around momentum played on his mind.

“The tech bubble was a big turning point for me. Everyone was acting in their own best interest, it was a disaster.”

He retired from GMO in 2006 and still had many ideas to pursue so funded and formed the centre at the London School of Economics, with affiliates in Sydney and Toulouse.

“I had spent a lot of my career exploiting the mispricing of markets, and I wanted to spend time explaining them, the causes of them, and mitigating what I thought was dysfunctional,” he says.

Since then Woolley and his team have been challenging academic theory and the strategy implications of that.

“The prevailing finance theory is why the world’s economy is such a mess,” he says.

While there has been some resistance to the challenge of looking at an alternative paradigm, particularly by academics, ironically “momentum” is growing and the centre will hold a summer school in June for PhD students in dysfunctional finance.

It has also had some intrigue with policy makers and, he says, the theory has had traction with the IMF, Bank of England and the Department of Business, Innovation and Skills in the UK government.

Perhaps one of the more significant advancements of the argument came from the G30 last month which said in its paper, Long-term finance and economic growth, that national regulators and international bodies such as the IMF and Financial Stability Board should draw up best-practice guidelines for investors with long-term liabilities or horizons.

If this is acted on, it will have “profound implications” for the investment industry and for investment returns, Woolley says, highlighting that the main obstacle is one of terminology and definition.

It is important to recognise, he says, that short-termism is not just a holding period and that long-termism does not equal buy and hold. Rather, the distinction is the investor’s choice between the two basic investment strategies of momentum trading and fundamental investing.

The problem for investors, he says, is that the damage this can cause has not been fully explained, because the theory doesn’t allow it, hence his mission to rewrite the very basis of the discussion.

“The rewriting has to come first. The prevailing theory of efficient markets is a dangerous core belief which is misleading everyone. That competition ensures prices are always right and markets are self-stabilising is not a good starting point to explain why prices are distorted,” he says.

By way of contrast, he points to the natural sciences: in physics, for example, there are assumptions of zero gravity or friction but to build machines, you assume situations when those conditions are not met.

“In finance the theory translates directly to practice and working with, for example, perfect competition, is useless and dangerous. The efficient-market theory can’t explain, for example, momentum – it’s the unexplained anomaly.”