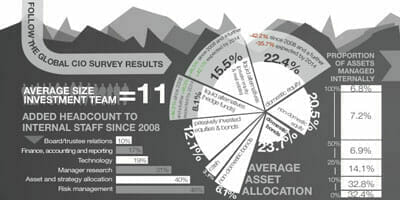 Connecticut-based financial services management consultant, Casey Quirk, and institutional investment specialist publication, top1000funds.com, joined forces in a global chief investment officer survey to measure the sentiment of asset owners, and the extent to which the 2008 crisis has had an effect on the behaviour of internal investment teams, their outlook and corresponding asset allocation. With combined assets of around $5 trillion, pension funds, sovereign wealth funds, endowments and insurance funds all participated in the survey.

Since 2008, nearly half of the respondents (45.7 per cent) had revised their investment performance targets, with a review of objectives and expectations resulting in lower target returns.

Respondents were asked about the impact the crisis had on five aspects of investing: the investment target return, investment benchmark or policy portfolio, a focus on tactical asset allocation or hedging overlays, a dedicated tail-risk allocation, and time spent on manager research.

Partner at Casey Quirk, Daniel Celeghin, says the renewed focus on dynamic asset allocation and investment policy changes is very consistent with what the consultant has seen in other research.

A related trend, also demonstrated in the survey results, he says is the revision of the target benchmark or policy portfolio. “If you’re going to be doing dynamic asset allocation then your bogey, you’re tying to it also changes. A lot of benchmarks were set many years ago when real interest rates were much higher, and you could get 5 to 6 per cent.”

Celeghin says no matter what the policy portfolio is supposed to reflect – be it expected liability, peer risk, or an output of risk tolerance and asset allocation – the benchmark is coming down. Indeed one of the most significant changes measured in the survey was the number of respondents (60 per cent) who had revised their investment benchmark or policy portfolio as a result of the 2008 financial crisis. Within that revised policy, there was a noticeable decrease in domestic equities (42.2 per cent of respondents had decreased this allocation), and an increase in illiquid alternatives (46.3 per cent) and hedge funds (38.5 per cent).

The ins and outs of management

When it came to assessing managers, the number-one attribute as ranked by the respondents was investment leadership or the people that ran the manager, this was followed by investment performance, thought leadership, market perspective, portfolio construction advice, ownership, incentives and remuneration and finally client service and support.

Two thirds of the respondents managed at least some assets in house, with 7 per cent managing 100 per cent internally. But 41 per cent of respondents said they expected the amount of assets managed in house to increase in the next two to three years.

With regard to asset allocation and portfolio construction decisions, the overwhelming majority (71.4 per cent) said they would rely more on internal staff, rather than consultants or asset managers, in the next four years. Since 2008 about 40 per cent of investors have reported spending more time on manager research, which has come in the form of more RFPs, more indepth correlation analysis, using the consultant and manager database information more comprehensively, and as part of a function of performing diligence on a broader range of strategies.

“This survey implies that asset managers globally need to evolve their offerings. Institutions will gravitate towards managers that have a clear role in helping meet their overall return objective, preferably in a fee-efficient manner. This could mean managers with expertise in dynamic asset allocation and risk management, as well as managers that have been able to consistently deliver returns that are uncorrelated to the broader public markets,” Celeghin says.