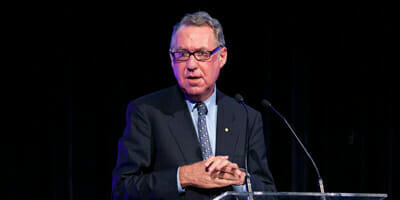 Australian’s $A73 billion ($77 billion) sovereign wealth fund has a new Government-appointed chairman and board member in a process that has become embroiled in politics.

The new chairman, David Gonski, was originally hired by the Labor government to find a replacement for outgoing chairman, David Murray, but was eventually awarded the post in a process that other board members have strongly criticised.

Gonski, 58, and new board member Steve Harker, the head of Morgan Stanley’s Australian operations, were appointed to the board for five-year terms starting on April 3.

Harker is a former national organiser for the Federated Ironworkers Union and replaces Brian Watson on the seven-member board. Watson was the global head of equity capital market and private equity at JP Morgan.

Murray has questioned the Government’s handling of the succession, noting that he was previously approached to extend his original five-year appointment by one year 12 days before it was due to expire.

Members of the board have also expressed disquiet about the appointment process, with reports the board preferred an internal candidate be appointed to head the fund.

It is rare for the Future Fund board to enter the political domain, with board members typically keeping a low profile.

As chairman Murray, however, was prepared to enter into public debate.

He stridently criticised Australian telco Telstra and also providing commentary on the Australian government’s handling of the domestic banking industry towards the end of his tenure.

Prior to the Future Fund, Murray was the chief executive of one of the nation’s “big four” banks, Commonwealth Bank of Australia.

Under Murray’s stewardship the fund has navigated difficult investment environments but has also yet to reach its long-term return government mandate of an average return of at least the Consumer Price Index (CPI) plus 4.5 to 5.5 per cent per year.

The board has interpreted this to be an average return of CPI plus 4.5 per cent per year over rolling ten-year periods.

Since the first contribution to the fund in May 2006, the Future Fund has achieved an average return of 4.2 per cent per year.

This period includes transitioning the portfolio from cash holdings to its current diversified state.

Last year the fund achieved a return of 1.9 per cent.

The Government mandate notes that the fund may not achieve its investment aims during its “transition period” as the board develops its long-term asset allocation.

Murray has made the point that the fund is required not to take excessive risk and is well positioned over the long-term to reach its investment goals.

Murray and his board also oversaw the fund investing more in hedge fund strategies.

Its alternative investments, which are predominately hedge fund allocations, now make up almost 20 per cent of the total portfolio as of December 31.

The fund is also positioned to take advantage of investment opportunities, holding almost 14 per cent of its portfolio in cash.

The appointment of Gonski will also see a shakeup on the boards of several other corporations.

He will resign from the board of the ASX Group, which runs Australia’s stock exchange, on June 30 and as a director of Singapore Airlines in July.

Gonski, a lawyer by training served as an advisor to media magnate Kerry Packer.

He has recently chaired a body that conducted a wide ranging review of Australia’s education system.