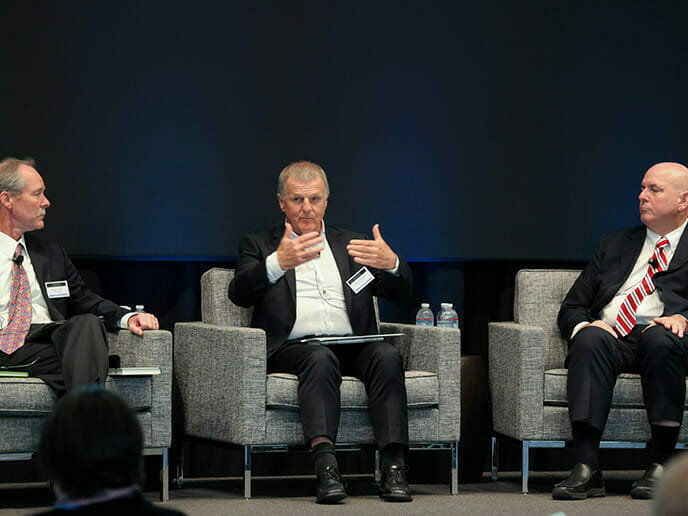 Persuading asset owners to collaborate and work together is challenging, given the inherent competition for investments and returns. Yet a group of Australian investors speaking at the Fiduciary Investors Symposium at Stanford University proved that collaboration can create economies of scale and help reap rewards such as cheaper fees and improved access to opportunities.

“It was easier to create collectivism because it was a movement from day one,” Weaven said. “We were not trying to bring existing organisations together.”

Mark Delaney, CIO of AustralianSuper, one of the largest investors with IFM, told delegates that working in a collective is not always easy.

“Everyone has an angle around ideas and portfolio construction,” Delaney said. He added that it is instinctive for different investors to “seek an edge”.

“It is not easy to invest collectively because people want credit for themselves, rather than give it to someone else,” Delaney said. Yet he called returns from AustralianSuper’s collective investments with IFM “phenomenal”, in infrastructure particularly.

Successful collaborations involve larger and more experienced investors within the group acting as leaders. Sonya Sawtell-Rickson, CIO of Australia’s HESTA, the A$43 billion ($30.5 billion) superannuation fund for health and community workers, noted the leadership role of larger investors within IFM.

“The larger funds have stood up and been stalwarts, breaking ground and sharing learnings for the benefit of others,” Sawtell-Rickson said.

Collaborations can have a real impact on fees, too, noted Kristian Fok, CIO at Australia’s Cbus Super. Negotiation in collaborative infrastructure investment has slashed fees by as much as a third, Fok said, referencing an investment outside IFM. It involved the larger investors in the group linking with the smaller ones to reach a compromise for the greater good.

“There are lots of reasons why managers can make it difficult for investors to make change, because they divide and conquer,” he explained.

Collaboration can help pension funds address issues that test their risk appetite, such as climate change. It is also a way to diversify investments, particularly for funds with home or industry biases. Different US public-sector pension funds could invest a little in each other’s states, Weaven suggested.

“It could be a win-win all around,” he said.

Cbus invests much in the building and construction sectors in support of its beneficiaries. Collaboration has been a way for it to spread its wings. Collaboration has also proved a good way to negotiate with the Australian Government, visible in AustralianSuper and IFM’s purchase of Ausgrid under a long-term lease in 2016.

“The government was comfortable because we are a broad-based collective,” Weaven said.

Yet collaboration is challenging for US public-sector pension funds, noted Chris Ailman, CIO of the $335 billion California Public Employees’ Retirement System (CalPERS). Bureaucracy and an inability to move quickly has hurt partnerships; a lack of understanding of individual investment processes and staff turnover within collaborative groups are also hindrances. Delegates heard that America’s municipal bond market remains the largest and cheapest source of capital for large infrastructure, squeezing out pension funds.

CalPERS has launched collaborative efforts but despite the interest there were “no takers”, Ailman said. He attributes this to pension fund staff being stuck in their own way of doing things; however, increased interest from foreign institutions in US infrastructure could trigger partnerships, he said.