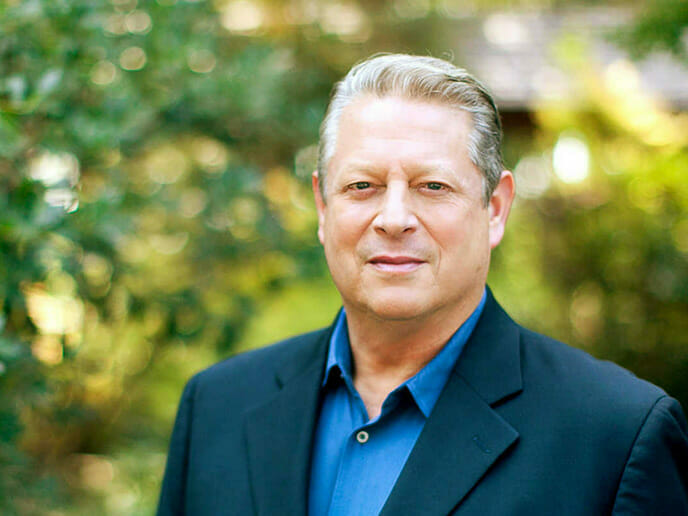 Former US vice-president and passionate environmental campaigner Al Gore argued at the PRI in Person conference in San Francisco that climate change poses an existential threat to the global economy and civilisation. In a keynote address to a hall packed with 1200 delegates, Gore, who founded Generation Investment Management in 2004, urged investors to act on climate change or they would dismally fail future generations.

Gore opened his rallying call referencing the violent storms set to pound different regions of the world. Forecast hurricanes in the south-eastern US, south-east China and Hawaii are “no coincidence”, he said. “While oceans are out of sight and mind, they are a key driving force in altering the climate on which we depend.”

He also noted a new development, wherein hurricanes are now predicted to remain in place for several days, replenishing their moisture because of new patterns in the redistribution of heat from tropics to poles.

“Wind patterns are becoming loopier and more disorganised and this doesn’t always move systems along as we have grown used to.”

Despite his dire predictions and lamenting the absence of any US political will to help solve the problem, Gore finds signs of hope. He observed that people are “joining the dots” on their own. He is also encouraged by states such as California, the world’s fifth-biggest economy, leading the way on tackling climate change with recent pledges like plans to derive all energy from renewable sources by 2045.

“The record shows California is capable of astonishing progress when it sets a course,” he said.

Initiatives in other US cities and states, and the hundreds of companies committing to using renewable energy, are also encouraging.

“The idea that the environment and the economy are in conflict is false,” Gore said. “Decarbonising goes hand in hand with improved economic performance.”

He cited the recent announcement by tech giant Apple that it will derive 100 per cent of its energy from renewable sources. He also noted that new jobs are flowing into the renewables sector faster than into traditional industries; there are five times more jobs in solar installation than in coal, he said. He also praised the role of artificial intelligence in reducing electricity usage and told investors that climate change is the “biggest investment opportunity in the history of the world”.

In line with fiduciary responsibility

Despite US President Donald Trump’s decision to take the US out of the Paris climate agreement, Gore offered hope that America might not withdraw if a new President is elected in 2020. Under the law, the first day America could withdraw from the Paris agreement is, coincidentally, the day after the next US presidential election, he said.

Gore also noted encouraging policy shifts in Europe, China and Brazil, citing the European Commission’s consideration of whether to clarify that institutional investors’ duties include considering sustainability risks. He said electricity from renewables would become increasingly cheaper and noted that as episodes of zero-cost energy increased in regions such as California, Germany and Australia, it would become easier for countries to raise their ambition and make more impressive commitments.

Gore compared the investors and companies exposed to the fossil fuels that won’t ever be extracted because of the need to limit global warming. In 2008, bankers sold mortgages to people who couldn’t afford to pay them, mitigated the risk by attaching “phony insurance”, and sold the mortgages on into market, he said.

“If fossil fuels can’t be put to use, at some point investors will recognise, as they did with subprime, that they are worthless.”

Gore ended with a message of hope that although human nature makes us vulnerable, wisdom leads us. He urged investors to identify businesses that provide goods and services that are safe for society, to take “hard steps” to begin integrating sustainability into their investment process, and to educate their teams. He told investors to engage with policymakers and companies, push corporations to disclose, and use tools like the Sustainable Development Goals (SDGs) to guide strategy.

Although investors face gaps in corporate reporting, and the policy environment is immature and skewed, he said, investors can “do their part” and work on their own, and with others, forming a community of people working in same direction.

“If we step up we can prevail,” he said.