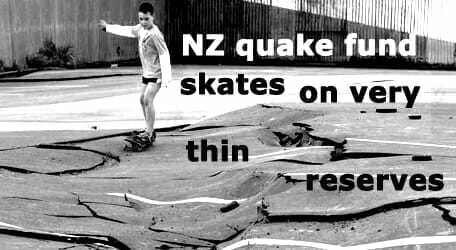 The Earthquake Commission (EQC) was already releasing about NZ$1.5 billion ($1.1 billion) of the $4.4 billion disaster fund to pay for claims generated by the 7.1 quake that caused widespread destruction in Christchurch last September.

The latest New Zealand government accounts to the end of January this year show the EQC had budgeted for insurance claims amounting to just over $1.78 billion from the September event.

While the fund itself must meet the first $1.1 billion in claims it had reinsurance in place up to a further $1.85 billion.

The EQC covers residential homeowners up to a value of $74,000 per claim. Owners who had been paid out after the September quake would be able to claim again if their homes sustained fresh damage following the latest catastrophe.

According to latest government estimates, about 10,000 Christchurch homes would have to be demolished while a further 100,000 required some level of repair as a result of the February earthquake.

If the latest round of claims exceeded $2.95 billion ($1.1 billion from the fund plus $1.85 billion from reinsurers), the EQC would have to dip into its remaining capital, which would amount to about $2.22 billion of New Zealand fixed-interest investments.

While EQC would not comment, it is understood the global equities sell-down had almost been completed. AXA’s annual accounts to the end of December last year, for example, reveal the EQC redeemed its $237.3 million global equities mandate with AllianceBernstein to cover costs incurred by the September earthquake.

The remaining 70 per cent of the EQC portfolio was chiefly invested in a range of New Zealand government securities, including about 20 per cent in inflation-linked bonds.

Russell acts as investment adviser to the EQC fund.

EQC collects about $66.6 million in levies each year but New Zealand Prime Minister, John Key, said that figure could triple next year to replenish the disaster fund.

Serafeim: ESG differentiation is an opportunity for companies to lead