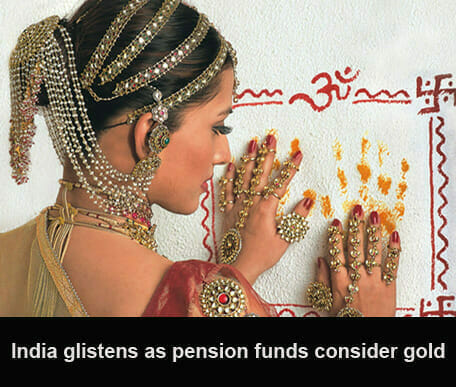 Uncertainty about whether inflation or deflation is the greater threat in the US and Europe, coupled with record prices for – and individual investor buying of – gold, have prompted an unusual level of interest in the yellow metal by pension funds.

Historically, pension funds and other institutional investors have generally shunned the gold market, for various reasons. Gold produces no income, costs money to store and is subject to supply fluctuations when governments enter the market. However, gold is a very good hedge against inflation.

Exposure to gold by pension funds in recent years has generally been through commodities funds. According to US broker Morgan Gold, a typical allocation of 3 per cent to commodities will contain about 0.15 percentage points of gold.

CalSTRS, the second-largest fund in the US, has recently followed the slightly larger CalPERS with an allocation to commodities including gold, according to Morgan Gold.

The broker says some UK funds have even shown an interest in making direct gold investments.

Gold exchange traded funds (ETFs) tracked by the World Gold Council had a record total holdings of 2,070 tonnes (worth $87 billion) at the end of September.

Gold is now in its 10th straight year of gains, sitting at the near record price of $1,415 an ounce early this week.

But demand has been falling since the global crisis started to bite in 2008 and the price rises drove people away from buying gold jewellery.

Now, according to the World Gold Council, the drop in demand has slowed and the world’s biggest buyer of gold, India, is set for a resurgence despite the record price for gold.

The council expects the current festive season in India to reverse the small decline in demand evident through the first half of this year.