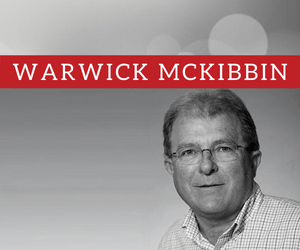 With US inflation hitting its fastest annual pace in 40 years, the “output gap” method central banks use to forecast inflation, using the difference between potential output and actual output over the projection period, appears to have broken down, says Warwick McKibbin, Professor of Public Policy and Director of the Centre for Applied Macroeconomic Analysis in the Crawford School of Public Policy at the Australian National University.

Speaking with Top1000funds.com editor Amanda White on the Fiduciary Investors Series podcast, McKibbin said more inflation is likely due to the war in Ukraine, not just from surging gas prices but also in agriculture and food, with Russia and Ukraine making up around 40 per cent of global wheat production. This would be a “very, very significant impulse to inflation,” he said.

“That itself is very bad news for the emerging world, because food is a much larger part of the budget of the poorest people on the planet,” McKibbin, who was a former decade-long board member of the Reserve Bank of Australia.

Higher inflation expectations in the US could cause a wage price spiral similar to what was seen in the 1970s, leading to ongoing interest rate hikes by the US Fed. But the Fed will “have to be very clear in how they communicate the reason for the increasing interest rate,” he said, with a lot of sensitivity in demand conditions in the US economy due to higher oil prices squeezing household budgets at the pump.

Conditions in Europe are more sensitive, he said, with Europe’s energy systems highly integrated with Russia’s. Europe faces increased uncertainty, which is “bad for investment, bad for demand,” he said.

“If Europe does stop buying gas and other assets, other fuels, from the Russian economy, that will cause a recession almost without doubt,” McKibbin said. This will put pressure on the European Central Bank to ease its ongoing tightening of monetary policy, he said.

The Fed raising interest rates could also lead to capital flight to the US from other emerging countries, he said, putting downward pressure on exchange rates, increasing import prices and driving inflation.

“My guess is you’ll see Russia probably default on their debt, the Russian economy being crushed, not by military action but by economic action, and I think you’ll find that that will propagate throughout the world as well,” McKibbin said. “So there’s a risk for increased financial crises in a number of emerging countries, and that’s a very, very delicate point in the world economy the central banks have to manage.”

Dealing with this situation will force governments to look beyond monetary policy, bringing in fiscal and climate policy as well, he said.

“I think the climate policy is a key one that’s not being used or thought about as a macroeconomic instrument, but in fact I think that’s where the potential for strong investment and productivity growth can come from,” McKibbin said.

Persistent increases in temperature could impact agricultural productivity along with labour participation and efficiency, leading more broadly to a negative impact on production and employment, McKibbin said. And this is before speaking about the increased frequency of extreme weather events.

Policy instruments like a carbon tax could drive higher costs in societies that use fossil fuels for electricity generation, leading to supply shocks such as increased cost of transportation.

Climate policy needs to be distinct and predictable with a long term trend in inflation built into the price of a carbon tax, he said, avoiding the volatility that could come from a cap and trade policy.

In terms of how Covid-19 will continue to play out, McKibbin said the pandemic is “nowhere near being over” with continuous emergence of new variants out of large populations in emerging countries who are not immunised.

“This isn’t over until the whole world is vaccinated, and that won’t be happening for quite a few years,” McKibbin said. “So we have to live with the uncertainty.”

“The key lesson is if you’re going to invest, don’t invest in dealing with the pandemic, invest in prevention,” McKibbin said. “Prevention is all about public health in poor countries, changing animal-human interactions, but also investing in public health systems.”

For more on McKibbin’s modelling on the impact of the pandemic on the world economy, see Long COVID for the global economy.