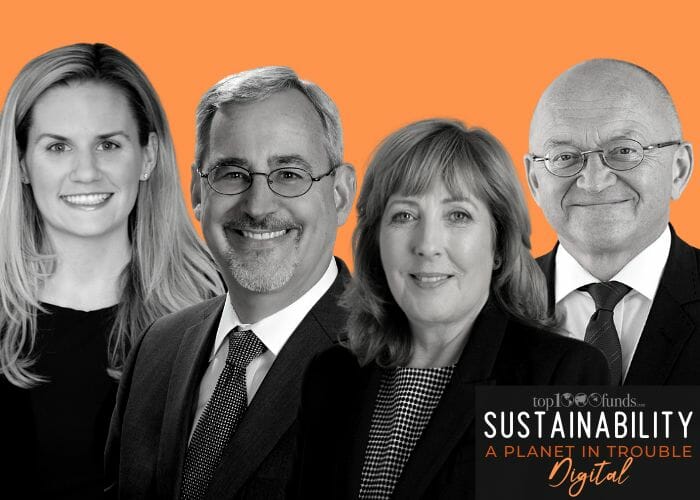 Investors from Schroders, Trillium and PensionDanmark discuss how a changing regulatory picture and the economics of sustainable investment are coming together to create a tipping point in ESG, but they warn their peers to look beyond the label to what is on the inside.

In keeping with being one of the first investors in wind energy years ago, Denmark’s PensionDanmark was also an original investor in the country’s state of the art energy island in the North Sea. Matching the energy output of 25 traditional wind farms, the island is one of two recently ratified by Parliament with the promise of transforming Europe’s energy sector.

“We are on the brink of the next step in offshore wind development,” enthused Torben Möger Pedersen, chief executive of Denmark’s PensionDanmark speaking at ‘Sustainability Digital: A Planet in Trouble.’

“I encourage colleagues in the pension fund industry to be aware,” he said, espousing the risk-adjusted returns that will come from investing in the pioneering infrastructure that connects to the grid and will see green power integrated into transport systems.

In a panel session chaired by PRI’s chief executive Fiona Reynolds, Pedersen also highlighted the investor opportunity in the EU’s giant €750 billion stimulus plan, around 30 per cent of which will go towards green endeavour. “Thirty per cent is linked to investments in the green transition and climate-related projects. Most of them will be a source of interest to private investors,” he predicted, adding that the pension fund has been involved with the EU on shaping the taxonomy that will introduce common standards on ESG and which is designed to stop green washing.

Elsewhere he said the pension fund is focused on engagement over divestment and is a proud founding partner of the Asset Owner Alliance under which it targets a carbon neutral portfolio by 2025. “Members of the Alliance have reduced their carbon footprint. If you can’t fulfil targets, you can’t be a member.”

Policy is having a mixed impact on driving sustainable investment.

Although panellists highlighted progress under the EU’s sustainable finance bill, policy in the UK is evolving in “fits and starts” according to Sarah Bratton Hughes, head of sustainability, North America at Schroders. However, she predicted initiatives will ramp up ahead of COP26. Elsewhere she noted Brazil’s plans for a taxonomy.

But it is the US where most change is afoot.

“We are not the black sheep on the team anymore,” said Bratton Hughes who is based in New York.

Department of Labor rules, introduced at the end of last year under the Trump administration, have discouraged pension plans from considering ESG issues when choosing investments. Bratton Hughes told delegates the rules had thrown a “cold shower” on ESG progress with some pension plans stalling sustainability searches although she noted “others have ploughing forward.” Now however the hope is Marty Walsh, Biden’s labor secretary, will overhaul the rules.

Fellow panellist Matt Patsky, who is chief executive of Boston-based Trillium Asset Management told delegates that getting US public sector pension funds on board with ESG would require a rewriting of the rules.

In other encouraging signs of change, Patsky told delegates that his firm is seeing a broad shift into ESG from traditional investment firms, notably on a portfolio-wide basis rather than via isolated ESG products. He said he hoped regulation would increasingly put pressure on companies to report on ESG and said more standardisation highlighting what and how companies should report on ESG is now crucial.

“This is the critical next step for real momentum,” he said. “Everyone looks at ESG data as material. This year and next we will hopefully see movement towards broad adoption and agreement on these standards.”

The conversation also centred on the importance of impact, whereby the externalities of an investment are measured and seen as material to future earnings.

“Impact is a third dimension and we need to measure and manage that risk,” said Bratton Hughes, adding Schroders integrates impact via engagement and stewardship, and providing investment products to measure the real world impact.

Meanwhile PensionDanmark is integrating the impact of its investments relative to the SDGs.

“We measure our outputs; how we are impacting healthcare provision or equality,” said Pedersen. He also said it was important pension funds explored alternative investments, and underscored the move from listed to private assets.

“As long as interest rates are kept low we see opportunities in listed stock markets, but stock markets will be challenging for the next few years. Increasing allocations to non-listed assets is our way forward.” Pedersen said.

Bratton Hughes told delegates that the economics of green power do work and is superior to legacy fossil fuels. This, combined with regulation, gives her reason to believe the world is at a tipping point. Citing MSCI’s data that tracks regulation, she said the amount of regulation is sharply increasing.

“If you looked in 2018 there were about 100 regulatory polices, that’s now doubled,” she said.

Patsky concluded with advice to investors to pay attention to what they are investing in – cautioning against chasing labels but looking carefully at what is inside.

“Be willing to be sceptical,” he advised. “Ask if this is really sustainable.”

“In order to be successful we need every owner to be active and behave as an owner. A big part of change is a realisation of the power of ownership and its opportunity.”