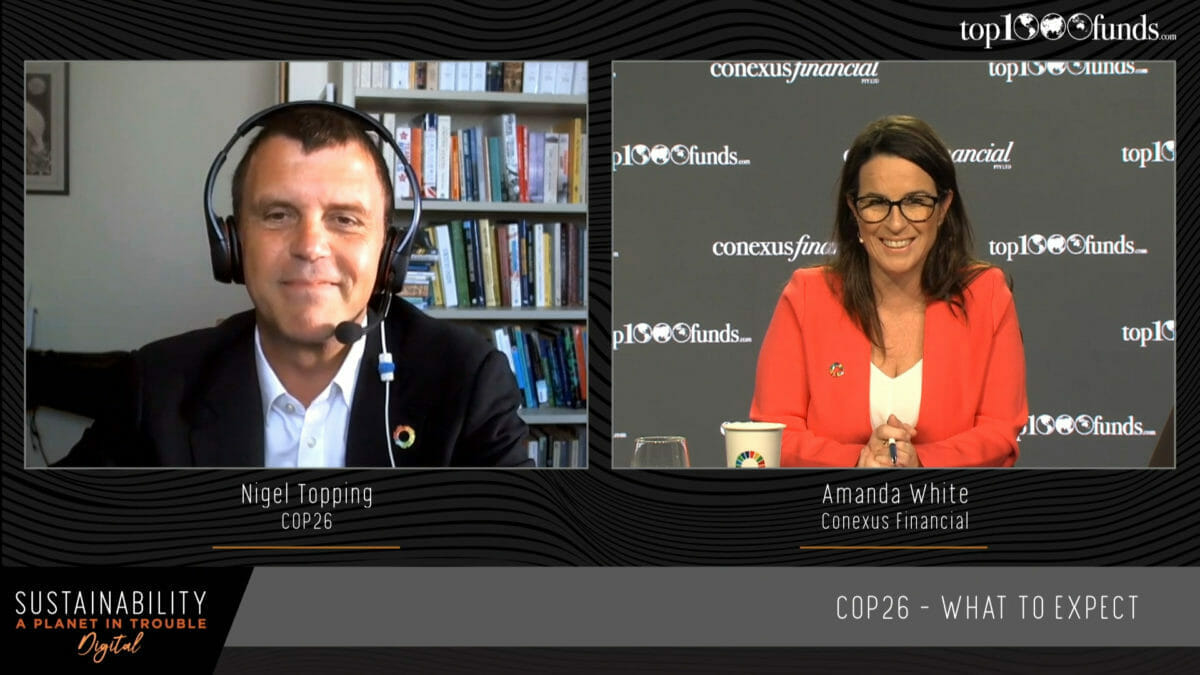 Nigel Topping, Champion of COP26, says institutional investors should  put their fund managers on notice to provide more net zero products. He was speaking at the Top1000funds.com Sustainability conference in a session detailing how asset owners can move towards net zero.

Nigel Topping, high level climate action champion for COP26, now postponed until November 2021, urged asset owners to do more to commit to net zero. Speaking at Sustainability Digital in a session that cast ahead to next year’s climate conference which also marks the fifth anniversary of the Paris Agreement, he told institutional investors to join the Net Zero Asset Owner Alliance, make their commitments public and put their managers on notice.

Topping said investors should think about how they engage with companies and reminded them that the signals they send are powerful enough “to flip” corporate thinking. He also urged asset owners to explain to companies why they are committed to net zero, detailing their moral or rational stance. In a next step, asset owners should also engage with policy makers, he said. “Asset owners are one of the most influential voices in the world.”

Long-term fiduciary owners need to put pressure on their asset managers to provide net zero products, urging managers to innovate their product range and come up with solutions. He told delegates that the investment industry is late to the sustainability story, and risks getting left behind. Many passive investments or those “tweaked” to beat benchmarks are “backward looking,” he said, also predicting that a similar net zero club will soon emerge for asset managers.

Instead of using backward measures he said investors needed to paint a picture of what the world will look like in 10 years time.

“In 10 years-time, combustion engines will look like very old technology,” he said. “No one will be buying these in 10 years-time.”

Elsewhere he noted how the falling costs across renewable energy are turning fossil fuels into legacy assets at the risk of being stranded. Similarly, food systems will look different as the world shifts from intensive meat production and its high emissions, to high quality alternative proteins free from ethical guilt or environmental costs.

Huge “sector by sector” disruption will be spurred on by citizen pressure and policy and fiscal incentives. It means that laggard corporations, neither “ahead of the curve” intellectually or in their development of new products, will find it “very difficult” to catch up as the world “flies off into the future.”

Traditional sectors already losing market share to innovation include the luxury car market. Manufacturers have lost out to Tesla, he said.

“It is a brand loyal sector; will they regain it?” he questioned. Urging investors to track the transition rather than trail it, Topping said that asset owners are already losing out by investing in sectors that are missing the transition. “How many transitions do you have to miss before you realise structurally something is wrong,” he said.

Topping also noted how rating agencies are working on the transition pathway, making it easier for investors to understand which companies are on the right path to net zero.

Elsewhere cities are greening their centres, cleaning their air and joining the race to net zero in a change he attributed to the rise of elected mayors. “Cities are a real driver of environmental change; Mayors are responsible for policy and executing it with citizens,” he said.

He added that negotiations at COP 26 will include final details outlined in the Paris Agreement around carbon markets and climate aid commitments from the developed North to the developing South. At its heart the conference will unleash much more ambition as the world moves towards net zero.

“It is not a place to renegotiate the geopolitics of energy,” he said.