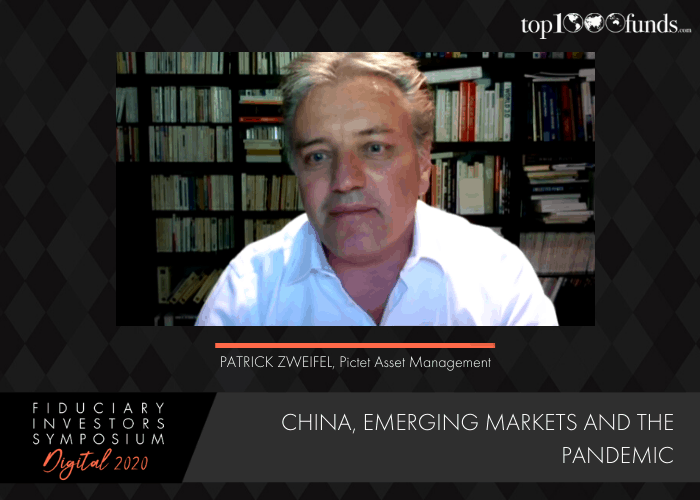 Investment opportunities in emerging markets include high yields on local government debt and cheap currencies, while China’s Renminbi has proven its resilience and is now considered a safe asset currency according to chief economist at Pictet Asset Management, Patrick Zweifel.

Contrary to the idea that COVID-19 will hit emerging economies most, many developing countries particularly in Asia and eastern Europe have successfully managed the crisis, said Patrick Zweifel, chief economist at Pictet Asset Management.

Speaking at FIS2020 Digital, Zweifel said that some emerging economies managed to source healthcare equipment and instil societal discipline around lockdowns better than the US and Europe. However, reminding investors to not view emerging markets as a single asset class, he said India and countries in Latin American are struggling with the outbreak.

Zweifel said that GDP levels in some emerging markets look more favourable than growth levels in developed countries. This is partly attributable to larger service sectors in developed countries, particularly hard hit by COVID-19. In what he called an “attractive story” for investors, emerging markets are also improving on key indicators around governance, economic diversity and improved debt levels, he said.

Other factors are also at play regarding emerging markets’ ability to outperform: a weaker US dollar, Chinese growth and a spike in commodity prices.

“Commodity prices will rise if the first two conditions are met,” he said.

As for growth in global trade which particularly impacts emerging markets, he said “the worst is behind us.” Trade data shows flows reached a low in April, but May figures show stabilisation. For example, Brazil’s exports recently got a boost from Chinese demand.

Zweifel said that emerging economies have struck an appropriate fiscal response between necessity and affordability. Highly indebted countries have mostly refrained from over-spending, he said. He noted how for the first time in history nine emerging countries have adopted quantitative easing. Meanwhile, many emerging economies will continue to attract inflows as investors search for yield. Apart from risky Italian debt, it is hard to find positive real yields in developed markets, he said.

Along with high yields, cheap currencies will also draw investors to emerging markets where he believes many currencies are undervalued.

Regarding the Renminbi, he said the currency has “been through the crisis and shown resilience” making it “a safe asset currency.” Moreover, he said the Renminbi has become more influential in Asia, supporting other Asian currencies and commodity exporting countries.

This gives China the “elasticity” to build monetary zones or a currency bloc, he said, predicting the Chinese currency will position “more internationally.”

One factor that could influence the Renminbi’s rise is other emerging countries’ perception of China. Here he believes that in contrast to developed markets, most emerging markets have a positive view of China.

“Ultimately the economic fundamentals will prevail, and it is a hard trend to stop,” he said.

Negative sentiment towards China is particularly fuelled by China’s human rights record and transparency. However, countries that benefit from an economic relationship with China are less mindful of these issues.

In contrast, countries which compete with Chinese products like South Korea have a negative view, he concluded.