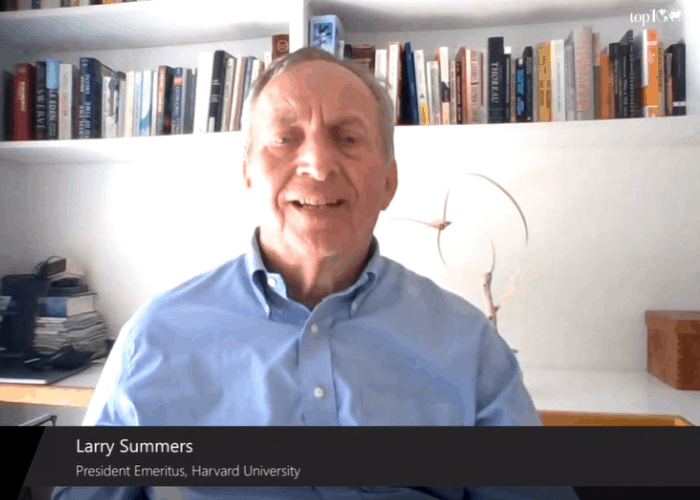 The speed and force of the policy response to the financial shock unleashed by COVID-19 has been unprecedented and welcome, however the world needs a more effective strategy in response to treating the virus itself, said Larry Summers, President Emeritus, Harvard University.

Speaking at FIS 2020 Digital the senior US Treasury Secretary for the Clinton administration, and former director of the National Economic Council for President Obama told delegates that if people don’t feel safe “going to the shops” the economic recovery will be limited no matter where interest rates are or the amount governments spend.

Summers told delegates he was “disappointed” at the absence of more pervasive testing, contact tracing and coordinated efforts to distribute a vaccine when it comes ready. He also called for more action on developing future capacity for the next pandemic, warning “this won’t be the last one.”

Reflecting on how the US is weathering the storm he said the most recent retail sales and employment figures had been better than expected. However, he said there was a high risk of a ‘W’ shaped recession where the economy rises but then falls back, or a ‘K’ shaped recovery where the rich keep getting richer, and the poor, poorer. He also flagged other risks whereby the virus gets out of control again, and people stop spending.

However, Summers said that perhaps the most “profound question” rests with the successful functioning of US democracy and America’s continued ability to “lead the world” and cooperate with other nations. He noted that the pandemic has come against the backdrop of existing challenges from crumbling infrastructure to declining life expectancy, racial injustice, inequality (particularly in health and education) and an unwillingness to support global institutions.

“Society isn’t working,” he said, adding that the US’s “polarised and ineffective” society is now on show to many countries who look to the US as an example – something he referred to as “an immense challenge.”

Summers said that whatever delegates’ view on the role of government versus the private sector, any bigger role for the US government demands a confidence and trust that is lacking in the country today. He also said that he finds it “hard to believe” that the size of the US deficit doesn’t matter.

“The amount I can spend is related to the present value of my income. Budget deficits matter and any suggestion they don’t is misguided.”

However, he flagged that viewing the budget deficit in terms of something to be “controlled” wasn’t helpful, and said the size of the budget deficit should be seen in the context of multiple factors, including low borrowing costs. Moreover, equally concerning as the budget deficit is the educational deficit, potholed roads, and the country’s lack of readiness for the climate crisis.

“I don’t subscribe to the orthodoxy that excessive borrowing is so damaging,” he said.

Reflecting on how long the current fall in output would last, Summers said that on one hand today’s challenges were deeper than after the GFC, suggesting aftershocks ahead. However, he also noted that there will be enduring productivity increases because of the technological changes COVID-19 has hastened, and our ability to be more efficient. He noted that prior to the GFC, productivity was already slowing so that the subsequent decline in output wasn’t wholly linked to the recession that followed. There will be some hysteresis, but it will be less apparent than previous times, he said.

Summers warned delegates that it would be “a mistake” to view a substantial increase in inflation as “inconceivable,” arguing inflation’s reappearance is now more likely than he thought six months ago.

“Things have a way of coming back,” he said. However, he also noted deflationary pressure, including workers fearful of losing their jobs spending less.

Elsewhere, the conversation turned to the opportunity universities face from the current disruption. He said now was the time for universities to spread their influence and magnify their impact all over the world, creating more engaging video content and increasing personal contact with students.

As for America’s ability to adapt to the challenges it faces, he said American society had proved its resilience many times in the past. People predict doom, and as they do so they set in motion changes that lead that doom not to happen, he said. “I hope our best days lie in the future.”

Summers noted that if China raises living standards in line with Taiwan, it could soon have an economy twice as large as the US. However, he noted that these types of “power transition” are not easy.

He urged for much greater cooperation between the US and China, likening the two powers to a couple in a boat, adrift on a turbulent sea and far from the shore. Both need to accommodate each other through mutual respect on areas of great importance to find a way to safety, he urged.

As for the likely outcome of November’s Presidential election, Summers argued there are three possible scenarios, each with the same chance of happening: Trump wins in a “continuity of chaos;” Biden wins, or Biden wins with “a very substantial margin” that sets the US on a new course.

In a final thought, he urged investors to cluster around infrastructure and investment that helps solve inequality, concluding that investors that integrated ESG early will benefit. Not only from the “good things” happening to such companies, but also from future investor demand.