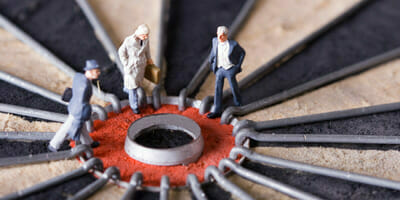 I’ve always been frustrated by interviewing consultants and the lack of conviction they have about their decisions.

“What would your ideal model portfolio look like?” I constantly ask.

“It depends on the client” is the predictable and consistent answer.

That may be valid, even true, but it speaks to a wider problem.

Consultants are hired to give advice. But most consultants don’t seem to want to put their hand on their hearts and back that advice or stand for it. Advice with conviction, which may at times include saying they got it wrong, would surely be more sought-after than peer-group or bland advice.

Consultants have been picked on in the media for the past couple of weeks, with the New York Times column Dealbook and the Financial Times article Billions of dollars wasted on investment advice both picking up on research by Oxford University’s Said Business School, Picking winners? Investment consultants’ recommendations of fund managers.

The research analysed what drives consultants’ recommendations of institutional funds, what impact these recommendations have on flows, and how much value they add to plan sponsors.

“We find that consultants’ recommendations of funds are driven largely by soft factors, rather than the funds’ past performance, and that their recommendations have a very significant effect on fund flows, but we find no evidence that these recommendations add value to plan sponsors,” the report says.

One of the key points to pick up on in this conversation, is that not only do consultants not add value, at least according to this research, but they do add cost.

Ron Bird and Jack Gray have written a lot about the agency problems in the investment industry and are due to publish a paper in Rotman International Journal of Pension Management entitled Principles, Principals and Agents.

The authors surveyed the chief executives of pension funds in Australia and subsequently non-Australian funds, with the responses revealing “the depth and complexity of the agency ecosystem in which the superannuation system is enmeshed; a system that imposes substantial costs on members’ retirement benefits”.

(Interestingly there is a footnote which explains that both authors have been and continue to be agents – consultants, investment managers and advisors.)

The paper seeks to better understand the structure, role, influence and costs of agents in superannuation and asked questions of the chief executives such as who are the agents and what do they do, how do agents justify their decisions and actions, and what are their supposed benefits to members.

While the research found that the costs of consultants (10 basis points) was small compared to other agents, it worryingly reported agents’ costs have increased much more than funds under management and have doubled relative to agents’ reported influence.

The high level of relatively negative views about agents suggests that the superannuation system is far from optimally structured in members’ best interests, the paper concludes.

In many jurisdictions, pension funds as institutions are a relatively new phenomenon. In Australia for instance, the system is only 20 years old, and it is common for agents, or outsourced partners, to be used by the funds as they “grew up”.

In fact funds have relied on consultants as they have evolved as institutions for good reason: they can’t make decisions themselves.

It is remarkable to learn how many large investors have very poor decision-making processes.

For the most part, the sophistication of the internal decision-making, governance structure and resources is not commensurate with the asset size of large institutional investors.

There are exceptions – such as the Canadian Pension Plan, the Australian Future Fund and New Zealand Super – but on the whole pension funds are not equipped to make decisions.

As funds take responsibility and ownership of this, create the functions and fill them with the resources necessary to make good decisions, the role of agents will diminish.

A review of the number and role of agents should be on the radar of all funds as they evolve into institutions.