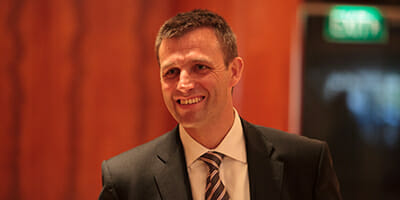 Using a fund of funds enabled the Future Fund to build a large exposure to hedge funds quickly during the global financial crisis, chief investment officer of the Future Fund, David Neal says.

The Future Fund, which uses a combination of fund of funds and direct hedge fund investments, decided it did not have the breadth of skill and research to entirely invest directly.

“Could we realistically, or want to, try to build a team with enough talent and size to cover the industry? It’s not consistent with our notion to keep the investment team small enough to sit around a table and talk about all of the opportunities and strategies to build our portfolio,” Neal says.

“We thought with fund of funds, and the extra edge of someone who’s actually doing it, was worth exploring. As we started, we found other benefits of fund of funds, for example, in the crisis we were able to move quickly. We had one investment-management agreement with one organisation, which has relationships, and we can throw money at them quickly and could build a large exposure quickly. There was an execution service that came from it that would have taken a long time.”

Neal says the Future Fund, which has almost 20 per cent exposure to hedge funds, is looking to expand its exposure and invest in commodities, catastrophe bonds and macro managers.

The fund has generated 4.9 per cent since inception, well below its mandate of consumer-price index plus 4.5 to 5.5 per cent

“We are clearly behind, but we don’t think there is much more we could have done. It is very dangerous to play catch-up. If you load up more risk, you’ll blow it,” Neal says. “You have to take the right amount of risk given the environment.”

Investors must manage the risk profile to the prevailing landscape, Neal says, but he believes there will be opportunity to take more risk in the next decade.

The Future Fund has a “dynamic” allocation process, but it is not relative to a benchmark. Rather, all investment opportunities are assessed on their merit.

“Long-term characteristics can change quickly, the GFC showed that,” he says. “It is not about active tilting but managing risk/return and adjusting accordingly.”

Because of this dynamic nature, the funds are shifted from one opportunity to another.

“There are managers we are happy with who we take money from because the opportunity changes,” Neal says.

The Future Fund considers every investment opportunity on a hedged basis, so each investment can be compared on a like-for-like basis. The fund then decides how much currency to hold.

Neal sits on the Hedge Fund Standards Board and encourages investors to sign the standards’ investor chapter.