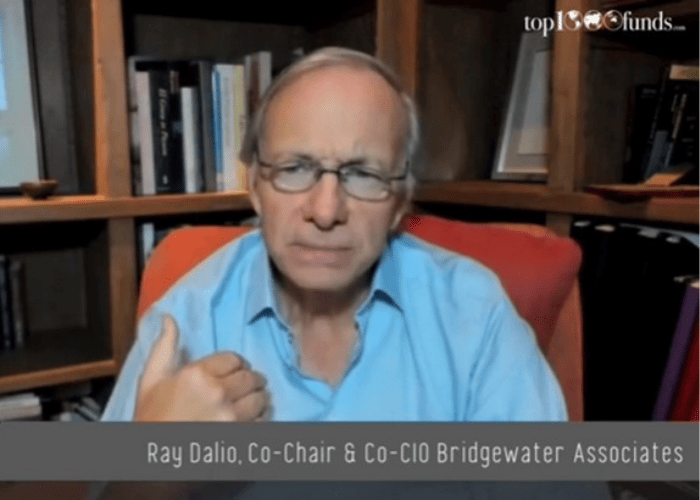 After spending an hour with Ray Dalio discussing the United States’ wonky political and capitalist system, the country’s growing wealth and prosperity gap, debt, overspending, political polarity, and of course global financial markets, monetary policy and the direction of markets, I came away reflecting on the importance of leadership and simplicity.

My interview with Dalio, co-chair and co-CIO of Bridgewater Associates, the world’s largest hedge fund, is for Top1000fund.com’s Sustainability Digital Conference to be broadcast live on Tuesday and Wednesday this week. Asset owners can reserve a complimentary pass to the broadcast here.

I pre-recorded the interview for the conference but have decided to share a few takeaways today.

This Covid pandemic has absolutely created a crease in time to reset, rethink, re-evaluate and ultimately to re-emerge. What new rules and values we re-emerge with will determine the society we live in and the world we pass on to the next generation.

The last time the world had an opportunity of this magnitude to reset and re-emerge was after the Second World War, Dalio ventured during our conversation. In 1944 a dollar-based monetary system was created and in 1945 the United States created what essentially what was a new world order or a “clean slate” to move forward from, as Dalio described.

Fast forward to today and it seems clear we are all witnessing the implosion of what began as an experiment 75 years earlier.

Capitalism is broken, according to the man with the biggest and perhaps the most sophisticated capitalist machine in the country. You can read some of the points he raises with me during our conversation in his LinkedIn post from April entitled ‘Why and how capitalism needs to be reformed’.

The system as it has played out in the United States created incredibly wide wealth and opportunity gaps, a society without a bottom – meaning there’s no safety net to account for people who fall through the cracks or for those who are most vulnerable. Possibly most distinctive is the polarisation of views and a vacuum of leadership it’s created, something the rest of the world will be watching play out in real time during the presidential election between Democratic Candidate Joe Biden and President for re-election Donald Trump.

During the conversation with Dalio I couldn’t help but wonder: if we are so clear on the problems, then why can’t we get more clear on the solutions?

We went on to talk about markets and investing – a part of the conversation you’ll have to tune into the live broadcast to catch – but it became clear to me the opportunity really is at the feet of asset owners and managers globally to engineer the kind of society we want to live in.

Dalio said he believed ‘sustainability’ was the word of the 21 Century, and I don’t think he said it just to please me or because it’s the name and the theme of the conference.

He knows as I believe many of us know that now is the time to be thoughtful, to be inclusive, to be empathetic and possibly most importantly to ditch the polarising bipartisanship and start working on solutions together to serve the common good.

For more information on the Sustainability Digital event click here.