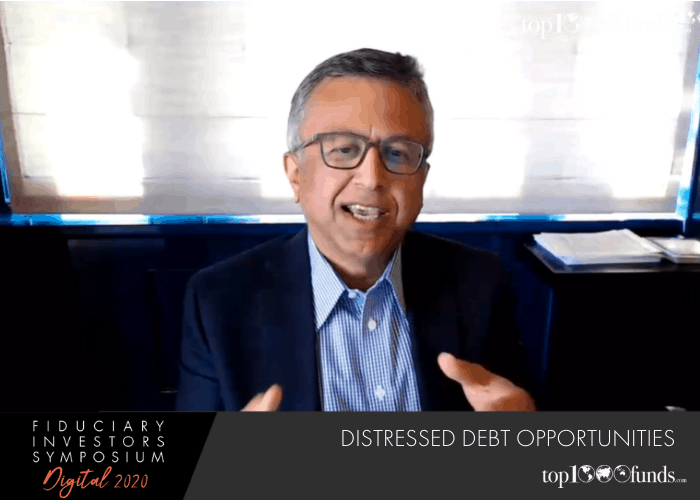 Founder of SVPGlobal, Victor Khosla tells FIS 2020 delegates that although the opportunities in distressed debt are significant, investors should pick and choose. It’s not like 2008.

The pandemic has presented once-in-a-decade opportunities for private debt investors, said Victor Khosla, founder of SVP Global. Speaking at FIS2020 Digital he cautioned, however, that the opportunities are not “once in a generation” and shouldn’t be exaggerated.

He predicts a 10 per cent default rate on high yield and leveraged loans as GDP declines across Europe, the US and emerging markets. However, unlike 2008 which was truly “extraordinary”, there has been no systemic collapse through the financial system. It means that today there is also more capital on the side-lines ready to invest.

He also cautioned that the current climate isn’t an opportunity to “go and buy the market,” rather investors should look at the difference between long-term and short-term opportunities. Forced, or distressed sellers account for one opportunity bucket, but he said this market wasn’t as deep as 2008.

The second part of the cycle will come via defaults and restructuring and companies filing for bankruptcy, but here he cautioned these can be “very low quality businesses”.

A third phase will see opportunities as restructuring and defaults occur in stronger companies that are over-levered. “We don’t focus on the first wave of restructuring in the most part,” he told delegates.

Khosla said that Europe’s recovery will be slower than the US.

“The US is very good at creative destruction,” he added, also noting that some European economies were heading into recession before the pandemic. “We believe the European trough is lower and the recovery longer,” he said.

Meanwhile he will avoid sectors like retail and “broken” airlines, businesses he described as “in the eye of the storm” and going through secular declines before the pandemic. He also cautioned that oil and gas was “already in trouble” before the pandemic, and referred to underwriting distressed debt here as “difficult”.

European economies hold further challenges for investors because of complex restructuring and bankruptcy codes. Instead, opportunity lies in industrial businesses – like a US life sciences group with senior debt maturing next year as a typical target. Khosla also avoids emerging markets where he said it was much more difficult to “have a hand on the steering wheel” to drive change in a business.

“Focus on businesses where the range of outcomes is broad; don’t go off-piste.”

Khosla told delegates how the asset class has changed over the last 20 years. It used to be a “paper business” whereby investors bought distressed debt (mostly from commercial banks) and converted the debt to equity which they then sold. There was little competition, he recalls. Although this remains the strategy for the vast majority of distressed debt investors, Khosla started on a different path 12 years ago.

His firm began to build sourcing and origination teams from which it then grew to pick-off low hanging restructuring opportunities itself. Good management teams typically leave an ailing company, opening a gap for in-house teams to go in and build a new business plan, he said.

“We are sourcing and originating the majority of what we buy; we are firmly on the steering wheel driving that business. This is how we have built a competitive advantage.”

Khosla said that given “there was much more capital today than 2008” competition has “exploded” in recent months. In contrast, in 2008 the world was short of capital and “most things people bought made money”.

He warned: “It is not that world, today.” He also cautioned that today’s crisis is a health crisis first and foremost. “If a vaccine comes to market does the opportunity disappear? This will drive the shape of the recovery.”

He concluded with advice to plan for a slow recovery with second waves of the virus stalling progress. He also suggested financing purchases with senior debt that offers a price cushion, helping to manage risk and a slower recovery.

“In distressed debt you don’t have to go to junior junk bonds; stay focused on senior secured debt.”