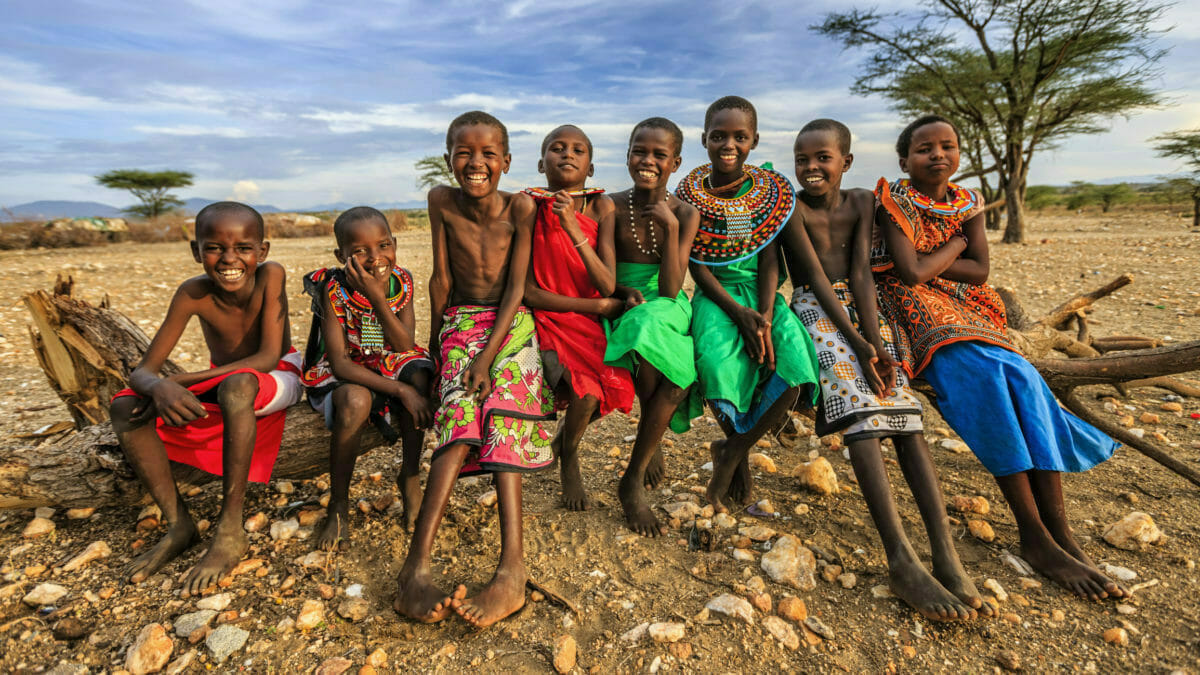 Group of happy African children from Samburu tribe, Kenya, Africa. Samburu tribe is north-central Kenya, and they are related to the Maasai.

When investors hear about opportunities in Africa, their initial reaction may be to dismiss them as too risky. Stories of political upheaval, natural disasters, famine and corruption often populate international news headlines about the continent.
Beyond the headlines, however, lie stories of innovation, improving governance and unprecedented growth in many of the 54 diverse countries that make up Africa. The time is ripe for Organisation for Economic Co-operation and Development (OECD) investors to begin exploring potential opportunities on the continent.

The investment opportunity
Mobilizing Institutional Investors to Develop Africa’s Infrastructure (MiDA), a partnership between the United States Agency for International Development (USAID) and the National Association of Securities Professionals, commissioned Mercer to develop a report, for which seven OECD asset owners were interviewed about their perceptions of the risks and opportunities in African infrastructure, along with four asset managers who are investing in infrastructure on the continent. The findings were surprising in a number of cases and support the argument that investors should learn more about related opportunities.

Low default rates…
A Moody’s report on global project finance default rates found that African projects defaulted at a rate of 5.3 per cent between 1990 and 2016, less than half the default rate in Latin America, which exceeded 12 per cent, and far lower than in Asia, where defaults occurred 8 per cent of the time. In fact, the average across all global regions was 5.4 per cent, meaning African projects were statistically less likely to default than the average global project. Only Western Europe and the Middle East had a lower default rate.
A paucity of data and Africa’s relatively low number of projects overall may indicate that only highly structured and risk-mitigated projects are seeking financing there in the first place; this would be a reflection of the key role development finance institutions (DFIs) and some private infrastructure investors continue to play in the region by helping local governments develop enabling policy frameworks and investable project pipelines

Paired with strong credit spreads
Investec Asset Management interviewed industry experts across global regions to assess potential credit spreads and found there is, indeed, a premium in Africa. For example, senior project finance debt in Africa (with a spread between 400 and 600 basis points) was priced in line with OECD market mezzanine debt (about 550-600 bps). African subordinated project finance debt ranged between 600 and 1000 bps, in spite of the low default rate Moody’s identified.

Research by South Africa-based asset management firm African Infrastructure Investment Managers shows that investments made in African infrastructure projects from construction through maturity (i.e., greenfield) are able to target dollar returns on the order of 20 per cent. Investments made once projects are operating (i.e., brownfield) offer dollar returns in the low-to-mid teens. It seems clear that with appropriately structured deals and adequate due diligence, investors can achieve strong risk-adjusted returns.

The impact imperative
The United Nations adopted the Sustainable Development Goals (SDGs) in 2015, which collectively seek to eradicate all forms of poverty by 2030. The SDGs commit all signatories to achieving sustainable development across economic, social and environmental dimensions; therefore, they are quite comprehensive in scope. Meeting them will be a global challenge requiring public, private and civil sector co-ordination. This is particularly true in southern Africa which, as a region, ranks lowest or near the bottom on most SDG indicators.

Using data from the G20’s Global Infrastructure Hub (GI Hub) database, we were able to quantify the infrastructure investment gap between current trends and what would be needed to achieve the SDGs for universal water, sanitation and electricity access. Through 2040, GI Hub figures indicated that $18 trillion above current baseline global investment figures would be needed to achieve the SDGs – or more than $700 billion a year. For the African continent, the gap was $3.3 trillion through 2040, or more than $132 billion a year. As public-sector spending on infrastructure has largely stalled since the GFC, and is unlikely to meaningfully increase, private-sector infrastructure investment will be essential for closing this investment gap.

Historically, private investment in African infrastructure has fallen far short of meeting needs in developing and frontier markets. Since 1995, private investment in core power and transportation infrastructure in Brazil and Turkey exceeded $300 billion and $115 billion, respectively. Compare that with $51 billion across the entire African continent over the last 25 years. Both the Brazilian and Turkish governments implemented legal and regulatory reforms reducing uncertainty and enhancing transparency for investors, to facilitate public-private partnerships. This shows what is possible for other emerging and frontier markets with appropriate political and institutional support.

Infrastructure investment demands in Africa can best be met via direct project debt or equity stakes in greenfield, private markets opportunities, given the historical underinvestment in the continent and its fewer mature capital market structures overall. Such opportunities present unique risks and also may not fit neatly into an investor’s asset allocation structure. Most asset owners treat infrastructure as an inflation hedge prized for its stable yield profile – for example, revenue-generating brownfield assets – but African infrastructure tends to have a risk/return profile more aligned with growth-oriented opportunistic allocations, which typically make up small portions of asset owners’ infrastructure portfolios.

Recognising these challenges for institutional investors, DFIs such as the World Bank Group, African Development Bank and others offer risk-mitigation tools at both the project and fund levels. These include political risk insurance, guarantees, foreign exchange hedges and other instruments. The DFIs will also frequently offer long-term project financing to complement greenfield equity investors. Such blending of public and private capital can make otherwise unpalatable projects investable or enhance long-term, risk-adjusted returns. In addition, a number of Africa’s 54 countries have been actively developing the regulatory and legal frameworks necessary to facilitate increased private investment in infrastructure. South Africa’s Renewable Energy Independent Power Producer Programme (REIPP programme) stands as an example of an effective market intervention to advance the development of renewable energy projects in a country.

What can interested investors do to gain further exposure to – and comfort with – the risks and opportunities African infrastructure presents? Mercer’s report offers ideas for consideration and a few key recommendations for asset owners to investigate follow:

Collaborative investing: ‘Club’ deals are used successfully by Danish asset owners. They establish syndication protocols in which one investor leads underwriting of a fund or co-investment for a group of typically smaller investors, which make voluntary investments of their own. Such an approach can streamline due diligence and lower costs that one institution would otherwise have to bear alone.

Engaging local investors: One American asset owner Mercer interviewed indicated that the best form of risk mitigation was co-investing alongside a local institution, due to the inherent alignment of interests with local governments and stakeholders this afforded. Organisations such as MiDA aim to facilitate such interconnections among investors.

DFI investment partnerships: DFIs have great expertise at investing in Africa and other emerging and frontier markets. They can partner with private investors in a number of ways: as the anchor limited partner in a fund, as the GP for a fund or as the lead in a project co-investment platform. DFIs are often seen as ‘honest brokers’ driven to advance development impacts first and foremost, rather than to realise commercial gains, and often have other outstanding financial arrangements with countries; thus they can influence local stakeholders to protect investors’ interests in case of disputes.

While investing in Africa is not a decision to be taken lightly nor one investors can simply jump into without adequate research and due diligence, Mercer believes the positive development effects and potential risk-adjusted returns present compelling reasons for investors to devote resources to investigating opportunities on the African continent.