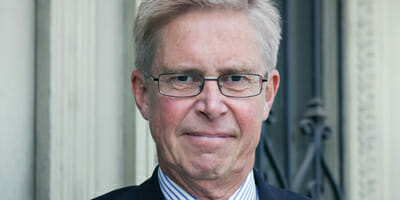 A strong belief in active management, trust in the skills and capabilities of its team, and a low-cost commercial approach has resulted in the Swedish AP4 producing its best ever performance – 16.4 per cent after expenses in 2013. Amanda White spoke to chief executive, Mats Andersson.

It’s a neat story for the SEK260 billion ($39 billion) fourth Swedish buffer fund. It’s beaten the board’s real return requirement of 4.5 per cent annually by 1.4 per cent over 10 years. Its active management approach has outperformed the benchmark index and its management expense ratio remains extremely low at 11 basis points including commission.

Chief executive of AP4 Mats Andersson has been at the helm since 2006 and has gradually reorganised and restructured the fund to be based on the core values of being professional, respectful and transparent.

“If we can live these core values and we can trust our people there is a potential to delegate and by delegating then we can be more efficient,” Andersson says.

At the cornerstone of the fund’s approach is the fact it’s a long-term investor and can withstand volatility; it advocates transparency in every investment, and if there is a choice between simple and complex investments, then simplicity is prioritised; it emphasises low cost; and has a commercial approach.

In the past five years AP4 has been one of the best performing pension funds globally, and much of that is due to its focus on the allocation process.

It allocates capital based on three time horizons – long-term (40 years), medium-term (3–5 years), and short-term (6–12 months) – with increased emphasis on the medium-term horizon.

Andersson says to meet the long term return target of 4.5 per cent real, the asset allocation needs to have a higher allocation to risky assets, which the fund interprets as 65 per cent equities and 35 per cent fixed income.

“If we have a long-term approach and measure this return over 20 years we will capture the risk premium,” he says.

This has worked, with much of the recent return attributed to a high proportion of listed equities.

“We believe in the long term there is an equity risk premium. We strongly believe there are only two assets, government bonds and equities, and the rest is a blending,” he says.

At the tactical level – in Swedish equities, global equities and global macro – the fund has had 11, six-month periods of active results, realising 50 basis points per annum above the benchmark.

The third level of allocating assets is called strategic mandates, and looks beyond the three to five year horizon.

“We try to be a long term investor and the fund invests where you need a long-term approach. For example you can’t measure private equity in three years,” he says.

AP4 also has huge position in small caps, and invests in sustainability and engagement mandates such as in low carbon, all of which measure in greater than three year periods. More like 10 years, Andersson says, adding the fund has about $10 billion invested in these strategic mandates.

“If we can do this then over time we can add 75-100 basis points. Over the past three years we’ve exceeded our targets.”

Generally the fund will back listed equities, over private equity where it only has about 1 per cent invested.

“We believe in listed equities and active management, we’re not too keen on private equity and infrastructure,” Andersson says. “We have gone our own way and will continue to do so, but not as an objective in itself.”

“Many funds have been forced to reduce risk, we are strong believers in liquid assets and we can bare volatility. Risk comes from different sources. Funds managers looking for uncorrelated and low volatility investments is just a way to play a charade.

“Everyone was so scared after 2008/09 and 2011 and were forced to sell equities and liquid assets but we think that was done at the wrong time. We can withstand volatility, and think it’s not a good measure of risk.”

About 80 per cent of AP4’s assets are managed inhouse, and by law it has to have 10 per cent managed externally.

The fund has a large home bias, about a third of its equities exposure is in Swedish equities compared to the MSCI of around 1 per cent. Andersson says historically over the past 20 years Swedish equities have outperformed the rest of the world, which is attributed to a unique governance approach whereby asset owners sit on a nomination committee which decides who’s on the board.

“Owners are accountable for the companies in Sweden,” he says. “In the US management hijacks the companies. Governance in many other places is management driven, not owner driven.”

While there is currently a review by the Swedish government to merge the AP funds from seven into five, Andersson says it is not clear what the strategy will be.

He does say the AP funds have been top quartile performers at lowest quartile cost, and it would be a challenging process to close a fund and restructure the assets. But for now, it’s business as usual.