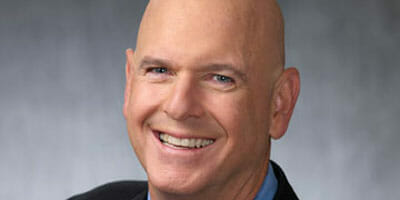 The $308.6 billion CalSTRS has outperformed its custom benchmark in every asset class to deliver a historic fund performance of 27.2 per cent for the year against a return assumption of 7 per cent.

Global equities, which makes up the bulk of the asset allocation at nearly 50 per cent, returned 41.8 per cent for the year.

But the standout performers against their benchmarks were private equity, real estate and innovative strategies returning 51.9 per cent, 7.4 per cent and 11.7 per cent respectively. The outperformance over the benchmark for these asset classes ranged from 4.1 – 6.1 per cent for the year.

The fund’s chief investment officer, Chris Ailman, says the returns were outstanding but what is more pleasing is that every asset class outperformed.

“Our returns are astonishing and we knew that would be the case because of the government stimulus, and in the US fiscal and monetary stimulus has been off the charts,” he says. “I’m astonished at our results because every asset class outperformed. We haven’t had that happen for years, I’m sure it’s been decades.”

CalSTRS currently has a 12 per cent allocation to private equity, against a target of 10 per cent, and the asset class was a stellar performer with 51.9 per cent for the year.

The fund has hundreds of relationships in private equity with vintage years going back to 1999, but Ailman gives full credit to the team for this year’s performance.

“We had some really smart co-invesmtents that later on in the pandemic became unicorn investments,” he says.

CalSTRS has an investment bucket called “innovative strategies” that was created after 2008 to push for innovation and study new, interesting areas. It currently includes aircraft leasing, private credit and other kinds of debt. It makes up only a very small portion of the portfolio, currently 0.5 per cent.

One of the success stories of the testing laboratory is the risk mitigating strategies portfolio which has grown to 10 per cent of the overall portfolio and $30 billion in assets. 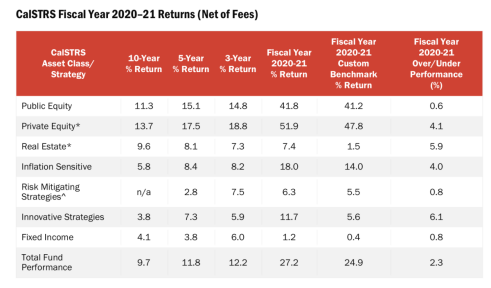 “The goal for that team is to add value and diversify. And the question is not whether you can get a one-year return but can you scale it to our size and do it over multiple time periods?” he says. “We are always looking for something new and different, we studied tail hedges a lot but still not decided to use them.”

Ailman says the risk mitigating portfolio looks at how to hedge for differences in downturns. To deal with different phases of a downturn shock the portfolio includes 30-year US government bonds, global macro, CTAs, and momentum portfolios which are diversified between three-week momentum and three-month momentum strategies.

“Bear markets don’t come wrapped in the same package,” Ailman says. “From February 2020 to March 2020 we had a bear market lasting 20 days and was down 15 per cent so fast nothing could react. Our RMS portfolio did well. The question is what is the cost of the insurance? In our case RMS had a positive return so it justifies the cost of the portfolio.”

The fund’s giant equities allocation, half of which is managed inhouse using passive and enhanced indexed strategies, was a big contributor to the annual return.

“We captured everything global equities was giving,” Ailman says. “And with our internal team we are capturing the beta of the market at a very low cost.”

Ailman says he expects the returns of his global peers will vary widely due to asset allocation differences.

“We will see wide dispersions. Even within the US there is a full 10 per cent dispersion in returns because it comes back to the equities and fixed income weightings,” he says.

CalSTRS has been reducing its fixed income allocation for 30 years, and when Ailman arrived at the fund as CIO 20 years ago it had a 40 per cent allocation.

Ailman says the fact all teams were working in isolation in remote environments in the past year is testament to the culture of the team.

“This is a year where culture and team helps separate people, if you’re working remotely and don’t have a team culture then it’s even worse,” he says.

Looking forward Ailman says he is more cautious than his team regarding the investment environment. 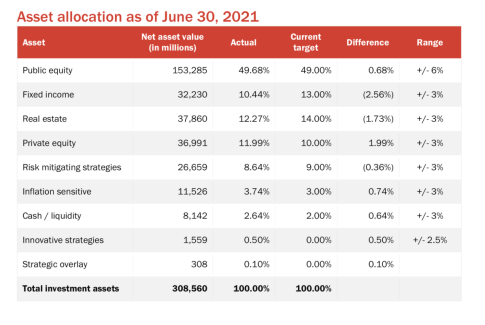 “I’m so worried the government’s put out so much stimulus, the US has built up such a debt load eventually we have to pay that back,” he says. “I’m looking at that deficit and the transition from remote back to the office and I don’t know what will happen. Personal income in the US will go down as people go back to work, it’s crazy.”

The official CalSTRS’ investment view is cautiously bullish and the fund is at market weight in equities.

“We’re all looking to the fall and trying to figure out what’s going on,” he says.

One thing Ailman can commit to is the fund’s positioning regarding climate change.

“I’m really committed to turning our portfolio around in terms of climate change and this is not a one-year thing. At COP26 we need to see something happen and commitments to come out. It is such a profound change, it won’t be smooth on the economy and it is also a very long-term impact.

“We want to concentrate on actually doing stuff. We’re going to do some investments, change the portfolio and do things to be an example for others, to get the portfolio set up to be prepared for 2030 and beyond.”