Listen to the full talk on Geopolitics, Brexit and Europe by Mike Kenny, professor of public policy at the University of Cambridge, hosted by  Niall Quinn who is global head of institutional business at Pictet Asset Management.

There is no certainty to how the United Kingdom’s Brexit drama will play out and the country faces a perfect storm, said Professor Mike Kenny, professor of public policy, University of Cambridge speaking at the Fiduciary Investors Symposium. The latest development, whereby the Labour party has entered the negotiations, has complicated the process even further and created more instability in the Conservative party. “Even if there is a compromise deal, could the leaderships carry their parliamentary parties through it?” he questioned, warning that a ‘No Deal’ could happen on 12th April, the next “cliff edge.”

Kenny noted that the EU holds more cards in the negotiating process. If the EU grants a long extension, it could involve the UK commiting to a general election or another referendum. If the EU refuses an extension and Prime Minster Theresa May fails again to get her Withdrawal Agreement through Parliament, the country could face a “binary choice” between revocation or cancelling Brexit, and ‘No Deal.’

Kenny also noted how Brexit has become the most salient point of political identity in the UK. “It’s what people care about most,” he said. A general election raises the prospect of a radical left-wing government under Jeremy Corbyn. Brexit is also straining the UK’s own internal relationships, he said. The sight of “meltdown in London” is fuelling Scottish independence, and a general election could lead to a hung parliament that combines a Labour coalition with the Scottish Nationalist Party, the SNP. Brexit also threatens Britain’s relationship with Northern Ireland, with the prospect of a ‘No Deal’ and the ensuing hard boarder, bringing the boarder issue between Northern Ireland and the Republic of Ireland “alive,” and putting the Good Friday agreement in jeopardy. “The possibility of nationalist backlash against no deal is very real,” he said.

The UK’s international standing has been affected by Brexit, he said, noting that Britain’s soft power has been diminished. Political turmoil in the years ahead suggests instability will continue with an impact on the economy. No Deal without an agreement is likely to lead to a drop in GDP and slow recovery. “The harder the Brexit the more likely the impact on GDP,” he said. Moreover, high levels of employment, one of the UK economy’s strengths, could reverse.

Brexit also poses a challenge for many European countries. They are pushing for more integration while simultaneously trying to navigate the growing sense amongst their voting populations that Europe equates to a loss of sovereignty. “The EU is wrestling with how to balance these conflicting themes,” he said.

The benefits could be felt in economies like Poland, keen to see its skilled workforce return. If UK businesses relocate to Europe, the EU also stands to gain. However, he is not convinced that Brexit will lead to other countries pulling out of the EU. The UK has always been a reluctant partner, he notes. 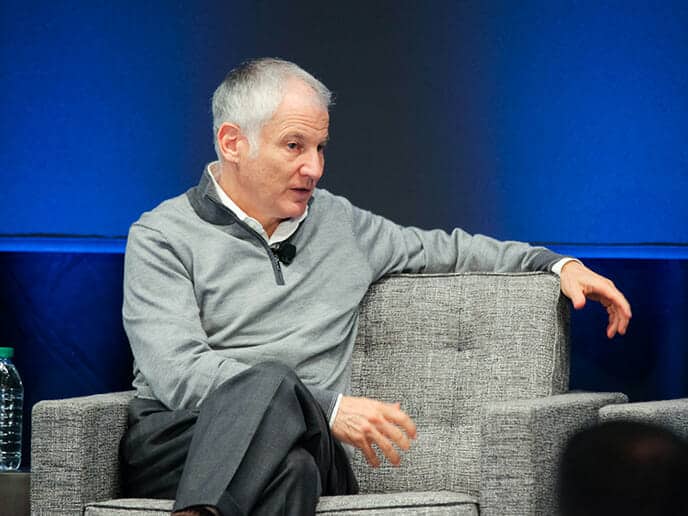 An overwhelming number of delegates at the Fiduciary Investors Symposium said the funds management industry was not doing well in innovationMartin Gilbert, who started Aberdeen Standard Investments in 1983 and is now chair, said industry participants needed to innovate and disrupt themselves.
Amanda WhiteApril 10, 2019