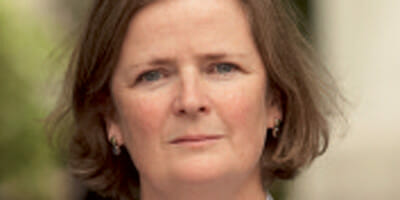 She made the decision after a near-fatal skiing accident when she says her life passed before her.

She is BP’s first group leader to do so and is evangelical about the benefits.

“Part-timers need to come out of the closet and know they can achieve at this level,” she says, speaking from the company’s headquarters off a quiet central London square.

“I’m setting up a charity to help support executive-level part-timers.”

They couldn’t have a better champion for the cause. As head of one of the largest growth-seeking UK schemes, Bridgeland is among the country’s most influential institutional investors. Her keenly observed strategy now includes diversifying growth to include emerging market equities and high yield, as well as building up an infrastructure portfolio from scratch as the fund begins to mature.

Until now the scheme has avoided infrastructure for easier returns in other areas where its expertise lies.

Bridgeland says the private equity-style of most infrastructure investment has also put her off.

“Other pension funds have been able to directly bid for projects, but we have lacked the inhouse skill to do the same.”

Now, with the fund maturing and gilts so unattractive there is a need for cash flow, the time has come, she says, to broaden horizons. She expects BP’s first infrastructure foray to be a UK-based debt investment, but says the portfolio will develop in other ways going forward.

“As an oil company, BP does a lot of infrastructure, so there are related skills and my dream is to deploy some of those,” she says, adding that unlike in growth assets with infrastructure, it is more important for the portfolio to be diversified itself, rather than against the sponsor. She also thinks BP will look abroad for opportunities, most probably in Europe.

“Are you paying a ridiculous price to somehow get that RPI linking when in fact you could do something with the currency?” she asks.

She also notes how Canada’s big pension funds began to invest outside Canada at the same time cash flow grew in importance for them. Now it is just a question of patience, a virtue she says she doesn’t particularly have, until the right opportunity arises.

BP is one of many UK funds on the infrastructure hunt and others, not cash-flow positive and prepared to pay more, will be at the front of the queue. “It is about knowing what you really want and at what price. I don’t think the pensions industry is good at that yet. It is good at looking at the value and total returns, but not really good at looking at the cash flows.”

Equities: a work in progress

Emerging market equities are also on her list. Of BP’s 80-per-cent allocation to growth-seeking investments, which comprise public and private equity and property, 36 per cent is invested in UK equities.

It’s an anomaly that is surprising given BP’s own prospering in emerging BRIC markets particularly. The fund is seeking opportunities in these markets’ fast-growing companies, especially those poised to benefit from consumers buying more local brands.

“We don’t want to miss out on this. We have some exposure to emerging markets through our Far East portfolio, but we are light on Russia and South America,” she says. “This is a work in progress.”

However, Bridgeland balances her enthusiasm with the reasons for BP’s historical caution in emerging markets, regarding governance in particular. She questions whether growth in emerging market economies is passed on to listed state-owned companies on local stock exchanges: “How much of these shareholdings are actually being controlled by somebody else? As a shareholder, do you have the ability to engage and influence strategy?” she asks.

Bridgeland is also scouting for opportunities in high yield and credit. Here, investment will focus on direct lending to companies, an asset class in which she would like to call on sponsor expertise again.

“This is an area where we could develop strength because BP is used to dealing with lending markets,” she says. It’s an allocation that has nagged for development since the financial crisis when, she says, the fund could have “done more” to seize opportunities in distressed debt. Yet she is also sure it has been right to be thoughtful and cautious.

“Would it have made that much of a difference? Probably not. We needed the world to recover to take us back.” She is also inherently cautious when a particular asset class becomes highly sought-after. “It’s when you see dedicated conferences. That’s when you know there is marketing money being put into this,” she laughs.

BP is now adding Asia to its European and US private equity portfolio, begun in 2000.

Initial funds-of-funds allocations have now matured and the focus is on direct-fund investments. Although the scheme “will carry on committing in a steady way”, she says the portfolio got up very quickly and that this constrains the amount they have been able to invest.

“Our philosophy has always been that we can live with market risk because of our sponsor,” she says.

She is bemused by the choice of hedge funds – “How do you choose the right one?” – and believes that many UK funds developed hedge fund strategies because they couldn’t stomach risk during the financial crisis, only to now regret it. Nor do hedge funds fit with BP’s inhouse bias, however she does believe the tendency to manage assets in house will change over time as the return-seeking portfolio begins to dwindle. She says an equity house pursuing bond-like strategies will either have to build up expertise in these new areas or outsource, and she questions whether it would be worth nurturing strong new internal teams.

“Within 10 years the organisation will look different and we will be doing different things,” she predicts. Liability matching assets currently account for 20 per cent of the total portfolio and comprise UK corporate bonds, gilts and cash.

The scheme’s ability to portion so much to growth assets is attributable to its steely sponsor with an eagle eye on funding levels, currently at 100 per cent.

“Every year we review what our funding level is and what the contribution should be,” she explains. “If something happens that has a big impact on the funding level, it really does protect the downside if you do something about it quickly, rather than if you leave it for three years.”

But in spite of the scheme’s unusual and continued sponsor support, Bridgeland is also able to see that times are changing. She is mindful that BP closed its defined benefit fund to new members in 2010 and that tax changes in the UK have reduced pensioners’ benefits. “We are looking forward as the fund matures and its importance to BP changes,” she says, a statement typical of her balanced approach to investing and life in general.