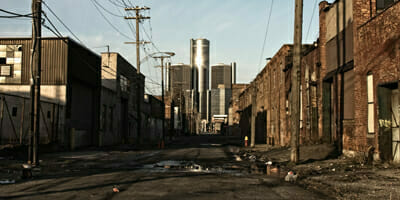 Even using the assets of the pension plan was not enough of a leg-up to save the city of Detroit from bankruptcy. As the last words in the song Put your hands up for Detroit by Fedde Le Grand say, it is system shutdown. The fiscal demise of this city may be a lesson for other public funds about the unqualified need for a reality check. Now, (finally) it must be time to talk.

I’ve always been a fan of intervention. And sitting down with the stakeholders of US public pension funds is my idea of fun. Let’s talk. What are you afraid of? Why is there not a real conversation about the underfunding situation America’s public pension system is facing? What is stopping them from “manning up”, as we say in the West, to the unbelievable unreality that that pension fund world is living in?

So what is the reality? For one, a return of 8 per cent a year for the next 30 years is not possible. Further as academic research, including the most recent paper by academics at Maastricht and Notre Dame, Pension fund asset allocation and liability discount rates: camouflage and reckless risk taking by US public plans? shows, linking liabilities to return expectations is not the optimal way to structure a fund. As a demonstration of that fact, defined benefit public and corporate funds in Europe and Canada do not have actuarial structures that dictate that connection, and neither do US corporate funds. US public pension funds are unique, in a bad way.

This structure also hides the fact that the underfunding situation is actually worse than it appears. One of the authors of this paper, Martijn Cremers, says that while the average funding level of US public pension funds is reported as 80 per cent, in reality it is much worse, with Pew Research Center estimating it is more like 57 per cent.

According to the paper, the fact that US public funds equate the liability discount rate to the expected rate of return results in the funds “camouflaging the degree of underfunding”.

“It makes liabilities very hard to measure. It is subjective and hard to argue about,” Cremers, who is professor of finance at Notre Dame, says. “Liabilities shouldn’t be hard to define or be so subjective.”

Politics, finance and ethics. It’s a murky stomping ground, but the world of US public pension funds, more than ever is a political quagmire.

The complexity of the politics in these funds, and the power and financial validity it gives the state, unions and staff, means that the reality is being ignored.

Solving the underfunding issues in these funds will require political courage, starting with an honest assessment of the reality of the underfunding position. In simplistic terms, you can’t get from A to B if you don’t know that you’re at A.

To this point Cremers says US pension funds need to be as objective as possible about their liabilities, which would allow an equally objective assessment of the outcome and current promises.

It is then possible to do asset liability modelling and think about asset allocation with the right perspective.

“If a more realistic liability discount rate is used, then it is a more dire picture of funding status. But then we can talk about how to respond, and at least there is a conversation about where we are,” Cremers says.

“As a financial economist, I can say that you make better decisions if you are realistic about where you are.”

But this is not a new conversation.

In 2009 a brief by Pew found that 30 US cities at the centre of the country’s most populous metropolitan areas faced more than $192 billion in unpaid commitments for pensions and other retiree benefits, primarily health care.

As part of its American Cities research, Pew says that “unfunded pension and retiree health care obligations pose a significant concern for city budgets. Although these unpaid bills are not due immediately, they limit policymakers’ ability to invest in other priorities because they place a claim on future revenue. Every dollar that goes to plug a hole in a city’s retirement funds is a dollar that cannot be spent on education, public safety, libraries, and other services.

It also becomes a vicious cycle of robbing Peter to pay Paul.

“The longer unfunded liabilities go un-addressed, the larger the bill facing future city budgets and taxpayers. To shore up retirement funds, local officials may have to cut services, reduce the workforce or raise taxes. Cities also can pay a price through higher borrowing costs because credit rating agencies incorporate unfunded retirement costs into their analyses,” the Pew report says.

The Detroit story couldn’t have been summarised better.

The city has a liquidity crisis for some time. Without intervention the city would have run out of cash before the end of the 2013 fiscal year. Enter the pension fund. In order to get a positive cash flow of $4 million in fiscal year 2013, it deferred about $120 million of current and prior year pension contributions and other payments. But the pension fund is about $3.5 billion underfunded, and at this level of underfunding it is estimated the city would have to contribute approximately $200 million to $350 million annually to fully fund currently accrued, vested benefits.

Some perspectives on the city’s bankruptcy, such as that of a recent Atlantic Cities article reckon that all is not lost for Detroit. The argument is that the difference between fiscal and economic crisis is marked, and that Detroit’s bankruptcy signals a beginning.

This may be true for the music industry or entrepreneurs and investment capital, but retirement and the funding of it does not have the luxury of such creative ventures.