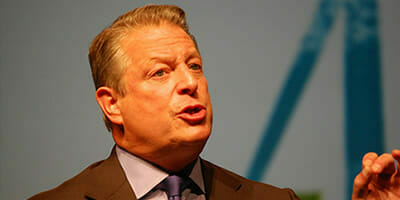 Al Gore, former US vice president and co-founder with investment banker David Blood, of Generation Investment Management, said sustainable capitalism is not an argument that pension funds should sacrifice value in return for values.

Rather it is consistent with the core fiduciary relationship to match liabilities.

Gore defends capitalism, saying it is at the base of every successful economy: it efficiently allocates resources, it is congruent with freedom, and importantly it is the one system that unlocks the future of individuals with incentives that unlock ingenuity. However, he is despondent at how capitalism is being pursued.

“No wonder with those virtues that everything’s going great in the world’s economy,” he says ironically. “If capitalism has all these strengths and is hegemonic in organising economic activities, why do we have these problems?”

“In the US for sure a public pension crisis is pending, California, Rhode Island, go right down the list. The conspiracy of the present against the future is bigger than I imagined,” he says. “If we are trying to predict into the future such a narrow slice of information we ignore the possibility of ruining civilisation as we know it, there’s something wrong with the way we’re pursuing capitalism.”

“We’ve made our choice for capitalism – now the focus is on how we pursue capitalism. The concept of sustainable capitalism is not an argument that pension funds should sacrifice value in return for values. Rather they should start from a premise that it should be best practice because you’ll get better returns over time.”

He says a wider scope of information assessment and processing is crucial to sustainable capitalism.

“As vice president in the White House for eight years, every morning for an hour I got a review of the military information, from many sources. What we see with our eyes is not all that is there, we can organise ourselves to include more information,” he says. “We are used to focusing on quarterly reports, number metrics are all important but only a narrow source of the value spectrum. If companies ignore the people associated with their supply chains or environmental impact then there is brand damage, that information is directly relevant to the value of the equity assessment.”

(As an aside Apple Inc, of which Gore is a long-time board member recently hired former head of the US Environmental Protection Agency, Lisa Jackson to head up its environmental effort.)

Gore believes there is a governance crisis in the world today.

“Democracy having become accepted as the best form of government has been failing to meet the test of leadership required in 21st century,” he says.

“The US has been the de facto leader but in the last decade the quality of US governance led to a crisis of confidence in the US leadership. The world is relatively rudderless.”

Specifically, he says that US public pension funds have taken some immense risks by allocating large percentages of their portfolios to high risk assets, because governance structures reward them for doing so.

It is within investors’ power to change this.

Gore’s partner at Generation Investment Management, David Blood, says long-term asset owners have a critical role to play, and must first assess what is in their best interests.

“What will they support to realise more value?” he asks. “It is a challenge to get them together and get them to listen. Investors are uncomfortable in the conversation around sustainability. What has frustrated us is we always thought it gets a better sense of the company.”

Gore quotes the psychologist, Abraham Maslow who says if the only tool you have is a hammer then every problem looks like a nail.

“The same is true if the only thing you use to assess a company is a price tag.”

In its seminal paper, Sustainable Capitalism, Generation outlined mandated integrated reporting as one of five recommendations to move towards sustainable capitalism.

“Financial statements are one perspective in the value of the business. You need to look at the sources of capital – physical, intellectual, and social capital – and only one of those is on the balance sheet,” he says. “Other forms of capital don’t come equipped with a price tag. It doesn’t mean quantitative analysis can’t be incorporated but you have to use different systems.”

Gore urges pension funds to start asking corporations questions, saying it will “have a profound effect” on the behaviour of companies.

“But I want to repeat a central point. This is not social engineering or getting pension funds to take on social policy or government reform. But you should do it because it improves your performance, and matches your vision with a wider spectrum of what reality really is.”

If investors were to focus on one aspect of the five recommendations, Blood says that identifying and incorporating risks of stranded assets would be the first choice.

“The most relative commercial issue in portfolios is to mobilise capital to low carbon,” Blood says.

The second would be around incentive structures.

“If incentive structures are short term and rewards are reinforced by short term performance then the ability to see the long term is damaged,” Gore says. “I’ve only been in the asset management business for 12 years but I have learnt that people will do what you pay them to do.”