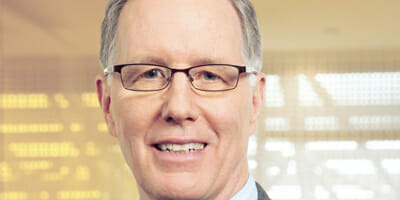 Even the most successful and well run pension plans are facing underfunding challenges. The $129-billion Ontario Teachers’ Pension Plan is the latest to investigate solutions to solve the mismatch between the pension promise and the funds required to meet that, says Jim Leech, chief executive of the organisation .

OTPP has appointed a taskforce – chaired by Dr Harry Arthurs, former dean of Osgoode Hall Law School in Toronto, president emeritus of York University and chair of Ontario’s pension commission – to investigate how to reduce the cost of the mismatch caused by the difference in the time members spend in work and retirement.

Among other generous benefits, OTPP has generous early retirement benefits and on average teachers work for 26 years and retire for 31.

“We can change benefits to deal with these things or change the rules around some of those promises, and this is what the taskforce is all about,” Leech says.

The task at hand

He says the taskforce will look at how to reduce the cost of the mismatch and is investigating about nine different options. This will be reduced to three and then discussed with the membership.

“For example, we have generous re-employment rules, and we fund the mismatch between a member getting the Canadian pension and retirement. Why? It is just encouraging people to retire early,” Leech says. “All of these things impact the demographic of the workforce. It shouldn’t be the pension plan driving this; the employer should be driving it.”

The taskforce will also look at intergenerational risk, which now falls on the shoulders of younger and needs to be resolved, he says.

OTPP brought in inflation protection, now 100-per-cent conditional, which Leech says has gone a long way to building in flexibility into the fund.

“We are about 75 per cent to solving these problems, and now the taskforce is completing on that,” he says. “Every year a decision is made whether pensions are increased on the rate of inflation depending on the condition of the plan’s funding status. This is the perfect toggle to use in managing the plan. It is now dialled back to 45 per cent, but it can go as low as zero. If times are good, then it can go up.”

OTPP member benefits are calculated as two times the number of years worked multiplied by the best five-year average. Now there is no guaranteed inflation protection on that.

Leech says by introducing that initiative, the liability has been reduced by about $12 billion.

The fund is in a relatively good position, compared with its global peers, and is currently 97-per-cent funded.

OTPP is globally regarded as a leader in governance among pension plans, and Leech says it is its governance structure allows the sponsors to address the funding shortfall.

“It is 50-50 shared between the employer and employee, so it is in both of their interests to solve this. With most US pension plans, it’s still part of collective bargaining.”

The fund has produced a documentary that highlights the underfunding issues facing pension funds around the world, educating the public on the effects of the financial crisis, low interest rates and demographic changes.

Part of the impetus of the video was to put OTPP’s problems in context, he says, that this is a global pension phenomenon.

“The fallout of the financial crisis, in particularly low interest rates, means the prognosis for growth is not good. Our plan is extremely interest-rate sensitive. If interest rates go down then our bond portfolio goes up, but our liabilities go up even faster. We are constantly trying to manage that. Our liability-driven investing has increased and in the past five years have pushed that way – real estate, commodities, infrastructure. We also have an enormous bond portfolio, about $60 billion, which is almost entirely in Canadian and US sovereign bonds.”

Meanwhile the fund continues to expand, and has just opened a Hong Kong office.

OTPP allocates about 15 per cent of the fund to emerging markets and will increase that to 20 per cent in the next couple of years.

“It is estimated that 80 per cent of the world’s trade will be intra Asia by 2025. If that is true, then we think you have to be there,” he says.

Leech will retire this year after 12 years at OTPP and a tenure as only the second chief executive of the fund. Head of fixed income and alternatives, Ron Mock, will take over the role.

Leech identifies four factors in OTPP’s success, with the governance structure at the top of the list. He also says the culture, which is very learning-based, and humility of its professionals plays a big part. The fund’s proprietary risk system, which is instrumental in the fund allocating according to risk, not asset classes, is its secret sauce, he says.

OTPP has 1000 employees, about 275 of whom are investment professionals.