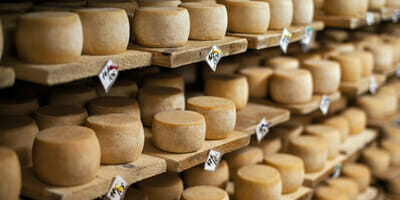 On one hand, the decision by one of the United Kingdom’s leading foods businesses, Dairy Crest, to plug its £84-million ($130-million) pension deficit with cheese smacks of desperation. Any proactive investment strategy to get the $1.2-billion pension fund back on track has been abandoned for a funding measure using unconventional sponsor assets to plug investment losses. On the other hand, isn’t the strategy whereby trustees get $93 million worth of maturing cheddar as security against the deficit if Dairy Crest goes bust a way to help ensure the beleaguered scheme survives in the long-term and a bid to recover a deficit in a more adventurous way? As funding and investment strategies become increasingly intertwined for the UK’s debt-riddled defined benefit schemes, it certainly shows a new creativity emerging in the market.

Asset backed funding, in which a company uses business assets to generate cash, which is then paid to the pension fund, first appeared in the UK back in 2007 when a handful of retailing groups used their property portfolios to fund pension deficits. It involves transferring the assets into a separate entity, such as a special purpose vehicle or partnership. Typically, assets used will generate income such as rent or royalties. According to consultancy KPMG, there were 10 asset-backed deals in 2010, eight in 2011 and seven in 2012. Deals involved blue-chip names such as engineering group GKN using intellectual property income from its patents as security, and drinks group Diageo, makers of Johnnie Walker and Smirnoff vodka, pouring $568 million worth of whiskey into its $1.3-billion deficit. Now the concept has gone one step further with companies exploring income receivables as pension guarantees and even brand value. Asset-backed funding hasn’t taken off outside the UK but, regulatory issues aside, there’s no reason why US corporate pension funds just waking up to the defined benefit nightmare (Boeing is the latest to close its scheme with liabilities of $75 billion) couldn’t make the leap.

It seems to answer all kinds of knotty problems with one solution. Defined benefit schemes can’t expect asset growth to plug deficits in the current climate of low interest rates and poor returns, where static asset allocations definitely don’t deliver. Many funds won’t challenge traditional thinking, with only the biggest schemes with the strongest covenants recruiting the skills to push bolder strategies such as alternatives. And because gilt yields are at record lows, many companies hope deficits are inflated anyway – pension liabilities are calculated referencing bond yields so when yields are low, deficits are high. It has left sponsors even more reticent to put large amounts of cash into their pension schemes, which under UK law they wouldn’t be able to recover should the fund return to surplus. Asset-backed funding even neatly ticks this box as the assets are ultimately controlled by the business, reverting to the company at the end of the term.

It’s a funding strategy that positively impacts investment strategy too. Dealing with the deficit helps solve the bane of mismatched investment strategies in which schemes have plumped for risk despite ballooning liabilities. Asset-backed funding was the catalyst in a turnaround at the $9.6-billion defined benefit scheme of UK retailer Marks and Spencer, which slashed its deficit from $2 billion in March 2009 to $450 million last year. In 2007 the 120,000-member fund transferred $2.3 billion of the company’s property assets into a Scottish limited partnership with the M&S UK Pension Scheme. Under the partnership agreement, M&S retains control over the properties, however the pension scheme is entitled to receive an annual profit distribution earned through leasing the properties back to M&S. As a result, the M&S pension scheme was able to recognise the fair value of these future income streams as an asset in its accounts, leading to an improvement in its funding position. The scheme has pared risk to a 16-per-cent equity allocation, with the rest in bonds and fixed income, in contrast to most UK funds, which still allocate on average half their portfolios to equity.

But shaving deficits through asset-backed funding can just as easily help schemes maintain their levels of investment risk. Strong sponsor covenants mean schemes can better withstand shocks – the current wave of de-risking is attributable to weak sponsor covenants. It could offer confidence for cautious defined benefit schemes, which have whittled down their growth portfolios in favour of fixed income assets and derivatives, to push the risk premium of equities once again. Or, as one commentator put it, “help kick overly prudent investment strategies that manifest in holding too high an allocation to government bonds into touch.” In short, asset backed funding gives struggling defined benefit schemes more room to manoeuvre. They could hold their risk allocations, reduce risk or just use it to reduce the levy they pay the Pension Protection Fund, the lifeboat fund that says the UK’s 6316 defined benefit schemes hold a collective deficit of $366 billion, with the average workplace pension 83-per-cent funded.

The real value of cheese

Yet surely hazards lurk in the more unusual asset-backed funding structures. Are trustees getting the risk at the right price and how do they assess the value of cheese? How will the value of the asset change over time and what if salmonella infects the cheese or it melts and becomes worthless? And if cheese is suddenly such a valuable asset, why is it only fit for pensioners? Why not pay our corporate big cheeses in cheddar too? Trustees must be careful what assets they use and satisfied that they will hold value in the event that a company ceases to trade. I can see why companies and trustees increasingly consider asset-backed funding. Deficits are ballooning but sponsors lack cash and the 1990s era of contribution holidays is a distant memory. Members need security and investment strategy a kick-start. It’s just the cheesy strategy that smells a little off.