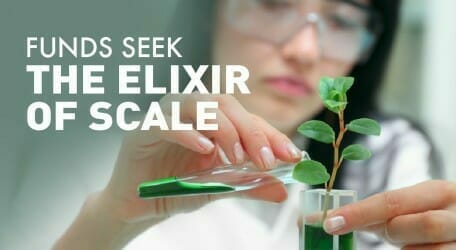 The investment firepower and cost savings promised by economies of scale have enraptured the Australian superannuation industry. This has instilled in some funds an urge to merge in order to enjoy the benefits of being large. However some investment chiefs believe that bigger size brings a new set of problems that can undermine performance.

The quest of many funds, to create optimal investment strategies at the most reasonable cost, has spurred them into mergers to reap the benefits of being large.

Big funds can, for instance, staff more investment professionals to research investment opportunities and risks more thoroughly; use their size to access strategies run by highly sought-after investment managers; negotiate lower fees and preferential commercial terms with service providers, such as fund managers, custodians, administrators and wholesale insurers; and internalise operations that were previously outsourced to these providers.

Bigger size gives transformative opportunities to funds. “Scale is seductive,” admits Sam Sicilia, chief investment officer of the $10 billion Hostplus. But the fund is resisting this siren song until it sees incontrovertible evidence that size is crucial to investment excellence in superannuation.

All debates about scale in Australia refer to the operations of the nation’s largest defined contribution fund, the $42 billion AustralianSuper. Ian Silk, chief executive officer of the fund, has overseen its attempts to exploit the benefits of the decreasing unit cost of its operations as the fund has grown. He has learned that size, by itself, is worth nothing.

Silk says the revered benefits of scale in a competitive investment market do not come automatically with increased funds under management.

“We have the latent potential. But the question is whether you can exploit it for stakeholders.

Doing so requires investing in skilled people, resourcing them with the technology and systems to extract scale benefits and then making sure it happens.

Mark Delaney has first-hand experience of how greater scale can impact an investment portfolio. He managed investments for the $3 billion Australian Retirement Fund (ARF), which merged with the Superannuation Trust of Australia to form AustralianSuper. Delaney is now chief investment officer of AustralianSuper and commands a $42 billion portfolio and a team of 30 investment professionals.

The greatest difference between then and now, he says, is having more staff to deeply research markets, evaluate investment opportunities more thoroughly and implement portfolio decisions more efficiently. The portfolio has grown immensely and includes a much broader range of assets, but Delaney now has a greater understanding of how it functions – and its potential.

“Greater team depth gives us the chance to do more strategically, including sector tilts, because you’re not as rushed running from one job to another,” he says.

The fund, which is in formal discussions with the $1.6 billion Asset Super about a potential merger, recently commissioned asset consultant JANA Investment Advisers to assess whether super funds with $10 billion or more under management were more successful investors than smaller funds.

JANA concluded that there is little or no correlation between fund size and returns. Bigger funds did not perform badly but their smaller peers were not disadvantaged by their size.

It found that once funds reach a “critical mass” they can exploit benefits through economies of scale.

These include: tiered fee structures within collective investment pools; greater control over investment strategy through discrete, cost-efficient mandates; the ability to provide a broader range of investment products at lower costs per member; and the use of larger mandates to negotiate greater alignment with service providers.

However, Nolan says that some benefits of being small can be compromised when a portfolio grows into the tens of billions.

“Getting beyond a $10 billion fund, it becomes harder and harder to get efficiencies,” Nolan says.

He says larger funds find it more difficult to change asset allocations and invest with managers who limit how much they are willing to invest in particular strategies.

“We manage $1 billion in Australian equities with six managers, and to change one manager is a significant process,” he says.

This balance is close to what some fund executives, such as Sicilia, call the “sweet spot” of fund scale. It is different for each fund, he says, and is reached when a fund is not forced to reject an investment idea because it is too small.

Sicilia knows the feeling of hitting the sweet spot.

“There is nothing I’m aware of in which the Hostplus board would say: ‘It’s a great idea but we don’t have the money or resources to do it,’” he says.

But this sensation can sour as, inevitably, funds grow bigger – and bigger – in a market where contributions are mandated.

“No fund can stay in the sweet spot,” Sicilia says. What is worse, however, is that “size brings headaches”.

An initial problem is the difficulty of investing with funds managers who have capacity constraints. By accepting a large mandate from a big fund, a manager takes on the business risk of one day losing their big client and seeing revenues drop sharply overnight.

Some managers prefer to have a more diverse clientele of smaller funds, Sicilia says.

Moreover, these funds have less ability to use the size of their mandates as a bargaining tool to negotiate lower fees. He asks: what incentive does a manager have to accept a large mandate, which can incur considerable business risk, for a lower fee when they can take on a number of smaller mandates from smaller funds that pay higher fees?

He also says that big funds with investment teams must be wary that their sector specialists do not fall prey to “asset-class capture” and champion their area of expertise irrespective of market conditions.

Sicilia does not know how big Hostplus will be when it outgrows its sweet spot. But he is certain that its investments will suffer when it does.

“There has to be a point where a fund becomes so big that its size is detrimental to the investment case,” he says.

Delaney disagrees. He says funds strike the sought-after sweet spot when their strategies work harmoniously. This can happen regardless of their size.

“It can happen for small, medium or large funds,” he says. “But consistently, larger funds can operate more cheaply than smaller funds and have more resources. That’s unambiguous.

“Our performance will be good or bad depending on how skilful we are at getting the right strategy for the fund.”

Delaney says AustralianSuper has never been unable to invest in a strategy or manager because it is too large or will force a manager to breach their capacity constraints.

However Jack Gray (pictured), principal of consultants Rawson East and a director of placement agent Brookvine, says market impact is a real concern for the world’s bigger institutional investors.

“When you get to a certain size you have market impact,” Gray says. “That is a well-known diseconomy of scale.”

Gray consults to APG, the $375 billion Dutch pension fund. “Almost every deal is too small to have a significant impact on [fund] returns,” he says.

Delaney says his use of active managers has not changed since the days when he managed a $3 billion portfolio at one of AustralianSuper’s predecessors. Then, ARF then indexed half of its Australian equities portfolio; now, AustralianSuper does the same.

He does not believe that big funds should abandon active investment strategies and focus exclusively on managing beta risks.

“A large chunk of performance comes from asset allocation and sector tilts. That is always the case,” Delaney says. “But if you are skilled at manager selection it is a material value-add, and if you aren’t it will detract.”

“If you’re a small fund you don’t necessarily have disadvantages as you may be able to get in to a new fund manager that may become very successful. A big fund may not be able to get in because of capacity constraints or because they don’t want to invest in a new manager.”