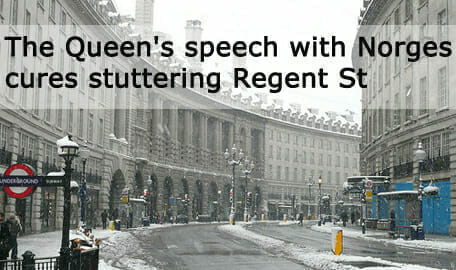 The UK Crown Estate, which as the name suggests manages the assets and estate of the Crown, has entered into the second joint venture with an institutional investor in as many months. Norges Bank, which manages the 2,908 billion kroner ($498 billion) Norwegian Government Pension Fund Global, has purchased a 150-year lease on a 25 per cent stake in the Estate’s Regent Street properties. This follows a deal in December with the Healthcare of Ontario Pension Plan.

It is the first real estate investment for the Norwegian sovereign wealth fund, which received a mandate in March last year to invest as much as 5 per cent of its assets in real estate. This investment cost the fund £452 million ($721 million).

The partnership will give the fund 25 per cent of the properties’ net income, which primarily comes from office and retail space rent. The Crown Estate will retain 75 per cent of the income and will continue to be responsible for the management of the portfolio.

“We’re very happy to have signed an agreement and look forward to a long and beneficial partnership with The Crown Estate,” global head of real estate asset strategies at Norges Bank Investment Management, Karsten Kallevig, said.

David Shaw, head of Regent Street at The Crown Estate said: “We are delighted that one of the world’s largest sovereign wealth funds, has chosen The Crown Estate and Regent Street for its first-ever property investment. NBIM’s long-term approach fits perfectly with our ongoing commitment to regenerating Regent Street to create an international retail and business destination.”

In December the $31 billion HOOPP, which has about $5 billion in real eastate, took a 50 per cent stake in the £100 million, St James’s Gateway development, in London W1, together with the adjacent Clydesdale block. Similarly, the Crown Estate will retain the freehold for the blocks and grant the joint venture a new 150-year head lease, and it will also oversee the development and directly asset manage the properties upon completion, which is expected in 2013.

The Crown Estate dates from 1066. After the Norman Conquest, all the land belonged to William “in right of The Crown” because he was King. Despite centuries of change in law and custom, the underlying ownership of The Crown still exists and there is always a presumption in favour of The Crown unless it can be proved that the land belongs to someone else.

The Crown Estate, managing a property portfolio worth £6.6 billion, today contributes more than £210 million to the UK Treasury.