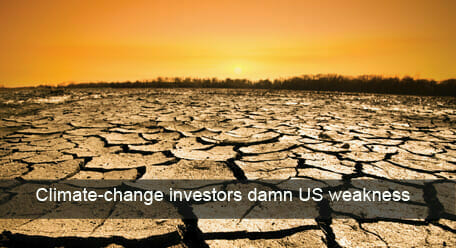 A group of more than 250 institutional investors has damned individual country national policies, particularly highlighting inadequacies in the US, as preventing more private capital flowing into climate change-related investments. The collaborative stance comes ahead of the United Nations Climate Change Conference in Cancun, Mexico.

Global clean-energy investments are expected to eclipse $200 billion in 2010, which is substantially less than the estimated $500 billion required annually by 2020 to restrict warming to below 2 degrees.

While low-carbon global investment is increasing, especially in Asia, investors say substantially more private capital would be available for renewable energy, energy efficiency and other low-carbon technologies, if stronger policies were in place.

The investors from Europe, the US, Asia, Australia, Brazil and South Africa signed a statement calling for government action on climate change, warning action needs to be taken to fight global warming immediately or governments risk economic disruptions far greater than the recent financial crisis.

According to a report by the United Nations Environment Program, the US lags well behind Europe and Asia in clean-energy investing, supporting $20.7 billion in renewable energy projects in 2009, in comparison to $43.7 billion for Europe and $40.8 billion for Asia.

Investors had a particularly sharp message for the new US congress.

“Climate change may be out of vogue in Washington today, but it poses serious financial risks that are not going away and will only increase the longer we delay enacting sensible policies to transition to a low-carbon ecnomy,” Jack Ehnes, chief executive of CalSTRS, says.

The investors highlight that past experience in renewable energy is that, almost without exception, private sector investment in climate change solutions has been driven by consistent and sustained government policy.

Experience from countries such as Spain, Germany and China show how structured policies can bolster investor confidence and help drive renewable energy investments.

“These experiences also show how such policies can bring technologies down the cost-curve and eventually strengthen their competitiveness,” Ole Sorensen, chair of the Institutional Investor Group on Climate Change and chief of research and strategy at ATP, says.

The United Nations Climate Change Conference will be held in Cancun, Mexico, from November 29 to December 10, and encompasses the sixth conference of the parties serving as the meeting of the parties to the Kyoto Protocol.

It is estimated that up to 86 per cent of investment and financial flows into climate change are from the private sector, and the signatories to this statement have combined assets of $15 trillion.

Other areas where they hope to see progress in Cancun are:

*The financial architecture (access, government) of climate funding, which will facilitate a greater role for private investment