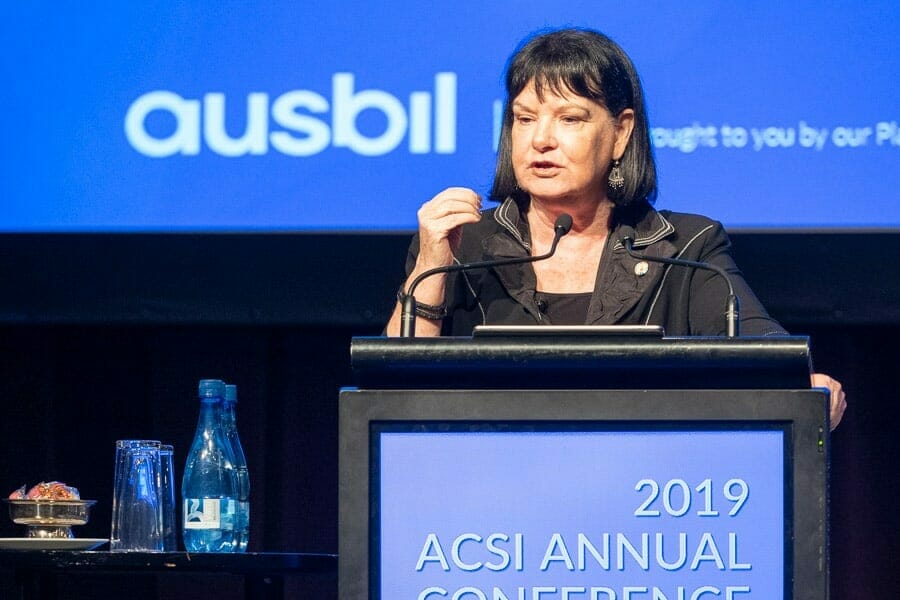 Inequality is overwhelming and the rules of the economy have to change.

“If we don’t heal the fractures of today’s workforce that have been caused by the current model of greed, we will see even greater inequality in years to come,” said Sharan Burrow, general secretary, International Trade Union Confederation.

“The consequent threat to economic and social prosperity can only increase the breakdown in support globalisation, deepen the age of anger and continue to undermine returns from our own investments.”

Burrow followed this up with a blunt warning that failure to understand and address social and environmental risk goes well beyond the potential damage to the reputation or share price of a company or an investment house.

“Decades of such behaviour is now undermining global economic security. An apology for failure won’t fix systemic social and environmental risks. We need to change the rules of the global economy.”

Burrow told conference delegates there were several lenses that could usefully analyse the impact of pursuing maximum returns at any cost based on the narrowest definition of fiduciary responsibility.

“Ultimately, the impact of such behaviour is proving to undermine long term sustainability with human, environmental and indeed investment costs that cannot be justified.”

Inequality is one lens, Burrow said, at the Australian Council of Superannuation Investors’ annual conference.

“Inequality is now recognised as a global risk yet the model of globalisation the world has pursued is itself a model of inequality by design.”

Working in the shadows

The global workforce is around three billion people, she told her audience. However, on her numbers, up to 60 per cent of them are working in the shadows – the informal sectors of all economies.

“It’s a sector of desperation with no rights, no minimum wages, no social protection – no rule of law,” she lamented.

“Women and young people dominate this sector in large numbers and new business models are emerging with the use of digital platforms are adding to these numbers.”

Worse, she went on to say, modern slavery is also growing with more than 30 million workers trapped in unacceptable conditions.

Burrow told the audience that informal work and modern slavery are increasingly found in the supply chains of multinational companies which were already a dehumanising environment with low paid, insecure and often unsafe work.

Most damningly, the ITUC head said investments at home and across entire international investment portfolios are implicated in violations of fundamental rights even slavery.

Climate change is another lens.

“Scientists are again raising the alarm. In essence we have just over a decade to stabilise the planet. Every part of our economy must shift – energy, production, construction, transport and services,” she warned.

Asked how business leaders felt about this, Burrow said capitalists are worried; they’re seeing that their business model isn’t sustainable.

But she drove home the point that there is a “bit of hypocrisy as well” – those same chief executives will hire lobbyists to push their cause through associations.

By flowing into corporate lobbying, she argued, dollars are essentially going against sensible regulations, against policy, against government intervention and are actually working against everyone’s interest.

“I don’t know of anyone who hasn’t and couldn’t make money from investing in companies that are about decency, about human rights and about sustainability,” she said.

To this end, Burrow has called for a new “social contract’ between companies and their workers underpinned by a new “Universal Labour Guarantee” and urged investors and corporations to make it part of their core business.

Key to the social contract are measures to ensure a just transition for climate and technological shifts.

Further, to help battle inequality, insecurity and a smooth  transition to a carbon-free future, Burrow wants businesses to hold a “social license to operate” such that they pay tax in each country of operation, that they have an employment relationship with those they depend on for doing the work that earns their profits and that they contribute to social protection.

“Equally we expect governments to mandate due diligence for all business to mitigate violations of human and labour rights.”

Finally, Burrow turned her gaze to global monopolies like Amazon that she argued exposed the failure of competition policy.

“Yet no effective due diligence is carried out by investors who are assisting the massive expansion of monopoly corporate power,” she noted.