There is a fundamental shift occurring in the relationship between companies and society. Whereas previously, profit maximisation was seen as the dominant purpose of a business, increasingly it is now being regarded as an outcome of a company’s broader purpose.

The idea behind ‘creating shared value’ was discussed in Porter and Kramer’s 2011 work where it was argued that the competitiveness of a company and the health of the community around it are mutually dependent. This bridged the gap between the long held dichotomy of creating value for shareholders and creating value for stakeholders.

Robert Eccles also tackles this idea by noting that companies have two basic objectives: to survive and to thrive. He argues that shareholder value should not be the objective of a company but the outcome of the company’s activities. In other words, rather than profit being the purpose, profit comes from pursuing a purpose that benefits society.

These considerations are shockingly important when you consider the size and impact of some companies. In 2016, 69 of the world’s 100 top economic entities were corporations rather than countries and the world’s top 10 corporations had a combined revenue greater than the 180 poorest countries combined (a list which includes Ireland, Israel, South Africa and Greece). These 69 corporations clearly help shape the social foundation of our societies.  The investment industry has an immense opportunity to influence how these corporations are run.

In 2009, Johan Rockstrӧm, executive director of the Stockholm Resilience centre, outlined nine planetary boundaries that are critical for keeping the earth in a stable state beneficial to life as we know it and attempted to quantify how much further we can go before there is a risk of “irreversible and abrupt environmental change”.

Human survival clearly requires the sustainable use of these planetary resources and complementing the planetary boundaries are social foundations below which there is unacceptable human deprivation.

Kate Raworth picks up this idea in her book, Doughnut Economics, and sets out a visual framework for sustainable development by combining the complementary concepts of planetary and social boundaries. The ‘doughnut’ (shaded green) represents the safe operating space for humanity: a social foundation of wellbeing that no one should fall below, and an ecological ceiling of planetary pressure that we should not go beyond. 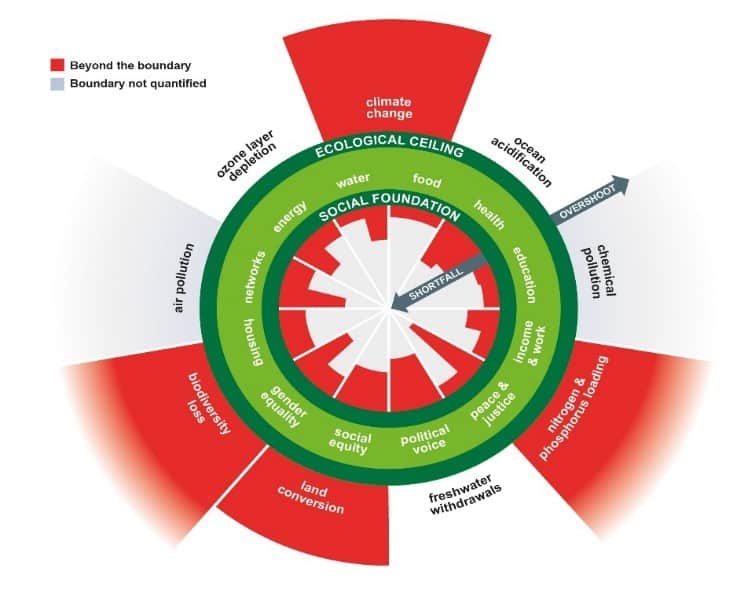 For a clear statement of what societal wealth and well-being includes, a good place to look is at the UN’s sustainable development goals (SDGs).

This universal set of goals, targets and indicators has been agreed by 193 member states, and covers a broad range of social and economic development issues expected to frame government agendas and political policies at least until 2030.

The SDGs address the most pressing systemic social, economic and environmental challenges in our world today and are arguably the most objective reference point for determining what is good for society.

With goals such as ending poverty, and hunger, achieving gender equality and improving access to clean water and sanitation, the SDGs point to a common language which the great majority of economies (and hence industries and organisations) can rally around.

However, the UN estimates that meeting the SDGs will require $5 trillion to $7 trillion in investment each year from 2015 to 2030. The UN has put out a strong call to action for the private sector to play a fundamental role in achieving these SDGs.

While government spending and development assistance will contribute, they are expected to make up no more than $1 trillion per year and so “new flows of private sector capital will be key, either through new allocations or by re-routing existing cashflows”.

In their 2017 report, The SDG investment case, the UN PRI argues that investment organisations should consider the SDGs when making strategy, policy and active ownership decisions based on a fiduciary duty to consider the risks and opportunities generated by sustainability risks.

In short, the SDGs can be used as a framework through which investment decisions can be made, in keeping with an investor’s fiduciary duty, while offering opportunities for global economic growth that could lead to better investment outcomes for beneficiaries over the long term.

The idea of shared value has since been extended by the concept of creating ‘system value’, a term first introduced by the Future-Fit foundation. A system value perspective places a business within society – it is a subcomponent – and places society within the environment. The logic is unarguable. And the perspective shows that a business cannot be considered as independent from either society or the environment. It will affect both of them – for better or for worse.

To understand how an organisation creates system value, one has no look no further than how it designs its business strategy and executes its operations to benefit its stakeholders, using its various sources of capital (financial, human, social, manufactured, intellectual and natural).

Admittedly the bar for achieving true system value is high, however we believe that organisations can contribute to this target by pursuing activities which help create better societies and a more sustainable environment.