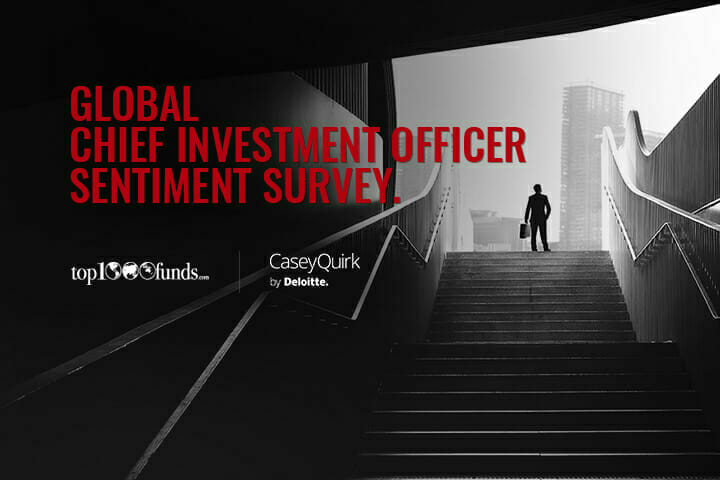 The fourth-annual Chief Investment Officer Sentiment Survey, conducted by conexust1f.flywheelstaging.com and Casey Quirk, a practice of Deloitte Consulting, has revealed a clear picture of how large institutional investors are viewing and responding to current market conditions.

While more respondents said they were confident of reaching these new, lower targets, (57 per cent, compared with only 27 per cent the previous year), there were still some concerns.

Falling equities markets were the most common concern (51.6 per cent cited it), followed by rising interest rates (40.1 per cent) and geopolitical risks (24.8 per cent).

In the 2013 survey, respondents said they allocated 60.3 per cent of their portfolio to active long-only managers, this has fallen to 57.9 per cent.

Instead, investors are looking to more exotic asset classes. Investors were planning to allocate more capital to infrastructure and real assets (31.8 per cent of respondents), liquid alternatives (29.9 per cent), emerging market equities (25.5 per cent), real estate (22.9 per cent), and private equity/venture capital (21.7 per cent).

Casey Quirk consultant Chloe Gardner says there are broad implications for the providers of long-only active management and their role, as it is not seen as a sustainable long-term strategy.

“The search for alpha is more challenging, and as allocations to infrastructure and real assets and alternative types of equities are increasing, there is a push away from long-only active, and a dramatic shift to good alternative managers,” Gardner says.

Her colleague, Casey Quirk senior manager Tyler Cloherty, says he has been observing the bifurcation of strategies between traditional and alternative for years.

“I’m surprised the reduction to long-only active managers wasn’t larger in this survey,” he says. “There is plenty of supply of new strategies; the question is, are there good enough managers with high-quality opportunities and track record to sustain the demand.”

The survey revealed reducing investment costs is a growing priority for investors, with 42 per cent of respondents calling it “very important”, compared with 36 per cent in 2017.

While investors are employing a wide range of strategies to reduce these costs, by far the most common that respondents mentioned was negotiating harder with external managers (57 per cent), followed by allocating more to passive or smart-beta strategies (26 per cent), insourcing (20 per cent) and shifting out of high-fee asset classes (13 per cent).

The most popular fee structure among investors is a performance-based sum with a smaller management fee.

Better control, rather than cost, is the primary motivation for insourcing. But it is clear that those investors with internal capabilities have lower costs than those without.

“There is a clear benefit of scale, because larger asset owners are more likely to negotiate with managers and insource asset management,” Gardner says. “They are more efficient and have better cost structures [based on] salaries and bonuses, rather than on basis points.

“For smaller asset owners, it might be better to wait it out to negotiate with managers, rather than take on the organisational and operational issues of insourcing, such as portfolio attribution and retaining staff.”

Cloherty says managers have been more flexible and open in negotiating performance fees, even in traditional strategies.

“This creates more operational complexity for managers, and sometimes more confusion for trustees in predicting costs, but the upside is in alignment and evaluating the value add of a manager,” he says.

The consultants say they are clearly seeing the preference for some combination of management fee and performance fee from the buyer side.