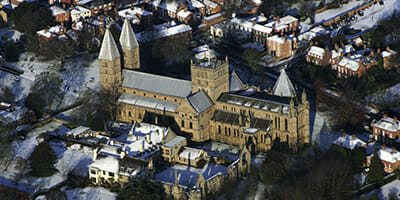 An equities-biased strategy for the Nottinghamshire Local Government Pension Scheme is against the trend for funds in the UK, but the local government scheme has no plans to de-risk as it tries to make up its funding level.

The strategy of the £3.5 billion ($5.7 billion) Nottinghamshire Local Government Pension Scheme, one of the United Kingdom’s many individual public sector pension funds, will remain biased towards equities with the fund holding steady with a 72 per cent allocation to the asset class and no plans to de-risk.

“We are a traditional Local Authority Fund with a high allocation to equities,” says Simon Cunnington in the Pensions and Treasury Management division at the fund which draws its membership from over 100 local employers in the East Midlands and with over 100,000 individual members.

“Our members like us to invest in real assets that generate economic growth and all our investments are long-term. We tend not to worry about quarterly numbers too much and we know equities are volatile, but believe they will continue to outperform other asset classes over 10-15 years.”

In a strategy Cunnington characterises as proudly independent and without any recourse to investment consultants, Nottinghamshire returned 14 per cent last year against its benchmark of 12.5 per cent, boosting assets under management by $653 million.

The equity allocation produced the best returns at 17.7 per cent followed by bonds returning 12 per cent with the fund’s UK property allocation trailing with returns of 1.8 per cent.

Around two-thirds of the equity portfolio is passively managed, mostly in-house by a team of six, but with a portion also invested via Legal and General tracker funds. The remaining third is actively managed by Schroders.

Nottinghamshire uses active management both for diversification and to improve returns, says Cunnington, proven by the in-house passively managed equity portfolio returning 10.4 per cent on a 5 year annualised basis ending September 2013 versus returns in the actively managed portfolio coming in at 12.2 per cent.

Nevertheless, it is not ignoring passive strategies and is currently stress testing all its portfolios in a benchmarking process that looks at the returns possible in passive index strategies versus the active strategies it has chosen to pursue.

“We wanted to measure the impact of our decision to invest differently,” says Cunnington. “It has kicked off a process that may see a few changes.”

One change, he says, will see a reduction in its allocation to UK gilts in favour of sterling denominated corporate bonds that will include European and US companies.

“Our bond portfolio is traditional and low risk with the majority in UK gilts. We plan to reduce our exposure to gilts because we don’t believe performance is going to be as strong going forward,” he says.

Despite the costs incurred in this strategy, Cunnington insists it is essential given Nottinghamshire’s lack of in-house expertise with the asset class. In coming months he hopes to increase the allocation to infrastructure currently made through private equity fund managers Partners Group.

Nottinghamshire is also unusual for its large property allocation accounting for 12 per cent of assets. $473 million of the property portfolio is directly held in domestic property investments managed by Aberdeen Asset Management.

“We like property over bonds because it gives a similar income, but has a better prospect of capital growth. Our UK investments did particularly well up until 2007 and although they have suffered since, we are just beginning to see a turnaround,” says Cunnington, noting that secondary property in particular has struggled.

“There is only a limited supply of prime property so values have held up here but secondary stock has fallen. The key is to keep the rents coming in.”

The remainder of the property portfolio is invested in pooled property funds in the UK and Europe.

The large equity allocation is also part of the fund’s deficit recovery program. Nottinghamshire is only 84 per cent funded but because of its buoyant cash flow, with an annual investment income of around $147 million, it can “ride out the volatility.”

Costs are kept low at the fund by a combination of in house management and a limited number of external managers.

The fund had investment management costs of 0.18 per cent net of assets in 2012-2013 and it is driven by the belief that simpler investment strategies lead to lower management fees because of less trading and transition costs.