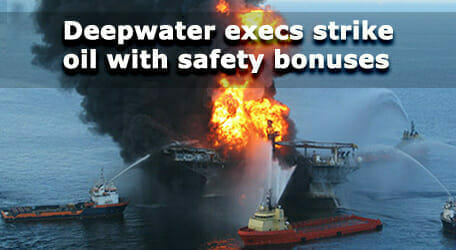 As incongruous as it sounds, executives at Transocean Ltd – the company that owns the Deepwater Horizon oil rig which exploded in the Gulf of Mexico last year killing 11 people – have been paid bonuses for their improved safety performance.

According to a company SEC filing last week, last year was its best-ever for safety, “notwithstanding the tragic loss of life in the Gulf of Mexico”.

Executives receive 25 per cent of their bonuses based on the company’s safety performance in a given year.

Last year, they were given two-thirds of this. In 2009, the company withheld all bonuses after four deaths.

The calculation for overall safety performance is not based on deaths alone, but rather the number of “incidents” and their “potential severity”.

The number of incidents fell 4 per cent in 2010 and their potential severity fell 15 per cent.

The Deepwater Horizon rig was leased by BP, which operated the rig. Transocean blames BP for the damage.

The US Government is continuing its investigation into the cause of the explosion.